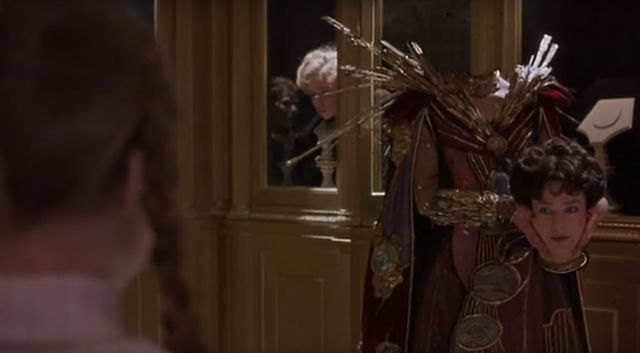 In the iconic 1985 film Return to Oz, Dorothy discovers that Oz is no longer the sparkly, technicolor spectacle she had previously known. Now it is a barren wasteland, dry and desolate, bleak and grey, even the yellow brick road a pile of rubble. Her old companions are long gone, as are any signs of human life, and so she must begin her journey alone once again.

At one point, Dorothy makes it all the way to the castle of Princess Mombi, who introduces Dorothy to her collection. As Mombi leads her deep into the closet, Dorothy is taken aback as she looks into the glass window displays and sees heads. Many heads. Blondes and brunettes, all watching curiously from their individual displays. Mombi, we soon realize, has the ability to change heads whenever it suits her and this afternoon she has chosen head #4, a stern brunette with glittering dark eyes. After returning the ethereal blonde she had been wearing to the appropriate shelf, Mombi walks, headless, to the other side of the room and unlocks the display case of #4 with a ruby key that hangs from her left wrist. Lifting the brunette from her display, Mombi places it on her exposed neck and locks it into place. With her new head, Mombi’s entire demeanor changes and, with it, her attitude towards Dorothy.

As a child of the '80s, I have always felt a strange affinity for this film, despite—or perhaps because of—how dark it is for a children’s film. But it is Mombi’s cabinet of curiosities in particular that have always captured my imagination and attention, although it took me well into my thirties to figure out why: Having the ability to put on a new persona, to adopt a mask or a change of costume, is the only thing that allows me to function in this world while having depression.

In the hours and days after the news about Kate Spade's and Anthony Bourdain's deaths, so much of the discussion about to depression and suicide focused on their individual personalities. Anthony was bold and brash while Kate built an entire brand around light and life. How could these two people, who both seemed to exude so much energy and positivity, kill themselves?

Those of us with depression understood. We didn’t know the specific whys behind the choices and circumstances that led to Kate and Anthony’s deaths, but we understood the desire they had to hide their depression from the world. We understood the need to pretend to be happy, to put on a positive attitude, a jovial exterior. We understood that big personalities are a shell in which to crouch and feel safe.

Every single morning, we wake up and put on a pleasant attitude and force a smile just so we can get through the day in one piece. Because we live in a world that doesn’t understand us and, in some cases, doesn’t want to understand or help us.

Having the ability to put on a new persona, to adopt a mask or a change of costume, is the only thing that allows me to function in this world while having depression.

Those of us with depression are the world’s greatest performance artists.

How are you today?

It’s a simple question. Or, at least, it should be. Four little words: how are you today? There’s nothing ominous or malevolent in the question. In fact, it’s such a benign question it gets asked multiple times a day, often in passing and without much thought. The barista at the coffee shop on my way into work. My colleagues as I walk through the halls to get to my desk. The waitress at the restaurant where I go for lunch. The cashier at the grocery stop where I stop on the way home.

Day after day, I am confronted with the question: “How are you today?”

But as someone who suffers from depression, this is not a benign or easy question. Because the reality is, the person asking doesn’t really want to know how I’m doing today. Just as the bank teller won’t want to know tomorrow and the receptionist didn’t want to know last week.
With family and friends who know my history, it’s different and I know I can answer honestly. Because they are asking out of a real place of concern. But many of the people who ask are doing it because this is the polite conversational script that society has constructed. It’s small talk. The issue comes when the person asking expects a scripted answer: “Fine.” “Okay.” “Great.” They don’t really want to know how I’m doing. They don’t want to hear about how it took all of my motivation to get out of bed this morning. Or that I finally took a shower after two days and consider it my greatest accomplishment of the week. They don’t want to hear about how some days I’m just so exhausted that I can barely function.

Answering honestly would break the illusion we’ve all crafted and so I continue to pretend. I pretend that I’m fine and I’m okay and I’m great. Because I know that’s what they want to hear. Over and over again, all day long, I keep up my end of the conversation and maintain the status quo.

Because imagine if I answered honestly and told the kid making my coffee that it took all of my mental and physical energy just to get out of bed and put on real clothes today. Or that I couldn’t bother to brush my hair so I just pulled it back into a ponytail. Or that I literally spent all day in bed yesterday, crying about everything and nothing.

Answering honestly would make everyone else in the room uncomfortable. I’d be at fault because I broke the illusion. I didn’t keep up my end of the scripted bargain. I overstepped the rules and told the truth. Suddenly, I’m the problem.

Which is why we continue to pretend that everything is fine. All of our energy goes into building up those personas that we hide behind. Those of us who aren’t yet ready to be honest or don’t view the world as a safe space, we reposition the masks on our faces or, like Mombi, click that new head into place and go out into the world presenting ourselves as people who are fine and are okay and are great.

But beyond just exhausting, if you do it long enough and often enough, it becomes habit. Everything is an act. Everything is a performance. Because we know that this is what we have to do in order to function in this world. For some, it requires a larger-than-life persona that shields them: the grinning comic; the brash foodie; the bright handbag designer. Hiding is a means of survival. It is a coping mechanism.

That’s all it is though: a mechanism to help us cope. It’s not a fix or a solution. And sometimes coping mechanisms stop working. The world loses its technicolor sheen and we are left living in a desolate wasteland with no means of escape except for one.

I’m tired of pretending. The weight of added personas, carefully constructed for every circumstance and situation, is wearisome and heavy. My shoulders hurt from the added pressure, my body lethargic and slow.

Over the past couple weeks, it has become safe to talk about mental health issues because it’s all anyone is talking about. I feel secure enough to peel back the curtain, to crack open the shell, and speak openly and honestly. But how long is this season going to last? What happens when the news cycle removes the spotlight from mental health disorders and I am left standing on stage, dark and cold? Do we just wait until another suicide and the media circles back?

I hope not. I hope the conversation continues. Not just for my sake, but for the sake of my fellow depression sufferers and also for our families and friends. The greatest trick the devil ever pulled was convincing the world that depression looks like extreme sadness. For many, our depression looks like bright lights and big smiles.

Last week I saw a meme going around that said, Check on your strong friend. The message, of course, was exactly what I’m speaking about here: that the person who appears the strongest may be the one most in need of help.

It’s not enough, though, to just check on them. I urge you to keep checking on them. Don’t wait until something happens before you remember to check in. Don’t do it once and think the job is done. Depression lies to us, telling us that our family and friends think we’re a burden. This is why we don’t come forward and ask for help: we don’t think people will listen.

So, yes. Check on the strong friend. But keep checking. Let them know that you are there for them. Show that you are a safe space. Help break the stigma by encouraging conversation. In a time of crisis, I am more likely to come out of hiding, more likely to drop my mask, if I know the person won’t shy away from what I show them.

Mass Shootings Are Not A Symptom Of Mental Illness

On Depression, Stigma And Learning To Listen To Yourself

Tags: depression , mental health , personal essa
Support Feminist Media!
During these troubling political times, independent feminist media is more vital than ever. If our bold, uncensored reporting on women’s issues is important to you, please consider making a donation of $5, $25, $50, or whatever you can afford, to protect and sustain BUST.com.
Thanks so much—we can’t spell BUST without U.