Valedictorian’s Mic Is Cut After She Tries To Talk About Being Sexually Assaulted At School: Link Roundup 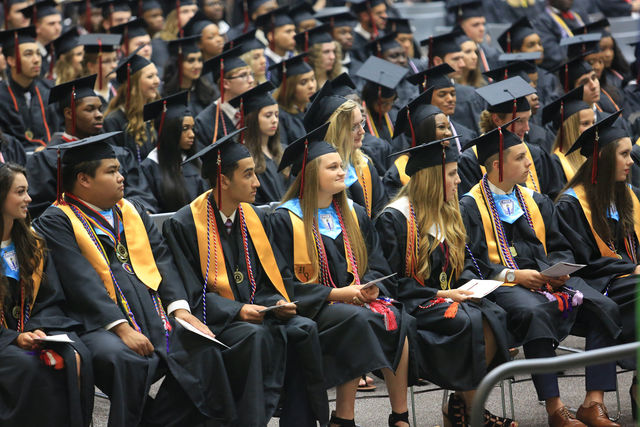 While delivering her valedictorian speech during Petaluma High School’s June 2nd graduation, senior Lulabel Seitz’s mic was muted mid-sentence as she began to discuss her experience of being sexually assaulted by another student, the Huffington Post reports. After realizing her mic was muted, Seitz finished her speech at the end of the stage to applauding classmates who chanted, “let her speak!” Seitz told the The Press Democrat that she was assaulted on campus and made a formal complaint to the school, which took no action in response. In fact, Seitz told NPR, “They specifically told me not to mention how they handled my sexual assault case and other sexual assault cases in general.”

The U.S. Citizenship and Immigration Services is now creating a new office made to locate nautralized citizens suspected of having used fraud to obtain citizenship and revoking them of it, reports the Associated Press. Director Lee Francis Cissna says an interview with the AP, “We finally have a process in place to get to the bottom of all these bad cases and start denaturalizing people who should not have been naturalized in the first place.” The office will scrutinize thousands of cases to be referred to the Department of Justice which may seek to revoke an individual’s citizenship or charge them with fraud. Splinter notes that the U.S. denaturalizing citizens is historically rare, with past efforts concentrated on expelling war criminals who lied in reports; the creation of an office for this purpose is a radical move to oppress and terrorize immigrants.

Half Of All Women Working in Science Experience Harassment

A study from the Committee on Women in Science, Engineering, and Medicine (CWSEM) reveals that as much as 50 percent of women in science are subject to harassment in the workplace. The Washington Post reports that the study compiled data over decades of research and surveys, concluding in a 300 page report involving high profile scientists and national academies charged with continuing to support members found guilty of misconduct. Surveys from the University of Texas and Pennsylvania State University school systems show that 20 percent to 50 percent of female students in science, engineering, and medicine and upwards of 50 percent of faculty reported experiences of harassment. During interviews, accounts surfaced detailing experiences of physical abuse as well as sexist remarks, jokes, and instances of microaggression; because of long standing hierarchies in place within scientific institutions, the study notes that subjects of harassment are unlikely to report their experiences for fear of retaliation.

Republican Representative Steve King endorsed anti-immigration views of British neo-Nazi Mark Collett on Tuesday. “Europe is waking up... Will America... in time?” read Collet's tweet, which King retweeted. The Huffington Post identifies Collett, an open admirer of Adolf Hitler and self proclaimed “Nazi sympathizer,” as one of Britain’s most notable white supremacists. While King’s office has declined to respond to questions of whether he endorses white nationalism, Tuesday’s tweet follows a series of bigoted remarks from King, including a tweet that read, “Diversity is not our strength. Hungarian Prime Minister Victor Orban, 'Mixing cultures will not lead to a higher quality of life but a lower one.'”

After being denied the option of a non-binary gender marker on a driver’s license last summer due to technological limitations, a Portland resident and their lawyer were invited to participate in a hearing with the Maine Bureau of Motor Vehicles, which resolved in a pivotal change this week, CBS reports. Starting Monday, Maine citizens may apply to change the gender on their ID card from male or female to “gender non-binary.” While this will only be available on a sticker for the time being, July 2019 will bring a computer upgrade that will print Maine ID cards with gender options “M,” “F,” or “X”. This move will make Maine the third state to endorse this policy following Oregon and California.

In anticipation of the lifting of a nation-wide, decades-long ban on female driving on June 24th, women in Saudi Arabia have been meeting weekly to learn how to ride motorbikes. According to Rappler, groups have been collecting at a bike skills institution for weeks, which has welcomed female citizens who have long aspired to ride in public without fear of arrest. Reversal of the ban on female drivers has been a stunning reform made by Crown Prince Mohammed bin Salman, but comes in the wake of a multitude of arrests of female activists. Agence France-Presse also quotes riders on enduring challenges in facing conservative views of male peers and families in this domain.

Paul Marciano resigned as the executive chairman of the board of Guess after the brand paid $50,000 in settlements to five women who accused the co-founder of sexual misconduct. In a company-led investigation which closed June 7th, investigators reviewed emails, social media, digital files and records and interviewed over 40 people. Guess reported in an official document, “Mr. Marciano exercised poor judgment in his communications with models and photographers and in placing himself in situations in which plausible allegations of improper conduct could, and did, arise,” the Huffington Post details. Among those who came forward with allegations of harassment by Marciano were fashion industry figures, photographers, and models, including model Kate Upton.

The Trump Administration Is Seperating Immigrant Children From Their Parents: Link Roundup