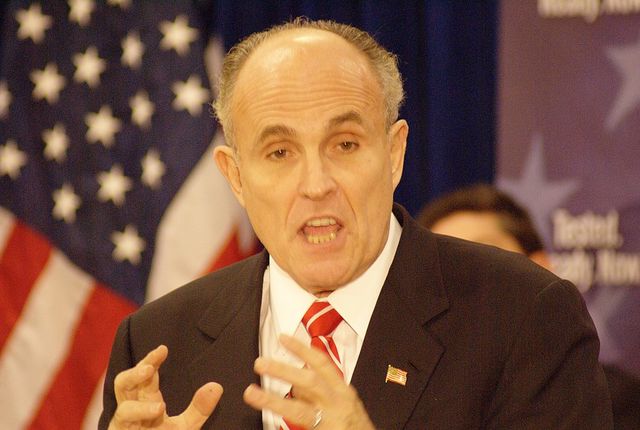 Attorney to president Donald Trump Rudy Giuliani made misogynistic remarks about adult film actress Stormy Daniels last week, making known his lack of respect for Daniels because of her profession as a sex worker.

At an event in Tel Aviv, Giuliani said,"I respect all human beings. I even have to respect criminals. But I'm sorry, I don't respect a porn star the way I respect a career woman or a woman of substance or a woman who has great respect for herself as a women and as a person and isn't going to sell her body for sexual exploitation," reports NBC. Giulian asserted his belief in self-respect being antithetical to sex work and the head scratcher that apparently a woman in such a line of work doesn’t fall under the category of “all human beings.”

Michael Avenatti, who is representing Daniels in her lawsuit against Trump, responded to Giuliani’s commentary on his client by telling MSNBC that his words, “show how ... out of touch he is with today's society, show what a pig he truly is, shows that he thinks he's above the law and above rebuke.”

Giuliani’s remarks recall comments made by Trump and his associates in reaction to undesirable publicity surrounding the president. The strategy of firing ignorant and misogynistic defenses in respose to the surfacing of ugly truths calls to mind, for instance, threats posed pre-election when The Daily Beast exposed an old account of Trump's first wife Ivana Trump detailing a violent experience during their marriage that she described as marital rape (a claim she later dropped). The Atlantic reported that Michael Cohen threatened the news source with intimidation, claiming the statements were false and adding that even if Ivana’s description was true, one cannot legally rape a spouse—a law ruled invalid in New York in (yikes!) 1984. Clearly, Avenatti’s claims that Giuliani is out of touch with modern society extend not only to the president’s attorney but to a multitude of members of Trump’s inner circle.

The offending remarks speak to Trump and co.’s enduring lack of recognition for Daniels’ credibility surrounding a civil suit filed in March, in which Daniels said she had "an intimate relationship" with Trump in 2006 and 2007 and then signed a non-disclosure contract presented by Cohen days before the election. The agreement entailed that Daniels keep silent about their relations in exchange for $130,000. Daniels opened the suit on Trump earlier this year on the grounds that he never signed the contract.