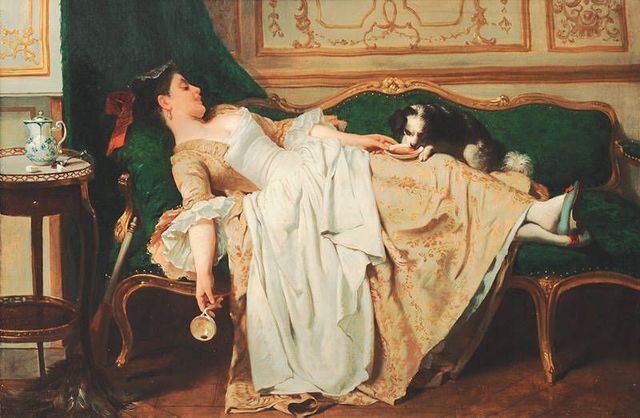 A September 8, 1840 edition of London’s Morning Post reports the “humorous story” of a case that came before a French Police Correctionelle. The plaintiff in the case, a young nursemaid by the name of Virginie, is described rather flatteringly as “an exceedingly pretty little bonne.” The defendant in the case, Virginie’s employer, a woman by the name of Madame Duchatenest, is cast in a somewhat harsher light. Described as “a meagre and parchment-cheeked virgin,” she had been called to answer the charge of having brutally assaulted Virginie with a pair of fireplace pincers.

In her testimony to the tribunal, Virginie explained that she had been out of work for some time when one of her friends advised her to check the “Petite Affiches.” It was there she found a lady advertising for the position of a children’s maid. The advertisement specified that the candidate must be “young, neat in her person, faithful, prudent, and amiable.” Considering herself possessed of all of these qualities, Virginie duly presented herself to the lady. As Virginie testified:

“The moment I saw her I could not conceal from myself my astonishment that at her age she could possibly have an infant needing the services of a bonne; but again, I reflected that she might be its grandmother.”

At this point in Virginie’s testimony, Madame Duchatenest vehemently protested, declaring that Virginie was “impertinente!” The “President” of the tribunal advised her to remain silent and not interrupt the witness, to which Madame Duchatenest countered:

“Don’t let this creature insult me, then.”

After assuring Madame that the witness would not be allowed to insult her, the President instructed Virginie to resume her testimony. Virginie then continued the tale of her initial interview with Madame Duchatenest, stating:

“Madame examined me from head to foot, inspected my hands, made me show her my teeth; in fact, I thought she would never be done with all these preliminary formalities. Then she questioned me about the country I came from, my family, tastes and habits; asked me if I was religious, if I said my prayers night and morning, if I had been vaccinated. I cannot remember half the questions she put to me. But I answered them all to her satisfaction.”

After the odd interview had concluded, Madame Duchatenest informed Virginie that the position paid 200f. in wages and that, if it suited her, she might start the following day. As Virginie testified:

“I accepted her proposal, and requested I might see ‘the little one.’ Madame replied that she would send for him, rung the bell, and, addressing the cook, said ‘Bring up Love.’ In a moment after I saw the cook enter, carrying in her arms a little griffin-dog, as frightfully ugly as it is possible to conceive.” 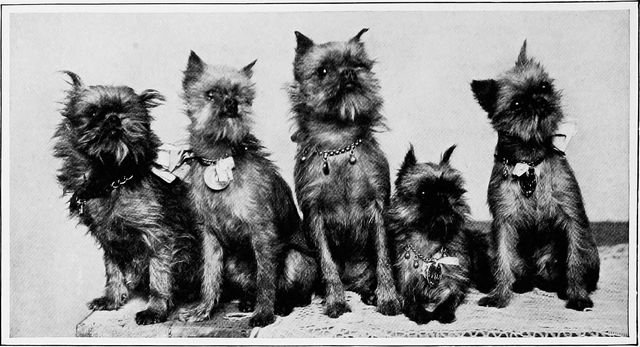 Group of Cropped Griffons from The New Book of the Dog, 1907

Virginie’s uncomplimentary description of the little dog to the tribunal was met with instant outrage on the part of Madame. The President again advised Madame to be silent and bid Virginie to continue her testimony. Virginie went on to quote Madame’s words upon presenting her with her canine charge:

“‘Here,’ said Madame, ‘is your élève. You will have to tend him, to comb him, to take him out to walk. Let me recommend you to be most kind and tender in your treatment of him. You shall be supplied with bonbons for his use, and I pray you execute all his little volontes.’”

Virginie admitted to the tribunal that she had been surprised that Madame had asked her so many questions only to entrust her with a dog who would need little more than an occasional promenade. Still, the position had not seemed that it would be a very fatiguing one and, since she had no other offers of employment at the time, Virginie accepted the post. Only then did Virginie come to understand the burdensome nature of being nursemaid to a spoiled little dog. As she testified:

“Alas! I was forced each day to submit to the most severe reproaches. If Love was disinclined to eat it was because I had made him sick. If Love snarled or barked with an apparently wicked intent it was because I had neglected to ply him with bonbons. If Love appeared sad, or even, as Madame expressed it, tinged with melancholy, it was I who had maltreated him.”

According to Virginie, Love had one besetting sin. The greedy little dog could not pass by a rubbish heap without searching through it for bones. Since Madame had instructed Virginie that she was never to oppose Love’s wishes, Virginie had become accustomed to letting the dog do as he pleased during their daily walks. This habit of indulging Love would ultimately have fatal results. According to Virginie’s testimony:

“One day a cabriolet, which was going at a very rapid rate, came in contact with Love, who was too eagerly intent upon picking his bone to take any notice of the vehicle’s approach, and the wheel passing over him killed him on the spot.” 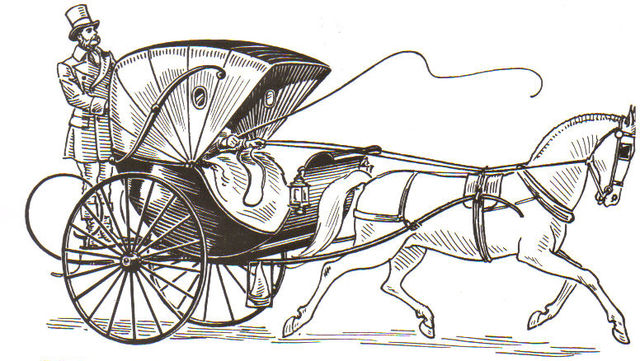 It was this incident that precipitated Madame’s violent assault upon Virginie. As Virginie testified to the tribunal:

“When I returned home, and, trembling all over, informed Madame of what had occurred, she loaded me with abuse, and, seizing a pair of pincers which lay on the mantelpiece, struck me several blows with it, and even hit me on the face; I have had my right eye quite black. A little higher, and she would have infallibly knocked it out.”

Disturbed by this account the President turned to Madame Duchatenest and demanded to know how she could have inflicted such brutality on her servant. Madame promptly replied:

“The Monster! I should have killed her, as she suffered my poor Love to be killed. Had you but seen him, so gentil, so espiègle, so spirituel.”

The President responded to this outburst severely, stating:

“We do not sit here to hear the eulogium of your dog. Have you any statement to make in your own justification?”

Madame did not answer his question. Instead, she told the tribunal that she had had Love stuffed in order to preserve his spiritual countenance. As the Morning Post relates:

“The President, notwithstanding all his efforts, could not succeed in extracting one word of explanation from the defendant, who continued, however, without intermission, a most eloquent funeral oration on her lap-dog.”

It was during the delivery of Madame’s eulogy for her deceased dog that the tribunal deliberated and came to their decision. They found in favor of the injured plaintiff, awarding her 150t in damages. 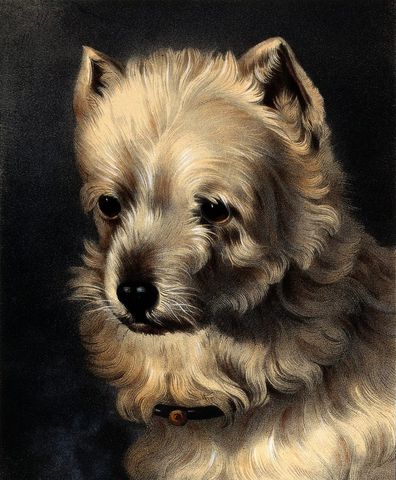 The Head of a Griffon Dog by J. B. A. Lafosse after W. Barraud, mid-19th century. (Image via Wellcome Library.

Victorian Advice On Breaking A Betrothal The Polite Way

Tags: victorian , dog nurse , France , nursemaid , history
Support Feminist Media!
During these troubling political times, independent feminist media is more vital than ever. If our bold, uncensored reporting on women’s issues is important to you, please consider making a donation of $5, $25, $50, or whatever you can afford, to protect and sustain BUST.com.
Thanks so much—we can’t spell BUST without U.