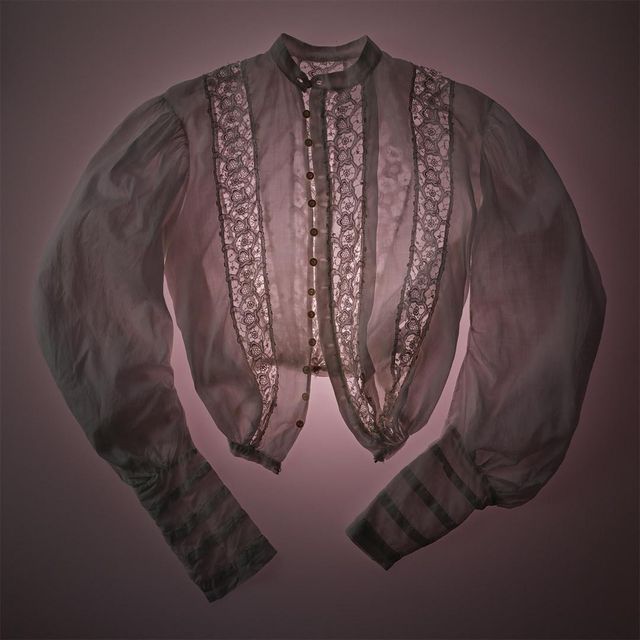 At the turn of the 20th century, the most popular piece in a woman’s wardrobe was the shirtwaist. A gauzy blouse made of cotton or linen, it mimicked a man’s shirt, albeit one decorated with lace or embroidery, and often featured bell sleeves. It was, in the words of a 1902 Good Housekeeping article, “simple, inexpensive, useful, practical, [and] universally becoming.” Wearing one brought “freedom of body and elasticity of spirit,” and as such, “profoundly affected the lives and customs of women.”

This wasn’t mere magazine hyperbole. As women cast off old roles and stepped into the greater world, the shirtwaist was exactly the right garment for the times. A shirtwaist under an open jacket was “particularly favorable to the putting off of corsets,” noted The New York Times in 1894. Dressed in such an outfit, a woman who carried herself well, might “go the length of Broadway without her corsetless condition being suspected.”

Sportswomen, too, reached for what The Times in June, 1894, identified as “The Comfortable Shirt Waist” in a caption for an illustration of a woman golfer. A shirtwaist tucked into a skirt was likewise the uniform of choice for the female stenographers and typists who flooded into offices around the same time.

Women’s magazines provided patterns for those who wanted to sew their own, but part of the shirtwaist’s appeal was that it was affordable and readily available off the rack. Macy’s offered a wide array in 1898; prices ranged from cotton percale at 29 cents to luxurious black Alpaca at $1.24 (roughly equivalent today to $8 and $34 respectively). And a department store in Burlington, VT, had them as low as 19 cents that year (about $5 nowadays).

Much like today, these cheap garments came at a cost to the young women—most of them immigrants and teenagers—who worked sewing shirtwaists at one of hundreds of New York City factories. Working conditions were crowded, overflowing bins of fabric presented fire hazards, and wages were low (around $5 a week, including weekends). One factory posted a sign in an elevator on Saturday afternoons that read: “If you don’t come in on Sunday, you need not come in on Monday.” Some factories fined workers for talking, laughing, or smiling. If a worker was three minutes late, she might find herself locked out until after the noon break, and docked the morning’s wages. She could also be fined if she took a half-day absence—on top of her lost pay, of course. A massive 1909 shirtwaist-makers strike that drew between 20,000 and 40,000 women and men, led by 23-year-old organizer Clara Lemlich, resulted in union contracts and better conditions for many workers—but not all. On March 25, 1911, a fire swept through the anti-union Triangle Waist Company. With many of their exits locked to prevent workers from taking unauthorized breaks or stealing goods, 146 workers died, 123 of them women.

The True Price Of Fast Fashion

10 Ethical Companies That Will Help You Ditch Fast Fashion