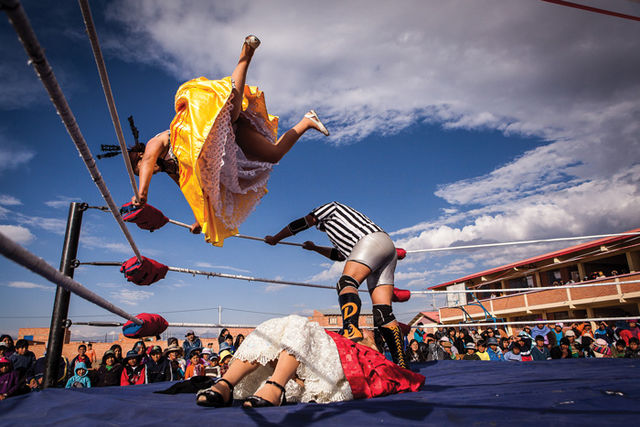 Silvina La Poderosa jumps from the corner of the ring to land on her opponent, Reyna Torres, during an exhibition fight in Senkata, El Alto

I’m standing in Murillo Plaza, in central La Paz. It’s the center of city life, surrounded by state buildings and Bolivia’s presidential palace. The big round clock on the palace strikes four. The clock is a mirror image of a traditional clock, and the hands run counterclockwise. I want to find out why, but first I will have to experience some of the newest and oldest — cleanest and dirtiest — parts of the city. The woman who puts me on this path goes by the name of Angela La Folklorista.

She calls herself “una mujer de la pollera.” Woman of the skirt. That’s another way of saying, “I’m a cholita.” Cholitas are indigenous women of Bolivia, usually ethnically Quechuan or Ayamaran. You can recognize cholitas by their pollera (multi-layered, ankle-length, colorful skirts), braided hair, and tiny bowler hats, which seem like they’ll fall off any minute. “That’s the only pride we have, is to be Bolivian women,” Angela says in Spanish. “Brave women, with a lot of strength.”

In the past, women who wore the pollera were repressed, isolated, boxed out from higher education, and often stuck cleaning homes. “This is not something you would see before. Men were very racist,” Angela says. “They didn’t want to see women of the skirt. They would say, ‘They’re only for the kitchen.’” Where Angela works is nothing like a kitchen. 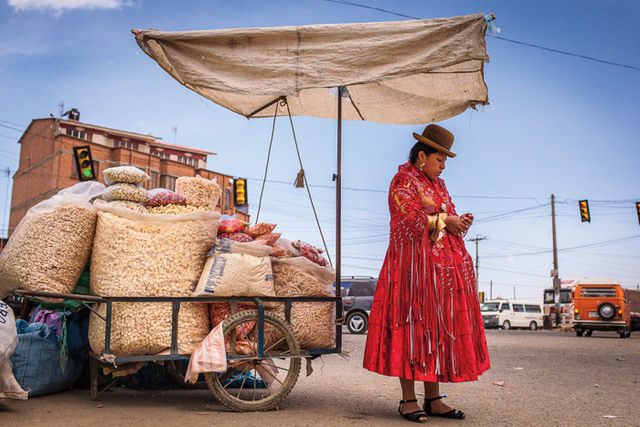 Reyna Torres, 22, waits at an intersection in the city of El Alto for her fellow cholitas, so they can go together to a fight in Senkata

“In the ring,” Angela says, “I have a technical fighter style. I’m not rough. I’m on the nice side. There are bad cholitas, as you would call them, but my style is technical.”

Angela is a cholita luchadora—a Bolivian pro-wrestler. She fights in a league similar to Lucha Libre in Mexico or the WWE in the United States. It’s the kind of wrestling with heroes and villains with entrance songs. Angela gives me two ringside tickets for the upcoming bout in El Alto—La Paz’s sister city. She’s the headliner. 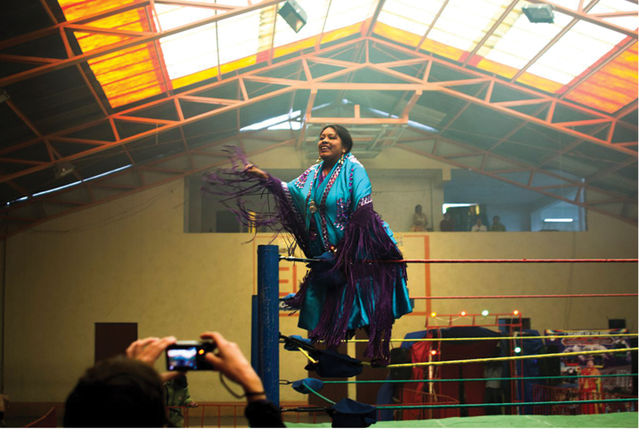 Angela La Folklorista in the ring

Cholitas luchadoras began wrestling when a fighter and promoter, Juan Mamani, had the idea to put cholitas in the ring to attract the public. It went well—at least for Mamani himself, who kept most of the money. After years of exploitation, the women decided to leave and take control of their destiny. In July 2014, they formed their own association, Diosas del Ring, or Goddesses of the Ring.

To be able to wrestle, a cholita has to complete a year of training. If she makes it through that year she is allowed to step into the ring. But the hardest part of being a cholita is getting boyfriends and husbands to accept the sport, and many cholitas are separated or divorced. They fight inside and outside the ring for their freedom as women.

Not everything in the ring is a spectacle. The falls and blows are real, and even if the cholitas are friends outside the ring, inside, they take their sport seriously. They wrestle for the fame and glamour, because they don’t make much money. They have to cover the rent for the space, ring, transportation, and—when they can afford it—insurance. On a normal Sunday, cholitas can earn between 150 and 200 Bolivianos, or about $20 - $28 USD. 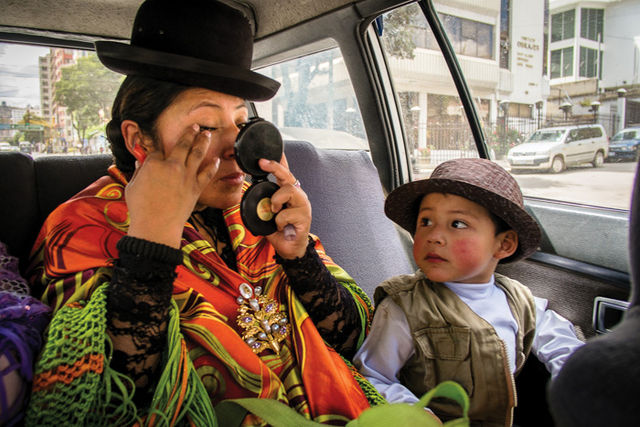 Leader of the Wrestling Cholitas Mary Llanos Sanz, 31, best know as Juanita La Cariñosa (The Sweet One), puts on makeup during a taxi ride on the way to a fight, while her son watches

To get to El Alto—Spanish for “the Heights”—I soar above the city on La Paz’s newly built gondola system. El Alto has an elevation of almost 14,000 feet. It feels like I’m disappearing into the sky.

From up here, you can see Bolivia’s poverty. A river of sewage splits the city in two. On the outskirts, filthy sheep scavenge through garbage. Riding in this space-age air trolley feels absurd. But a new public transportation system is just one of President Evo Morales’ radical ideas for South America’s poorest country. Evo, as most people call him, is Bolivia’s first indigenous president. He’s made a lot of changes since coming into office in 2005, especially for cholitas like Angela.

“He has opened this historical moment,” says Claudia Espinoza. Espinoza is the Bolivian Deputy Minister of Communications. “Cholitas are now occupying many public positions,” she explains. “They have conquered many spaces in many different institutions of the state and society. They are also in many instances the head of households. We have many congresswomen and senators, ministers, vice ministers.”

Cholitas like Silvia Lazarte, for example. She helped draft the country’s new constitution. Justa Canaviri, another cholita, is a nationally-known celebrity chef. And journalist Remedios Loza broke ethnic barriers with her radio and TV shows. 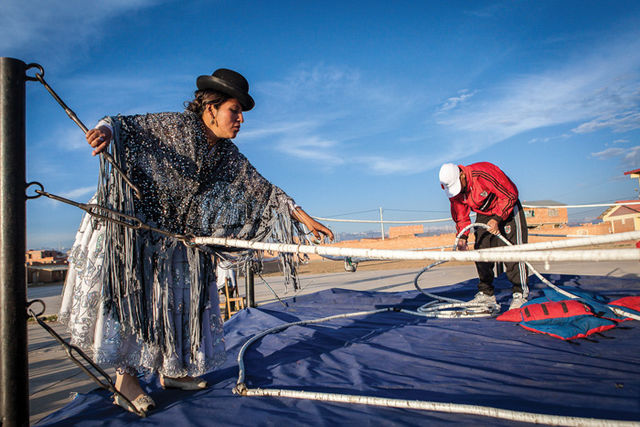 Juanita La Cariñosa helps take down the ring after an exhibition fight in Senkata, El Alto. Due to the low budget, all the fighters help out.

The gondola empties out into a sprawling market of tarp tents and barrel fires. Hunched shopkeepers hawk fried fish and cheap underwear all day long. Almost all of them are cholitas. When not speaking to customers, they speak mostly Ayamara. No one knows how long the language has been spoken here. “When the Spaniards arrived,” Espinoza says, “they arrived in violence, especially against the indigenous peoples and against women.”

Espinoza tells me that the clock in Murillo Plaza runs backwards because it is counting back the days and years to the time before the Spanish came to South America. For Evo and his followers, Bolivia’s history doesn’t start in 1825, when his country gained independence from Spain; it starts in 1532, when the Spanish conquered the Incan empire. The rise of the cholitas has been 500 years in the making.

“Today, indigenous women have a transcendent value in our political, economic, and social lives,” says Espinoza. “They are our symbols as well, representing how we have been able to overcome colonialism and are advancing toward de-colonialism. The cholitas luchadoras create a different image of Bolivia. They provide a sense of modernism, post-modernism, by practicing this type of activity that previously didn’t exist in our country.” 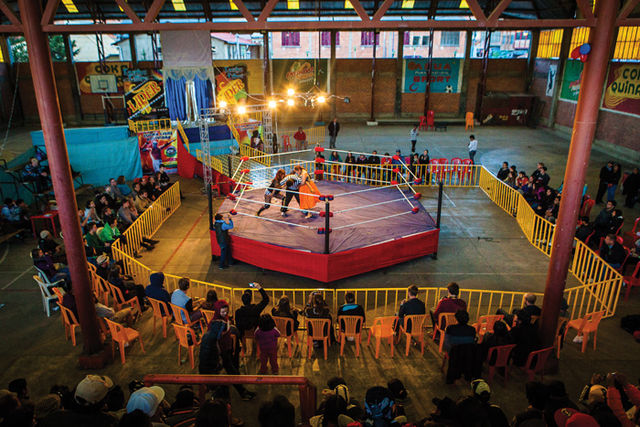 The ring of the Sports Complex, where the cholitas fight every Sunday. The fights attract many Bolivians and tourists. Tourists pay five times higher prices to sit in the front rows on plastic chairs, while the locals sit on the cement stands

Women of the skirt take the ring

A giant poster of Angela, fists up, greets me at the entrance to the arena. It’s not Madison Square Garden; the venue looks like a high school basketball court. There are no more than a couple hundred fans. But when the wrestlers start their entrances—flexing their muscles in time with blasting music—the fans go wild.

At first it’s just men. A guy in camo takes on the ref. Then the ref gets battered by a dude in a blue jump-suit. In another fight, a mummy chases a wrestler into the stands. There’s fake blood everywhere. Somebody gets lit on fire. Chairs gets broken. The fans are only a few feet away from the carnage. It’s a liability lawyer’s dream come true.

Angela is the final cholita to enter the ring. But she doesn’t fight the other women. She fights the men. There’s some weird sexist stuff happening, but by the end of the match, Angela is always the winner. I find her after the fight. “I’m very happy and content to have another night of fighting,” she says. “Another night of art, adrenaline, and strength. Another night that I’m in the center of the ring, happy, doing what I like most.” She’s covered in sweat.

“Mi madre es luchadora,” Angela’s middle school-aged daughter, Theresa, says. “My mother is a wrestler. It’s a pleasure for me that she’s a wrestler. I’m very proud of her, I’m her number-one fan.” Theresa describes the cholitas luchadoras as one of the Seven Wonders of the World. But she doesn’t want her mom’s job. It’s too dangerous for her. And unlike the cholitas who came before her, Theresa can choose her own dream.

By Asa Merritt (@asamakesnews), with additional reporting by Eduardo Leal

Photos by by Eduardo Leal

"A Latina In Museums" Is Smashing Stereotypes About The Art World

Kate Nash On Wrestling In "GLOW": "It Brought Me A New Relationship With My Body"