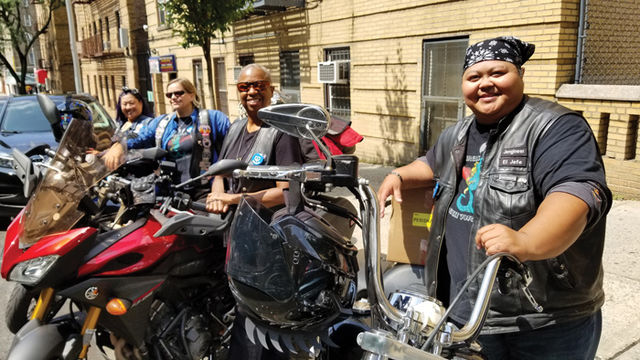 SirensJennifer Bacquial (right) and her fellow Sirens on a milk delivery

Two years ago, Julie Bouchet-Horwitz, founder of the NY Milk Bank, sent an email to Jennifer Bacquial, the president of the Sirens Women’s Motorcycle Club in New York City, with an unusual request. Would the bikers be interested in delivering breast milk to hospitals and private homes on behalf of the NY Milk Bank? “I told her to give me a call. We talked. I was clueless. I didn’t even know milk donation was a thing,” says Bacquial. But once she learned how crucial it is for premature and sick babies to acquire donated breast milk immediately, Bacquial agreed to ask her fellow Sirens at their next meeting, and the response was enthusiastic. “We try to focus our charitable work on women’s issues. Plus, we could do the work while we were on our motorcycles, which is even better,” she says.

The NY Milk Bank opened in 2016 in Westchester County, NY, and it coordinates the distribution of pasteurized human donor milk to hospitals and homes around New York State and the five boroughs. When Bouchet-Horwitz first opened the bank, she used FedEx to deliver the milk, but the shipping costs were too high for the nonprofit. After watching motorcyclists zip through N.Y.C. traffic, she decided bikers were her best bet to get breast milk delivered fast.

Using a WhatsApp group chat, Bouchet-Horwitz posts a delivery location and an available Siren will respond. “During business hours, we do deliveries from the Milk Bank to hospitals or private homes. Sometimes, a NICU will run out and need more milk. We’re there to help,” says Bacquial. Currently, about 10 to 15 Sirens, who’ve dubbed themselves “Milk Riders,” volunteer to transport breast milk. And Bacquial has personally seen the impact of their work. “One woman I met in the Bronx, her daughter was born six months premature. The baby’s digestive system couldn’t handle formula and her mom wasn’t producing enough milk. She relies on the Milk Bank. When I first met this baby, she couldn’t hold her head up. Now, she’s sitting up and thriving because of the milk. We love to ride our bikes, and to see the mothers and children who are impacted is cool.”

This Video About Breastfeeding Shame Will Blow You Away