Inside The "House Of Collection," A Brooklyn Loft Filled With Vintage Oddities 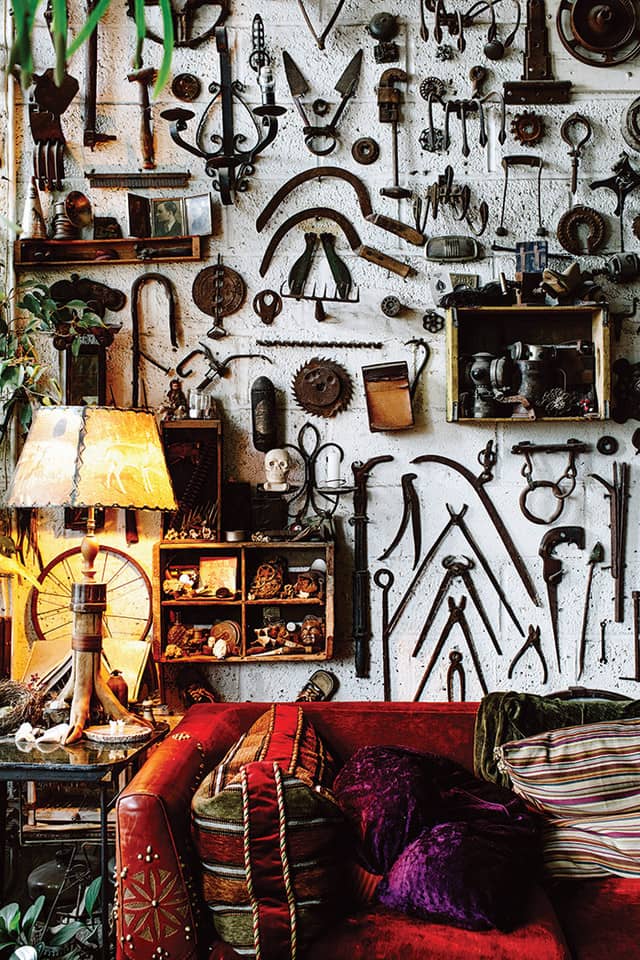 When you first walk into Paige Stevenson’s Brooklyn loft, appropriately dubbed the “House of Collection,” you are greeted by a wall of vintage toys. Step further in, and your eyes go to a massive jungle of lush plants on a raised platform. A nearby study features floor-to-ceiling bookshelves, an old piano, and glass cases filled with taxidermy, vintage razor blade boxes, tiny doll heads, and other oddities. In fact, Stevenson displays similar objects in every nook of the loft — old glass bottles found at a beach in Brooklyn line the windowsills, vintage kitchen utensils and gadgets hang over the stove. She even occasionally sees something she’s never noticed before. “Guests will sometimes hide things here,” the 50-year-old bookkeeper says. “All of a sudden, it’ll be like, Wait, I’ve never seen that before! I get to go exploring in my own home.” 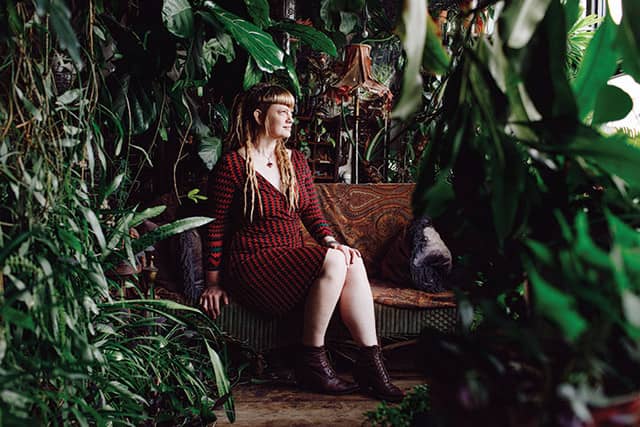 When she moved in to the loft more than 28 years ago, it was a large, raw space housing 10 people. After winning a 12-year court battle for rent stabilization, Stevenson now lives alone with her collections. But all the people in her life have helped create the space, adding to the home a little at a time. The fact that most of her friends’ places are small helps a lot, too. “Nobody has room for shit in their place in New York,” she says. Redecoration is typically inspired by new acquisitions. “My friend gave me this chemistry glass collection and I didn’t really have a good space for it, so I just re-did the bathroom wall,” she says. (Pro tip: when redoing a space, take everything down and revamp it completely, “you really can get more of an overall composition and a purposeful look to it,” she says.) The garden area was the result of a roommate switch up. “She got this dracaena and a couple other plants from this yoga studio that was closing down. When she moved out I just sort of took it on,” Stevenson says. “At a certain point, it became a real passion and I starting acquiring plants, although I have to be honest that I’ve probably killed as many as I’ve kept alive.” A hose winds through the space, so she can water the massive indoor garden twice a week. 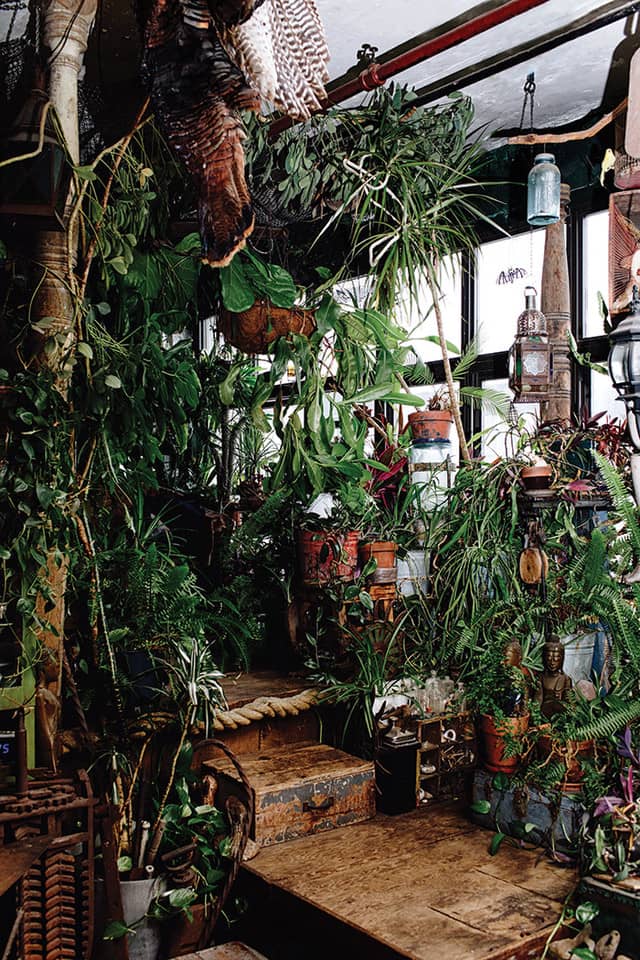 The entrance to the lush garden area

Not all of the loft’s curiosities were gifted. “The bathroom floor is all done with river shale that I harvested from a place in Tennessee that’s close to the Radical Faerie Sanctuary that I’ve been going to for years,” she says, referring to her favorite queer pagan retreat. A friend helped her treat each stone with polyurethane before installing them. Other personally scavenged collections include used ballet shoes, gathered from a ballet school, and a pillar in the center of the main room is mounted with upside-down forest-foraged tree mushrooms that serve as shelves. 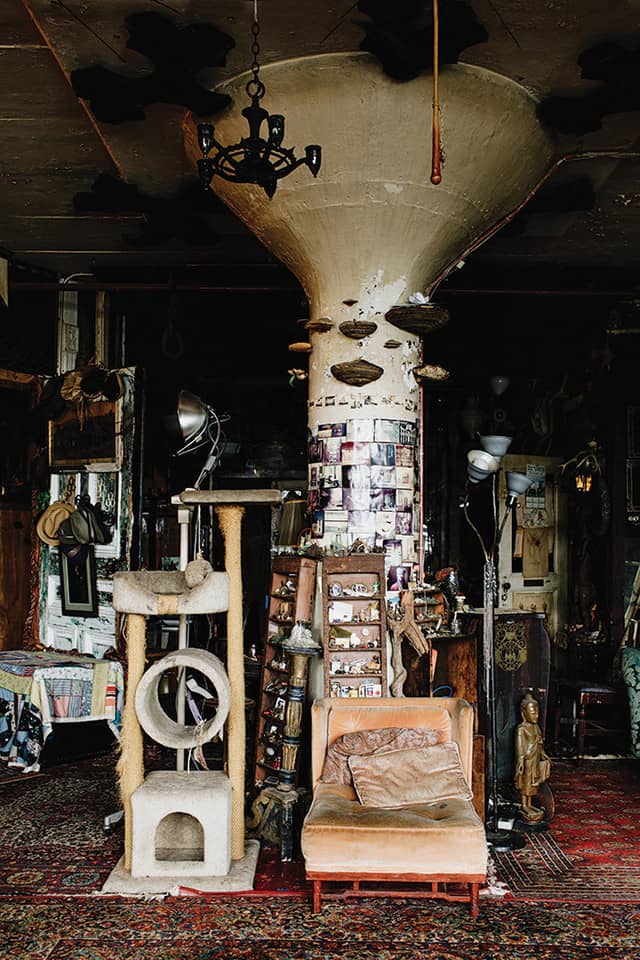 Mushrooms attached to a column create shelves, and mimic a giant mushroom

“I’m pretty good about wiring stuff up,” Stevenson explains about her favored display technique of wrapping wire around a screw and an item to mount it to the wall. “One of the things that’s actually challenging is getting these angles, and you see that I don’t always succeed. It’s just a little wire around everything, and tighten, tighten, tighten to create a tension that holds stuff in place,” she says. “ I try to get every spot to have a kind of interesting energy to it, where the eye travels, and there’s a little bit of flow.” She doesn’t get too hung up on things being perfect, instead going for planned chaos. 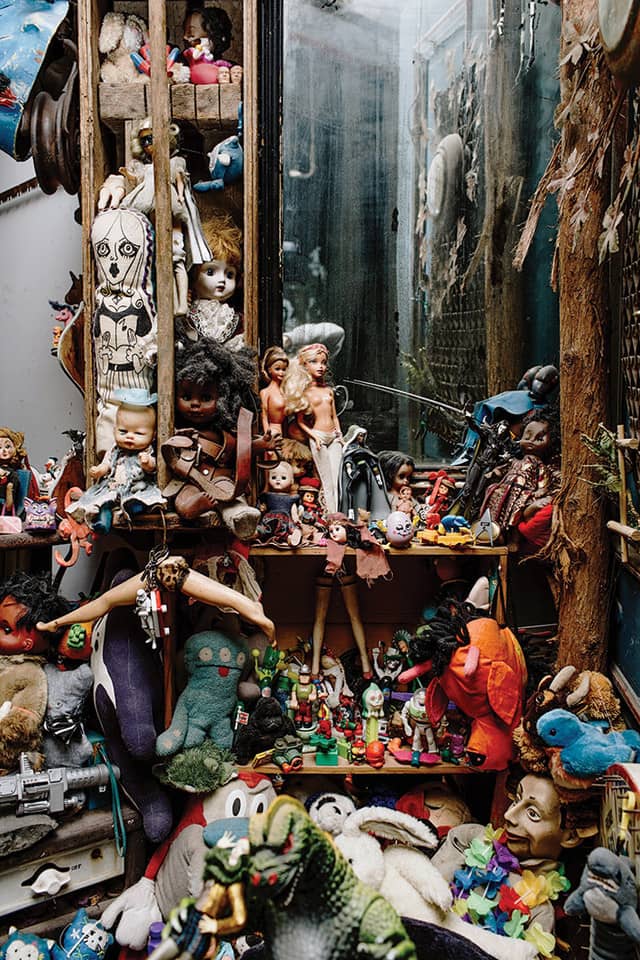 Vintage toys in the entryway

Stevenson admits some people may find her aesthetic intimidating because of all the sharp tools and dead things. Taxidermy pieces are peppered throughout the space: a striking rattlesnake, a mummified cat she found preserved in a box. “For me, that’s just sort of an Americana tradition,” she says. “I’m not morbid, really, I’m just intrigued by everything.” She still manages to maintain an open and friendly vibe throughout the house, explaining, “I like to not take it so seriously, I have some playful touches.” At the end of the day, it’s not the items themselves that are important to her. “It’s about the art of collecting and curating and creating, breathing new life into objects. It’s upcycling,” she says. “ The secret of the House of Collection is that it’s a house of people more than anything else.” 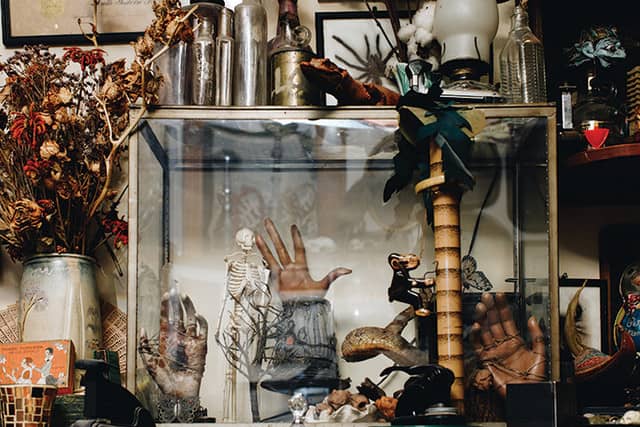 In the study an aquarium filled with fake hands, doll hands, and a taxidermy snake blends into its surroundings 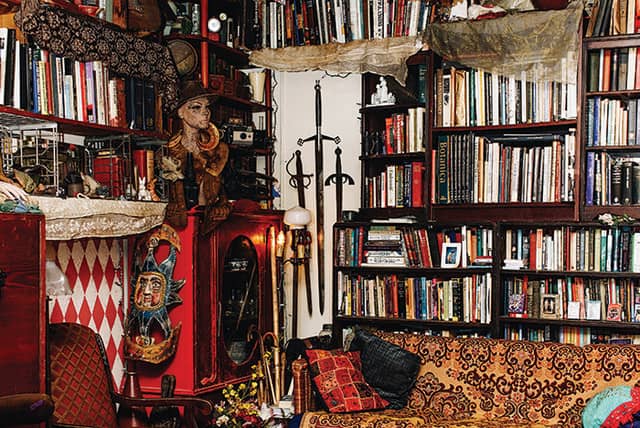 A corner of the study showcases tons of books, a cluster of swords, and vintage swords 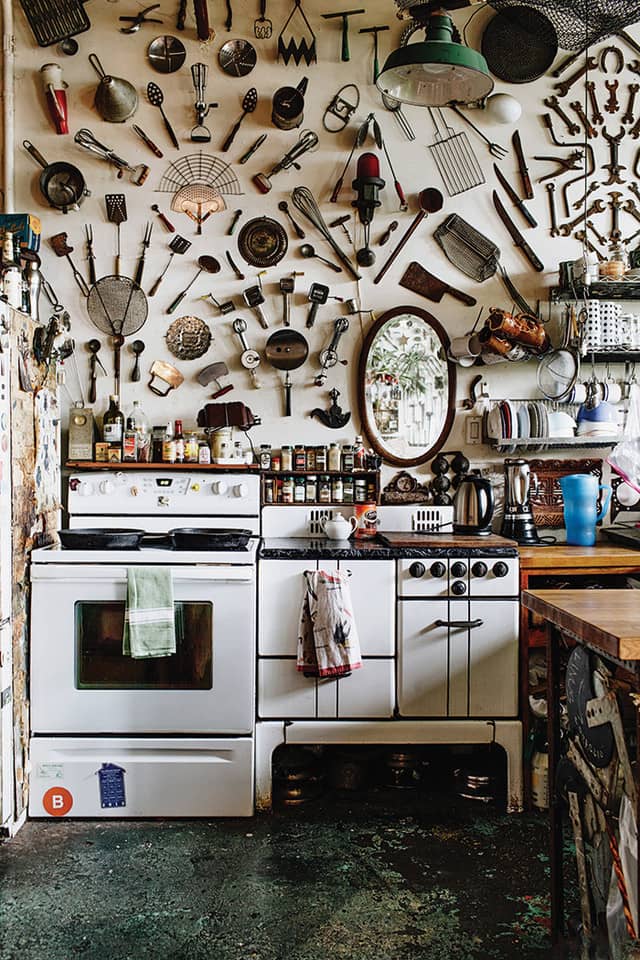 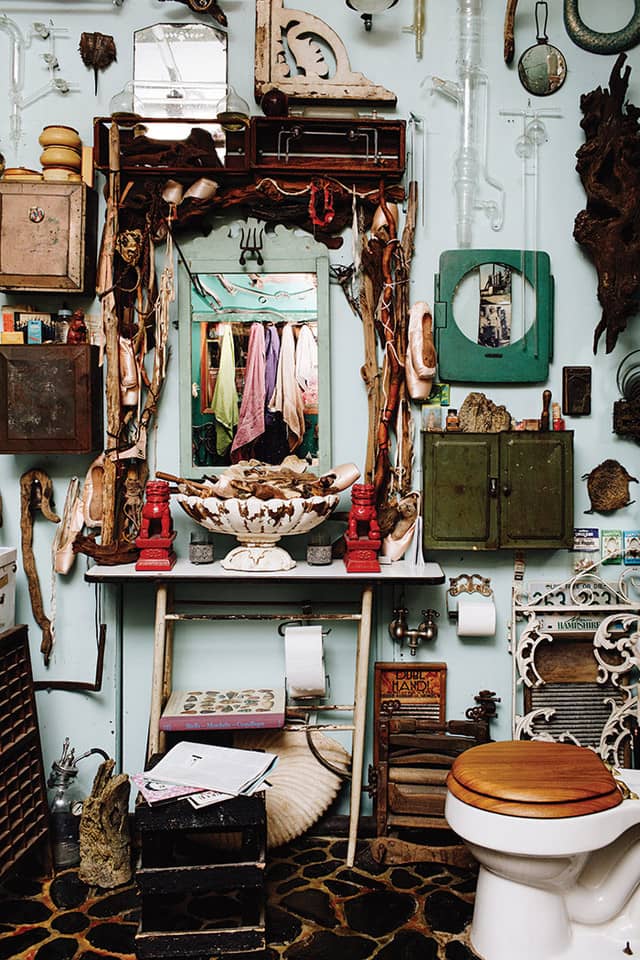 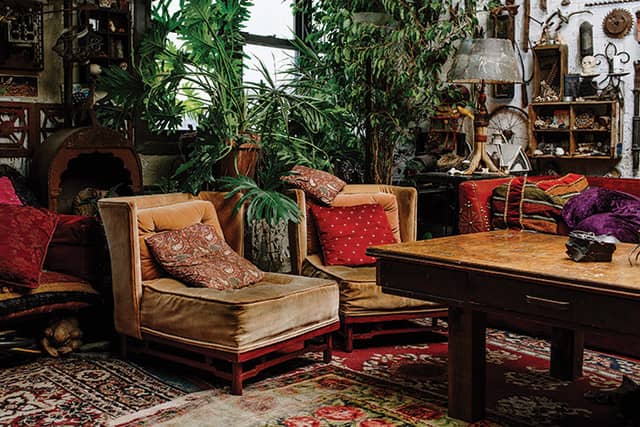 5 Steps That Will Turn Your Home Into A Gorgeous Jungle

5 Home Accessories To Make Your Crib As Cute As You

Tags: Callie Watts , Paige Stevenson , House of Collections , Brooklyn , treasure , treasure hunt , vintage , house
Support Feminist Media!
During these troubling political times, independent feminist media is more vital than ever. If our bold, uncensored reporting on women’s issues is important to you, please consider making a donation of $5, $25, $50, or whatever you can afford, to protect and sustain BUST.com.
Thanks so much—we can’t spell BUST without U.