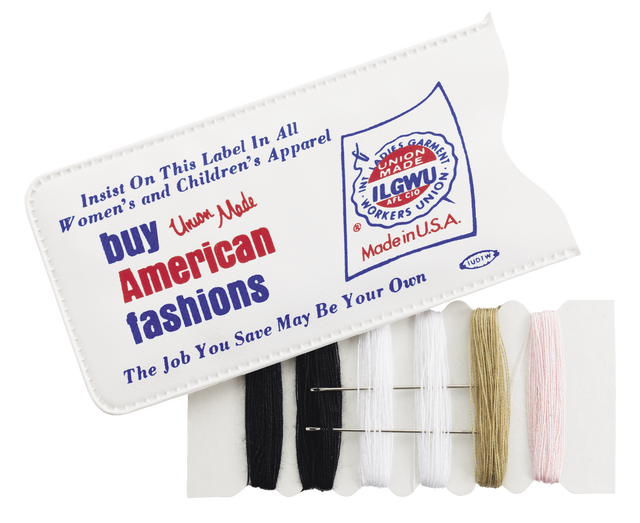 Ask anyone who watched TV in the mid-’70s to early ’80s what the words “look for the union label” mean to them, and don’t be surprised if they burst out singing the following lyrics to a tune highly reminiscent of Jerome Kern’s classic “Look for the Silver Lining”:

Look for the union label
When you are buying a coat, dress, or blouse,
Remember somewhere our union’s sewing,
Our wages going to feed the kids and run the house,
We work hard, but who’s complaining?
Thanks to the ILG, we’re paying our way,
So always look for the union label,
It says we’re able to make it in the USA!

“ILG” was short for “ILGWU,” the International Ladies Garment Workers’ Union. The group was founded on June 3, 1900, bringing together about 2000 members from 7 local unions, who sought to improve conditions for workers in the ladies’ garment industry at the national level.

These workers were largely women and girls, usually immigrants, who sewed the popular blouses called “shirtwaists” or “waists” and other items of women’s and children’s clothing in crowded factories known as sweatshops. Hours were excessively long (an early union action called for a 54-hour work week), and wages were low. Conditions were unsanitary and frequently dangerous (the 1911 fire at the Triangle Waist Company, a non-union shop, killed 146 workers, 123 of them women). Labeling clothing helped consumers identify union-made items and to make “a conscientious objection to buying goods the low prices of which are achieved by grinding the workers at shamefully inadequate wages,” a New York Times editorial explained in 1913.

The ILGWU adopted a label at its start in 1900, but few companies complied with its use. Other iterations of the label were used during the New Deal and afterward, but the first garment-industry-wide label was introduced on January 9, 1959. Mrs. Nelson A. Rockefeller (wife of New York’s governor) publicly sewed it into a piece of women’s clothing. Similar events were held throughout the United States, with the wives of mayors or governors participating as their husbands looked on. (Men were part of the ILGWU as well, but the vast majority of rank-and-file members during the union’s history were female. Problematically, while women served on local boards, men held the national leadership positions. People of color held few positions of power at any level.)

In the mid-1970s, the ILGWU embarked on a nationwide advertising campaign focused on the union label in a last ditch effort to combat the double problem of shrinking membership and increasing clothing imports. Convention swag (pocket sewing kits like the one pictured, jigsaw puzzles, key chains, etc.) emblazoned with a new red, white, and blue label showed member pride while reminding workers and consumers to buy American.

The “Look for the Union Label” ads were part of this strategy. The jingle was written by an ad agency, but real-life union members did the speaking and singing. The television spots were “forceful, sincere, and effective” said a Los Angeles Times reviewer in 1976, after they appeared on that year’s Academy Awards program.

None of it, however, could reverse hard economic realities. The ILGWU ceased to exist as an independent entity in 1995. Nowadays, the only place you’ll find the ILGWU label is in vintage clothing, where it can be used to estimate its date of manufacture.

Therapy: There's An App For That

I Contacted My Elementary School Crush And This Is What Happened