This Is Your Brain On Virtual Reality 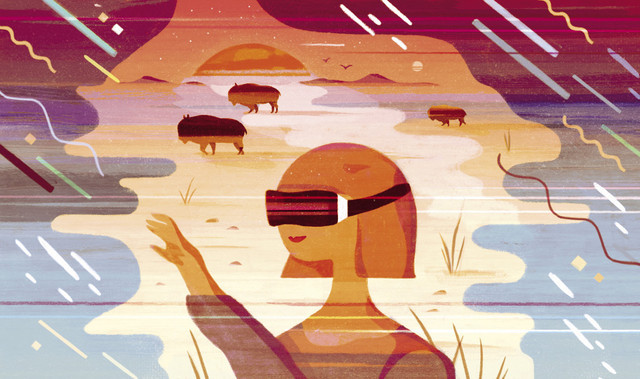 Virtual reality is finally an actual reality. Here’s why you need to try it.

You’re in someone’s kitchen in the Gaza strip. To your right, a woman is busy cooking, while another woman tells you about her life here. You look down and admire the tiled floor, then turn around and check out the appliances. Next, you’re standing alone on a giant plain. The sun is setting, and when you look up, you see that there isn’t a cloud in the sky. In front of you, a herd of bison is making its way across the plain. A few curious animals come up to you. They sniff you and lick your face, decide you’re no threat, and the herd moves on. It isn’t hard to find your way home from either of these far-flung locales: you just take off your headset. After all, you’ve been sitting in your own living room the entire time.

This is what watching a VR (Virtual Reality) video is like. With a VR headset on, you can watch any of a growing number of 3D, 360-degree movies that can make you feel like you’re anywhere—from being underwater swimming with dolphins, to being surrounded by celebs at the taping of SNL’s 40th Anniversary Show. Best of all, getting started with VR isn’t very costly. Most VR videos are free, viewed using an app on your smartphone, such as NYT VR and Vrse. You only need headphones or earbuds and a VR headset. If you’re an iPhone user, your choices include a $15 cardboard version from Google, a $30 plastic version from View-Master, and a $120 higher-end version made by Zeiss (we recommend this one). Samsung owners have even more options.

The experience could use some improvements—the resolution of the images isn’t what it should be, and some folks report feeling nauseous after watching for too long. But VR is here, and it’s here to stay. The New York Times is investing heavily in the technology, as is Google, along with many other content and gaming brands. In fact, the world of gaming is already making VR headsets, run by computers instead of iPhones, that are able to create a much better viewing experience, and which can include more interaction.

Right now, people are trying to figure out what the best use of this new storytelling platform will be. Will it become merely a more immersive way to play shoot-’em-up video games or watch porn? Or will it be used to take us to places we would never otherwise visit, or give us a chance to see the world through the eyes of other ethnicities, ages, or genders? No one knows. But there is one thing we do know: consumers of VR will end up determining what its uses will be, and according to a survey conducted by UK firm Invest Bristol & Bath, there is more excitement about the technology among men than among women. Perhaps that’s because VR has close associations with the gaming world—where there are one and a half times as many males as females. As a result, VR runs the risk of becoming yet another medium aimed more at men than women; telling more of their stories than ours. That’s why we ladies need to go out and get those headsets on—so that when it comes to virtual reality, ignoring us will be virtually impossible.

My Flip Phone Is My Most Prized Possession