Sasheer Zamata On Her Favorite Place In Brooklyn 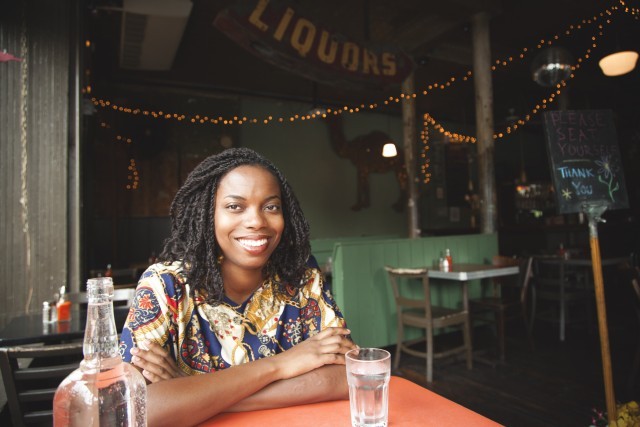 We're excited to share this interview with Sasheer Zamata from the new book Meet The Regulars: The People of Brooklyn and the Places They Love by Joshua D. Fisher.

A few years back, when she lived in the neighborhood, Sasheer Zamata was at Enid’s weekly. During those four years, Sasheer would go to the hipster bar turned hipster-parent-with-hipster-babies bar/restaurant for everything from brunch to birthday drinks to meetings with prospective managers. She’s also had a lot of dates here, she tells me. (Don’t worry, we get into that...) Like a lot of people lately, Sasheer was ultimately priced out of the neighborhood — Enid’s stands on the border of Greenpoint and Williamsburg. Unlike a lot of people, Sasheer eventually scored a gig on a legendary little TV show called Saturday Night Live. So, she can now afford to live alone in Fort Greene rather than room with a revolving door of comics in illegal apartments with bedrooms without windows, as she used to do. Nowadays, she visits Enid’s monthly.

As you may recall, her hiring process was a public fiasco because, as Sasheer tells me, more than other shows, “the audience feels an ownership of this show.” Fortunately for her, the twenty-nine-year-old actress and stand-up comedian who also performs improv and sketch came out glowing. If you’ve seen her recent stand-up, you’d also know that she has even more to offer — in particular an evolving and very personal take on the politics of race and gender in America today.

While she usually goes with the mac ’n’ cheese, today Sasheer enjoys a tomato and kale frittata while I chow down on some tasty and crispy chilaquiles. Though she’s a TV star, she’s not above our trying each other’s dishes. Sasheer was born on an Air Force base in Tokyo, brought to Indianapolis to grow up, and then schooled in Virginia for college. Now she feels at home in Brooklyn and “can’t imagine ever living anywhere else in New York,” she says. Enid’s has always been a special place for her, as it was one of the first places to really connect her with Brooklyn. That’s fitting because Enid’s has both been a seminal New Brooklyn hangout and weathered the increasingly powerful forces of Gentrifying Brooklyn. It’s gone from the place to party all night and brunch the following afternoon (Brunch in the morning? Not with this hangover.) to expanding the menu to baby-friendly breakfast, lunch, and dinner. Enid’s never lost its fangs, though, as Sasheer saw for herself, “I came once for late-night action. It transforms into a totally different place,” she says. “It was hip-hop night, there was a DJ, and it was really crowded. I was like, this is not what I want right now.” Not that she’s not into “pumping it up,” she says. Sasheer likes to dance and party, but she comes to Enid’s for something more chill: 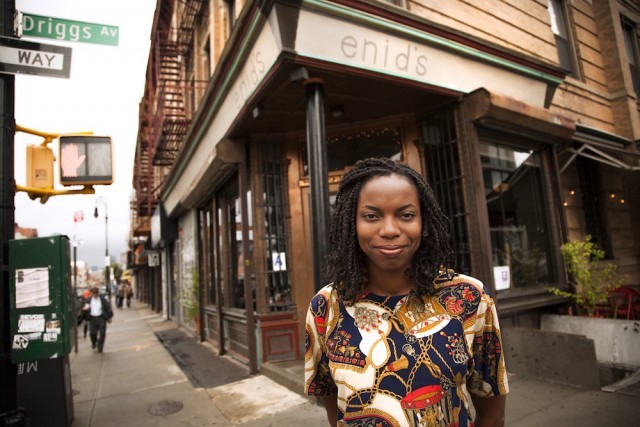 Even though I haven’t lived here in a minute, I like being able to come back and remind myself of the times I’ve had here.

I really like the decor. It’s very do-it-yourself. Just strung-up lights, and during the holidays, they’ll have cutout paper snowflakes and draw on the windows. It’s really cute. Like someone’s house. Someone put personal care into it, and I like that aspect.

I really like when neighborhoods feel like neighborhoods. I talk to people on my street. That’s why I liked Greenpoint so much. The people who sat outside my stoop on my building would talk to me whenever I came in. I don’t know any of their names, but we would talk to each other about whatever. We had a neighborhood president who would organize block parties.

I can tell if a person is cool if their vibe mixes with this place. Or if they’re weirded out by the decorations. It’s an interesting place, and I can be like, “Oh, you don’t get it.” But if somebody falls right into it, then I’m like, “I like you.”

It’s not hipster in a pretentious way, but it is a little hipster here. In a pretty genuine, “we like these things” kind of way. Not like, “we’re trying to make it seem like this place is older than it is” or “we’re trying to make it seem like we have records you’ve never heard of.” They do, but not in a way that’s snotty. I feel like I have that, too. I have particular tastes, but I’m still accessible, I’d like to think.

I’ve had a lot of dates here. I was hooking up with this guy who didn’t live in New York, and he came in town to visit one day. We went to that booth right there and were canoodling. It was so gross. Kissing each other. We weren’t a couple but definitely acting like one. The waiter was like, “Man, you guys are really, like, loving.” He’s a nice guy, but he doesn’t live here. So it was just a fun, every-once-in-a-while fling.

I love brunching. Brunch for me starts at 1 p.m. It’s not really breakfast. 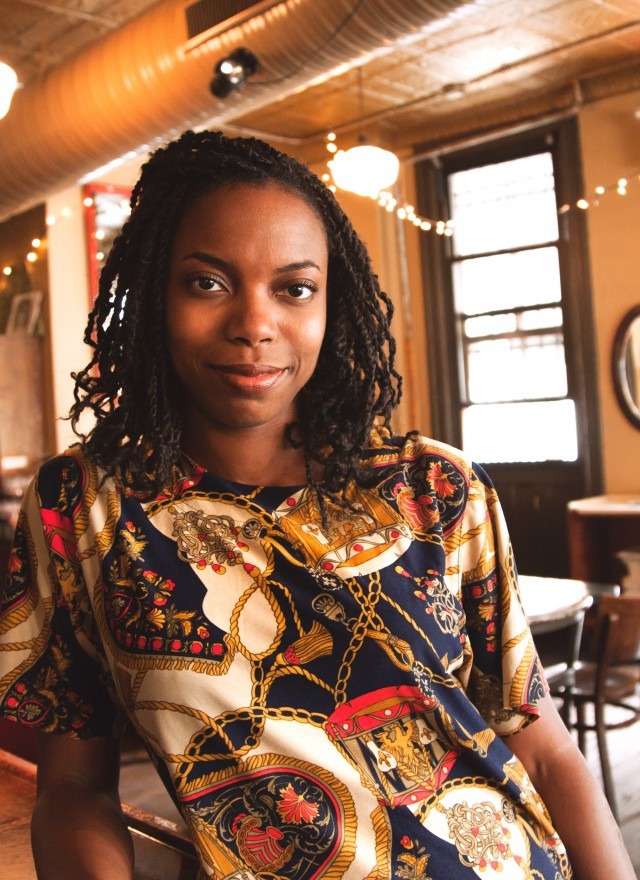 This other guy, we were hooking up for months. It was getting to the point where I didn’t want to do this hookup thing anymore. I didn’t want to not have a label. I was getting tired of the games. We were hanging out for a couple of months, and we had gotten brunch here. We had a really great time. It was after the holidays, so we hadn’t seen each other for a couple of weeks. We were hanging out, loving life, and he walks me back to my apartment. And then, before I get into my apartment, he’s like, “Oh, by the way, I just want to let you know, I don’t want to be in a relationship.” He waited until the whole brunch was over and waited until he walked me home to drop this information. Which, honestly? There’s never a good time to hear that. It’s not like it would’ve been better at the beginning of brunch, but it’s also like, if you already know what you’re going to say, I didn’t need you to spend hours with me in order to do that. Get drinks, something that’s shorter—we had a whole meal! Something in-and-out where I can get out of there as opposed to making me feel like this is a great time. He’s a nice guy. He was doing it in the nicest way possible, but I was like, “Fuck you!”

During the week if it’s during the day, it’s pretty chill and easy to talk to somebody. Also, I’m not at risk of somebody overhearing something I’m saying. I’m always at risk, but I haven’t felt like, “Oh, man. Is there a blogger sitting next to me that’s going to write down some gossip or something?”

I feel like I’m at an interesting time in my life where I’m actually really craving information. I’m checking out the news more, watching documentaries, reading. Just trying to figure out my place in society. I figured this would happen. Years ago, I figured I’d be more political.

After Ferguson and seeing the repetition of police brutality, I know it’s not new. I know it’s been there. We just now have cameras on our phones and can document this stuff. Seeing so many names become hashtags and there aren’t a whole lot of things changing to stop that. Or when people are still doing mass shootings and we still have guns. Things haven’t really been regulated when it comes to gun control. Or people trying to defend Planned Parenthood. There are so many things that keep coming up where I’m like, “I’m just getting really angry now.” Instead of just pounding my fist and yelling at people and writing angry words online, I want to take a step back, analyze what’s been happening and how it’s been happening. I want to take more of an analytical look at stuff and see how it can change.

I don’t feel cute right now, I feel angry. And I want to talk about that onstage. 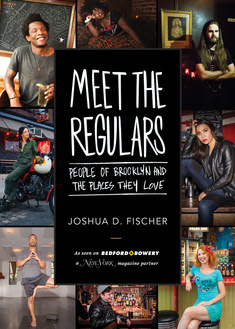 Meet the Regulars introduces us to a diverse and changing Brooklyn through the people who know it best: the blogger who fixes her hair and heart at her cherished salon; the lady so loyal to her local bar she has its logo tattooed on her arm; and the burgeoning filmmaker who walks twenty blocks for sage advice from a legendary bartender at a bowling alley bar.

Joshua D. Fischer received his master’s in journalism from the Cultural Reporting and Criticism program at New York University. He has been published in the New York magazine partner Bedford + Bowery, Nylon, and Salon. Originally from the Detroit area, Joshua has lived in the same apartment in Greenpoint, Brooklyn, for twelve years. He now shares the place with his wife, Suzanne, and their crazy-cute dog, Ernie.

This Sexist Award Show Parody Is Everything We've Been Missing

'You Know, Those Black Girls Who Do Improv'

Funny Lady Gets Flashed Then Makes A Video About It, Obviously