Details
BY BUST Magazine
IN Living
Published: 03 May 2016 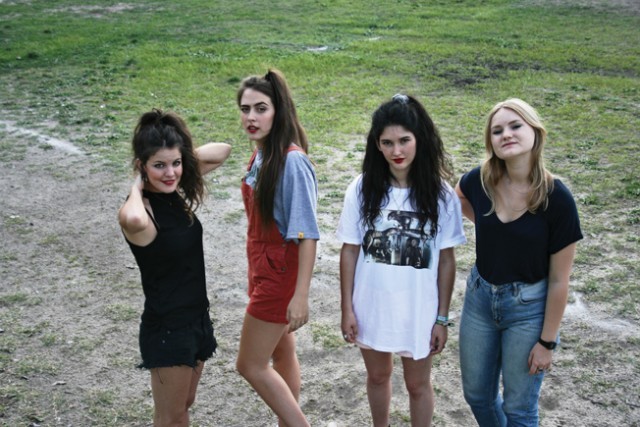 “Madrid is a huge rock ’n’ roll city—it’s so hip, it’s so free, it’s so open minded,” says Carlotta Cosials, singer and guitarist of the garage band Hinds. “It’s cool, but the city itself doesn’t know it, which is even cooler.” In addition to breathtaking architecture and an incredibly rich history, Spain’s capital, smack dab in the middle of the country, is also full of hidden gems, from the most delicious vegetarian restaurant to the best vintage scores to the tiniest all-night club. Hinds gives us the inside scoop for your next European vacation. 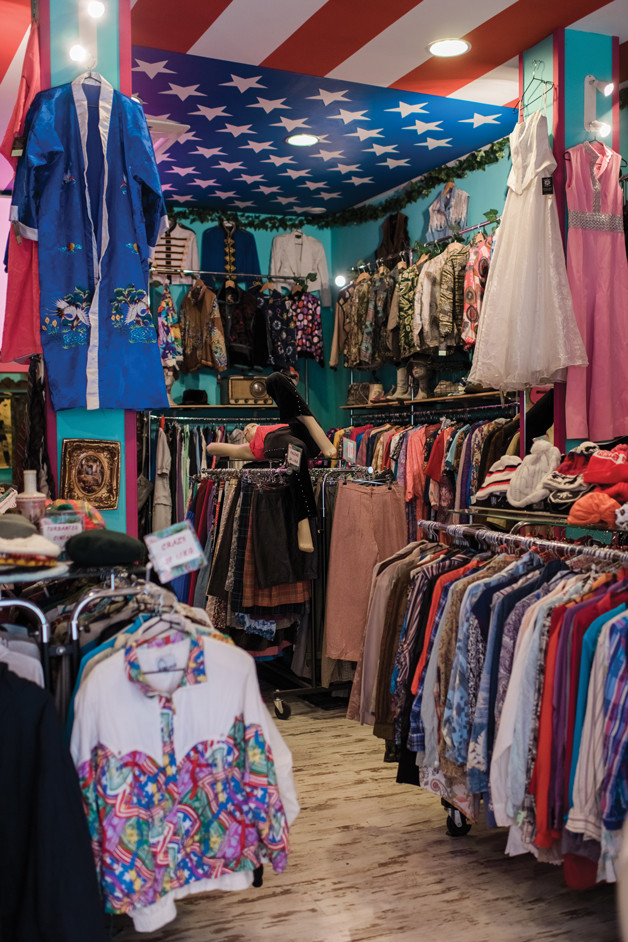 Photo by Heather MobleySHOPPING
Malasaña is the band’s favorite neighborhood for many reasons, not the least of which is its treasure trove of amazing vintage stores. La Mona Checa (Calle Velarde, 2), which literally means The Czech Monkey, has been around the longest, probably because it’s so damn affordable. Be sure to check out their selection of coats. “You always find something there for sure,” Cosials says. Flamingos Vintage Kilo (Calle del Espiritu Santo, 1) is bigger and newer and sells clothes by weight for an even better deal. Stock up on wearable souvenirs from their selection of ’80s and ’90s T-shirts. Non-used ’90s dead stock is the specialty at The The Storage (Velarde, 1) where you can get new vintage in multiple sizes; it’s also where the band gets all their “dungarees” (aka jeans). For a more mainstream shopping experience, walk the Gran Vía, but be sure to look up from the storefronts to take in the street’s impressively ornate buildings. 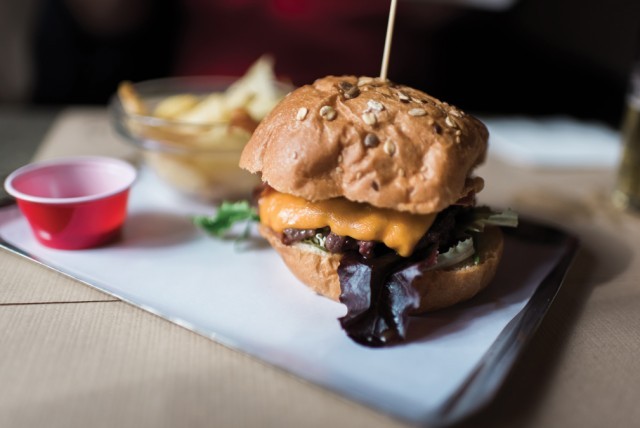 EATING + DRINKING
Brunch isn’t big in Spain. Locals mostly eat breakfast at home, but for a quick nosh in the morning, try Café Pepe Botella (Calle de San Andrés, 12). Its patio overlooks Plaza del Dos de Mayo, one of Malasaña’s busiest squares. Try the pa amb tomàquet, a Catalan dish of seasoned tomatoes and bread, or hot chocolate and churros. For a little coffee shop action, get your café con leche at Naif (Calle de San Joaquín, 16)—it’s not cheap, but it’s in the middle of everything and its terrace offers top-notch people watching. “We love coffee and we love cigarettes,” says Corsials, “so we just sit down there and smoke and drink coffee and talk. A lot.” The city’s best vegetarian dishes are served up at El Restaurante Vegetariano (Calle de Manuela Malasaña, 9) where Corsials’ aunt is the owner and chef. “It’s the perfect balance between elegance and cuteness,” she says, and the lasagna is not to be missed. (“You can cry about how good it is.”) If you’re not in the mood for an entire meal, get your night started at Bar Sidi (Calle de Colón, 15), where beers are served with complimentary tapas. 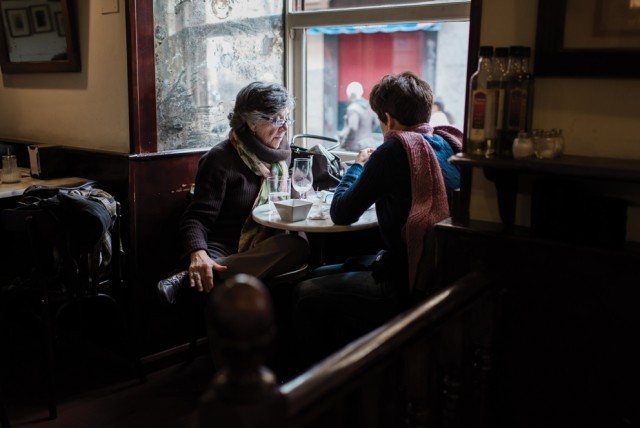 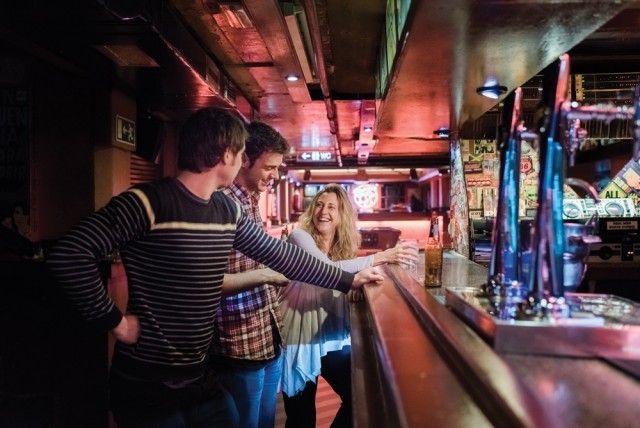 Photo by Heather Mobley GOING OUT
La Vía Láctea(Calle de Velarde, 18) is one of the city’s most legendary hangouts. The interior is covered in posters, they play music on vinyl, there’s a pool table, and drinks are super cheap. The place is so cool, you don’t even need to go inside—Corsials says people just hang out in the street by the entrance, drinking and talking where the loud music doesn’t cancel out conversations. When you’re ready to get your dance on, head to Hinds’ favorite discotheque, Ochoymedio (Calle Barcelo, 11), where rock and indie music, something that’s “not that easy to find in Madrid,” says Corsials, is played until dawn. “They have a more open–minded taste in music and you always, always have fun.” When your feet can dance no more, Wharf 73 (Calle Colón, 12) is where everyone ends their night. The tiny corridor of a club is one of the only other bars that stays open till 6 a.m. “The drinks are very, very cheap and there is always a good vibe inside,” Corsials says. 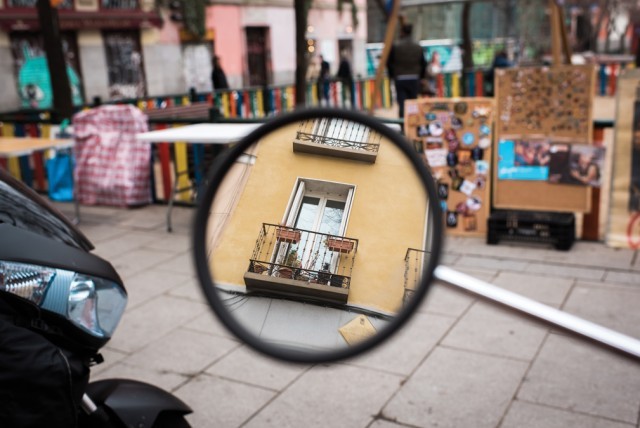 CULTURE
Malasaña is becoming a hot spot for galleries and theater, but one of Corsials’ favorites is Microteatro por Dinero (Calle de Loreto Prado y Enrique Chicote, 9) a tiny theater filled with a handful of different rooms, where you can catch short plays for just a few Euros. “It’s so cool because it’s super cheap and if suddenly you don’t like it, it doesn’t really matter because it’s only 15 minutes,” Corsials says. Grab a beer at the basement bar and get ready for a dynamic performance experience.

Want the perfect soundtrack for maximum fun in Madrid? Hinds’ latest album, Leave Me Alone, has all the travel tunes you need.

Thao & The Get Down Stay Down Collaborate With TUnE-YArDs In Brazen, Fearless Album