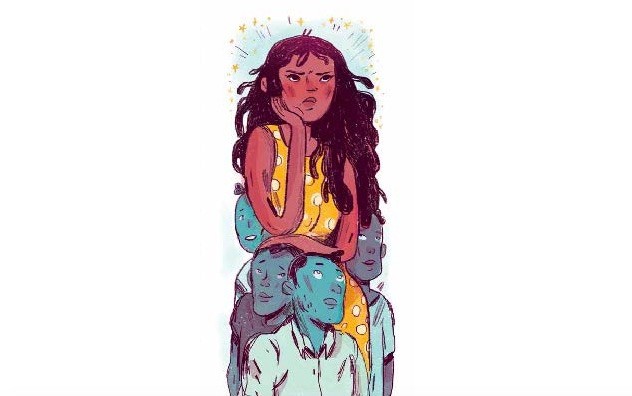 Romance can be tough for anyone—but just imagine what it’d be like if you were taller than the average WNBA player. Here, a vertically gifted woman talks standing out and “dating down”

I used to wish I were an okapi. In addition to resembling adorable hybrid giraffe-zebras, female okapis are typically larger and taller than their male counterparts. So, as a 6’3” woman, living in the okapi world would mean that it’d seem normal when I tower over my male peers. I’d also get to live in an African rainforest, so that would be pretty awesome, too.

Our culture suggests men should always be taller than their female counterparts, and heterosexual pairings are usually depicted with a woman standing on tiptoes to kiss her man. (Some of my average-sized friends have been known to eschew heels for photo ops, just so their male partners would tower over them even more than they already do.) That’s easy when the average American female is 5’4”, well below the standard male height of 5’9”. In fact, according to U.S. Census records, less than 0.5 percent of women are six feet and higher. A tall woman wishing to find a man who eclipses her in height should either move to the Netherlands (where average male heights are in the 6’ range), or become a member of the Dinka, a tribe in South Sudan thought to be the tallest in Africa. Statistics are so not on our side.

Interestingly, I’ve seen similar height dynamics playing out in queer relationships along the femme-butch spectrum. And I’ve had shorter guys confide to me that it’s not only tall women who have it tough in the dating pool. In a 2014 study by Rice University and the University of North Texas, 55 percent of women surveyed said they’d only date a man taller than they were, compared to 37 percent of men who said that they’d only partner with shorter women.

Of course, some very tall women have pretty normal dating lives. I was not one of them. Picture me at school dances, an oak among seedlings, well out of earshot of the important conversations occurring at the 5’3” level. In high school, I spent my time writing anonymous love letters to jocks who hooked up with girls half their size. The men interested in me during my college years were often 45, or saw me as a potential dominatrix—yes, dating as a tall woman also invites the potential for being fetishized. I’ve had several awkward run-ins with men who were fixated on my Amazonian proportions, and online dating made this even more obvious. “Looking for a tall, powerful black woman for relationship” was a request I received four times from one potential Match.com suitor, who clearly wanted me to participate in his noir Xena fantasies.

Gracey Pankey, a six-foot-tall lifestyle and fashion blogger at the appropriately named site Fashion for Giants, has a clear preference. “I’ve dated men both six inches taller and six inches shorter than me. My relationships with the shorter men were definitely more difficult,” she says. “I didn’t feel safe or protected. I was also unable to stop making jokes about the height difference, like offering to lift them up to see things.” That may sound superficial, but the top two reasons women cited wanting a taller male partner in the aforementioned study were “protection” and because it made them feel more feminine. And though I wish I could totally distance myself from this type of sexist and stereotypical thinking, I used to want the same things.

The men interested in me during my college years were often 45, or saw me as a potential dominatrix—yes, dating as a tall woman also invites the potential for being fetishized.

There was a time when the only guys I let myself crush over were as tall or taller than I was. Yeah, it was important that they be super smart and hilarious, but it was much more important that they were LeBron-sized. I pictured us meeting in a quiet library, aimlessly strolling opposite aisles. Our hands would overlap on the topmost shelf reaching for the same novel, and mad, passionate, tall love would ensue. Due to both my size and interests (military background, basketball player, self-defense classes) I never thought I needed men for physical protection. I did, however, have strict ideas about what it meant to be feminine. As a tall, black woman, my femininity has been constantly questioned; I’ve been asked point-blank what my gender was by complete strangers. And it was hard to ignore that when tall women like Julia Child or Janet Reno were impersonated by comedians, they were always played by men. Coupling with a taller guy seemed the perfect way to increase my feminine caché.

“I completely understand the desire to feel small, because this is what I was taught to want,” says Virgie Tovar, MA, a body-positivity activist and sexuality educator. “[Having a larger male partner] becomes something that we can use to validate our gender.” The idea that the right man will augment our femininity is an idea that many women share. But as I questioned my reluctance to date down, I saw it was intensely out of step with my beliefs—I was the kind of person who questioned gender roles, but I still believed in the taller-man paradigm. I also found out that men being taller than their lady partners is neither a universal, nor a natural phenomenon. Taller women in the Mundari tribe of Sudan command steeper dowry prices than their shorter counterparts. And one British study found that if straight couples were randomly partnered, taller-woman pairings would actually occur much more frequently than they do—7.8 percent versus the actual occurrence of 3.8 percent.

I learned that my body deserves care and acceptance, no matter how unconventional my height may be

It took me a long time to get comfortable with my body and evolve my own ideas about being feminine. It began after graduating military school, when I felt an almost supernatural pull towards all things self-love and feminist. As I read books about how society perpetuates damaging norms for women, I also started working with a holistic health coach. I learned that my body deserves care and acceptance, no matter how unconventional my height may be. Sure, it would have been much easier to “date up” than engage in this emotional body-image work, but all this self-reflection has actually been rewarding. It finally led me to the realization that it’s much more important for me to be with some-one who shares my values than my inseam; I’ve been with my current boyfriend, who’s about four inches shorter than me, for three years. He has never begged me to wear flats or made Kidman-Cruise jokes, and he likes that he can easily find me in a crowd. And while I rarely see couples that look like us, there haven’t been any public upheavals over our height difference. (Though this could also be because I live in N.Y.C., the city whose motto could easily be changed to “No One Cares About You.”)

The tall-man/short-lady paradigm isn’t one that’s going to disappear anytime soon, but I do hope more people—vertically gifted, petite, and in-between—reconsider their height hang-ups. If you’re a tall lady who’s on the fence about whether to date down, try looking inward, question your culturally fuelled preferences, and give it a go. Who knows? You may find your own okapi, just like I did.