Details
BY BUST Magazine
IN Living
Published: 13 May 2016 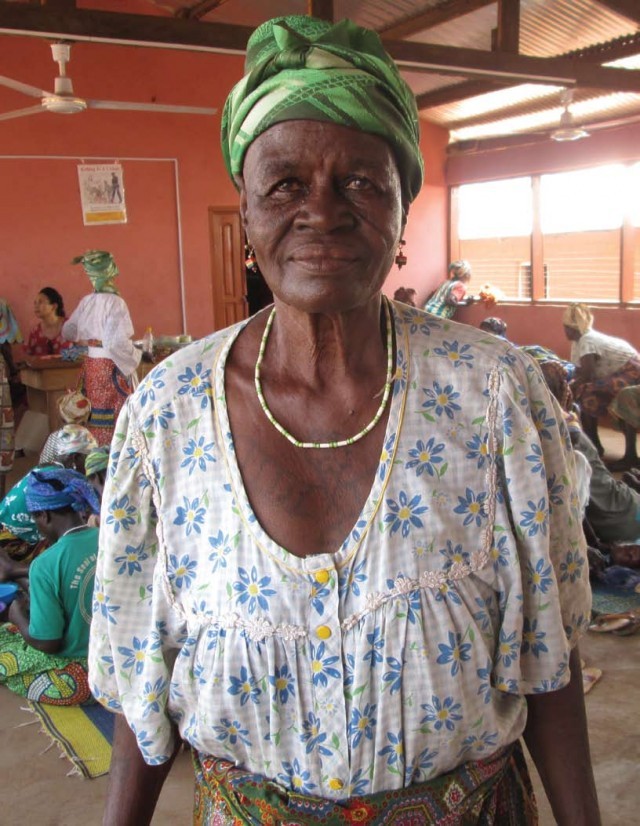 Mutaru Tachira was cast out of her village in Ghana 21 years ago over accusations of witchcraft. She’s been living in a “witch camp” ever since. This is her story. 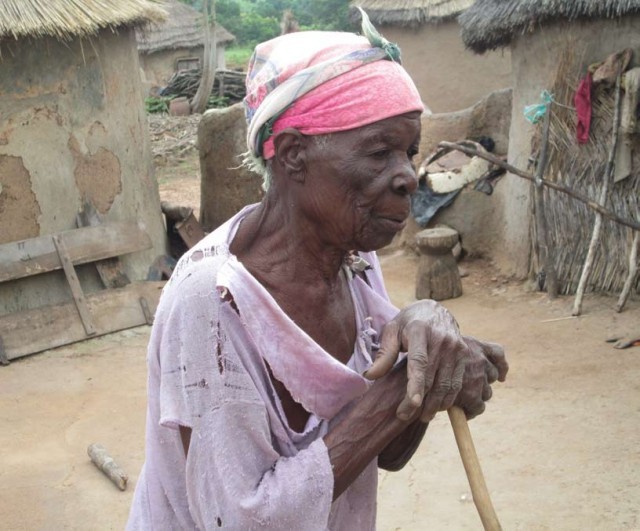 Mutaru Tachira
A dark, shameful blot on the pages of American history, the witch hunts of Salem, MA, in the 1690s represent an era we’re all glad is far behind us. But in some areas of Africa, the same sorts of accusations that plagued the colonists of Salem still hang heavy over the heads of women every day. This is especially true in Ghana’s Northern Region, where it is not uncommon for powerful Voodoo priests to lead crusades against alleged witches whom they believe are using secret spells, rituals, and curses to unfairly help themselves and harm others. In fact, women in Ghana are accused of using the dark arts so often, and are so routinely banished from their homes as a result, that seven different “witch camps” now dot the region, providing makeshift homes for thousands of refugees and their children.

One such woman, 66-year-old Mutaru Tachira, has spent the last 21 years of her life at a refugee settlement known as the Gambaga Witches’ Camp, 59 miles from her home village of Wapuli, after being tormented for over a decade by her relatives and neighbors due to accusations of witchcraft. The camp is densely populated by women who’ve similarly been accused of using “black magic,” perhaps because they were successful farmers, were good in school, had profitable businesses, or dared to interfere with matters reserved only for men. Sometimes, even inevitable occurrences like deaths or illnesses in a village are enough to land a woman in exile. Widows left with land but without a man to protect their interests are particularly common targets. So are the mentally ill, or any other females deemed difficult or undesirable by their villages. “To get me out of their community, [my husband’s family] accused me of using witchcraft,” says Tachira. “I am a freeloader now, marginalized and abused.” 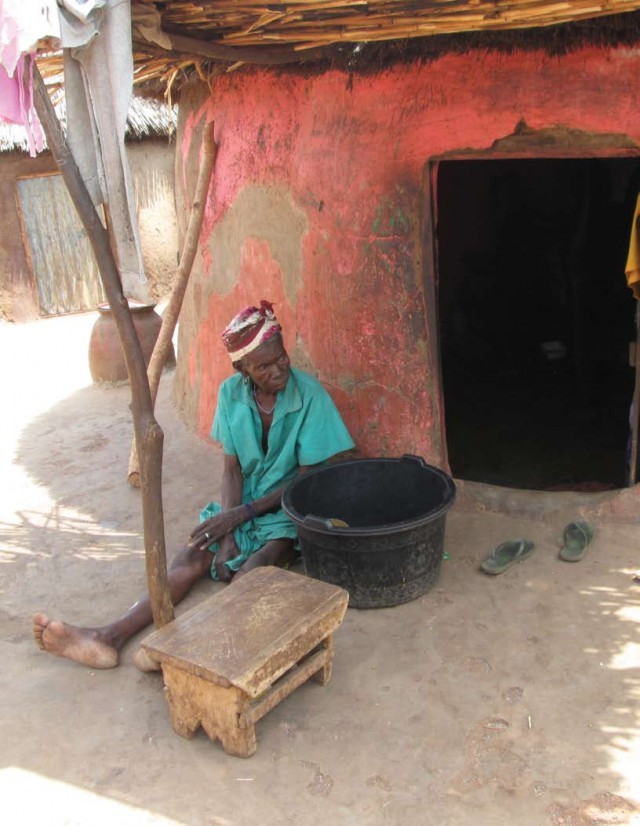 A resident outside her hut at Gambaga Witches' CampTachira’s banishment didn’t happen all at once. It was a long, slow, painful process. Perhaps if Tachira hadn’t ever married into her late husband Mahamadu Mutaru’s family, she would still be at home today. But when it comes to marriage, few women in her region have any say in the matter at all. Girls born into Tachira’s Konkomba tribe are not educated. They’re kept at home, doing all the household chores until their parents effectively sell them into servitude to another family through arranged marriage. Most remain illiterate, vulnerable, and dependent for the rest of their lives. “My marriage was [decided] without my consent before I was 10 years old and I was married at 15,” says Tachira, wiping tears away with a dirty cloth. “It still haunts me when I talk about it.”

When she was 30, Tachira’s much older husband passed away. “His stomach had swollen like he had swallowed something,” she recalls. “While he was on his sick bed, I took care of him alone.” After her husband’s death, his younger brother, a man Tachira says had always praised her for her “hard work, submissiveness, and respect,” expressed an interest in marrying her. When she not only turned him down, but also disagreed with him over a parcel of farmland she says her husband had left to her, the rumors began. “Unexpectedly, witchcraft accusations against me spread after the death of my husband,” she says. “My brother-in-law accused me of being responsible for my husband’s death because I turned down his love.”

Not long after she was first accused, another allegation was launched at Tachira from a local Voodoo priest. He blamed her for the deaths of four young boys who had died from various ailments within the past year. One had died from a snakebite, while the other three had succumbed to disease. Right away, these new allegations, paired with existing suspicions over the deaths of her husband and a son who died after a difficult labor when Tachira was 16, complicated her situation. “He blamed [bad] omens in the community on me,” she says of the priest. “I was so surprised. I fought all alone against the most powerful people in the community and I could not win.”

As time went on, the priest claimed the gods had revealed to are already fed unsatisfactorily.” him that Tachira was responsible for more strange deaths and calamities. By the time she was 31, she was made to answer for her supposed crimes. “I was summoned to the chief’s palace over these charges especially in the Dagomba, Konkomba, and Mamprugu tribes,” she says. “None of my denials would make them change their perception of me. I was eventually obligated to go through rituals meant to test my innocence. In the process, I was stripped naked, shaved, and walked through the market center for three days. Then I was confined. The majority of these rituals were performed at night. I was subjected to beating, molestation, and threats. Bitter concoctions were forced down my throat, and in some instances I was starved, in hopes that I would admit to being responsible for what I was being accused of.”

Tachira lost count of the number of rituals she went through during this supposed cleansing period, many of which she was compelled to pay for herself, draining the last of her personal savings. Finally, at age 45, after 14 years of harassment by her community and virtual imprisonment in her home, Tachira decided to free herself from these ritual nightmares the only way she knew how. She confessed to being a witch and admitted to using witchcraft to commit many crimes, including killing her husband. “I was tired of this torment and needed to say something to gain my freedom,” she says. “The only way was to accept responsibility and confess, so I did.” In the aftermath of her admission, “I walked through the bushes to the Gambaga Witches’ Camp to seek refuge,” she says. It took her days of trekking on foot to make the 59-mile journey.

Residents gather at Gambaga
Gambaga is one of the oldest and most famous witch camps on the continent. Established over 200 years ago by Islamic missionary Imam Baba as a refuge for women banished over witchcraft allegations, the camp is comprised of about 25 round huts roofed with thatch and plastered with a mixture of mud and cow dung. The structures are unventilated except for their small doors, and the settlement as a whole, which usually houses a fluctuating population of around 100 women at a time, offers no electricity, indoor plumbing, or health services. The condemned women and children who live there are provided with meager food rations and job training in skills like beading and soap-making by various international aid organizations. But according to Kenneth Addae, National Coordinator of the Anti-Witch.craft Campaign Coalition-Ghana (AWACC-Ghana), “Funding to Ghana has diminished since it established a middle class. This has affected food distribution to outcast homes, where residents are already fed unsatisfactorily."

"Reintegrated women keep coming back to the camps becasue they continue to be abused and molested in their communities."

The number of outcasts seeking refuge continues to grow, because belief in witchcraft exists in almost every tribe in Ghana, especially in the Dagomba, Konkomba, and Mamprugu tribes. With the exception of the Gnani Witches' Camp, where a few older men reside (at last count, there were fewer than 10), the rest of the camps are all populated by outcast women and their children. And though the exact number of residents is difficult to determine, between the years 2000 and 2013, the seven witch camps combined have taken in approximately 28,053 women and 12,225 children, according to the AWACC. During that same period, 2,462 women, like Tachira, ended up at Gambaga. “Stigmatization, molestation, marginalization, abuse, and fear of physical threats are [the factors that] drive women accused of witchcraft to outcast homes,” says Addae. “These are women who do not have strong family support.”

But banishment is not necessarily a life sentence. The village of Gambaga’s chief, the Gambarana, is said to be descended from a long line of men and women born with the ability to determine whether a woman is guilty or innocent of witchcraft, and he evaluates every refugee upon her arrival at the camp as well as farther along into her stay. Because the Gambarana’s connection to the spirit world is considered exceptionally strong, his word on the guilt or innocence of a suspected witch trumps that of most village priests, and a verdict of innocent can be a woman’s ticket home. Unfortunately, the ways in which he makes these determinations are less than scientific. For example, in many cases, a suspected witch will bring a bird to the Gambarana to have its throat slit, and once the wound has been inflicted, the chief will watch to see how it dies. If the bird falls forward in death, it means that the accusations against the woman are true, and this outcome usually results in her abandonment at Gambaga. But if the chicken falls on its back, the woman in question is cleared of being a witch, and can sometimes be successfully reintegrated back into her community.

"My brother-in-law accused me of being responsible for my husband's death because I turned down his love."

Reintegration is also the strategy currently being championed by the Presbyterian Church’s Gambaga Outcast Home Project as well as by Ghana’s Minister for Gender, Children, and Social Protection, Nana Oye Lithur, who has indicated that the government of Ghana plans to close down all the outcast homes in Northern Region. Instead of allowing the victims of witchcraft accusation to be warehoused in refugee camps, the minister says, it would instead be preferable for the government to provide outcasts with the social and financial support they need to survive on their own until they can reintegrate or find other permanent homes. To date, no outcast homes have been closed, despite mounting pressure from the UN to provide a better alternative. However, while reintegration seems to be a viable option for some refugees, it is often just a temporary solution to a persistent problem. “Reintegrated women keep coming back to the camps because they continue to be abused and molested in their communities,” says Addae. “But we are winning the war gradually. A recent court case [in which the AWACC provided legal support] ruled in favor of a family banished from their home due to witchcraft allegations. The court compelled their chief to reinstate the family.”

This kind of progress, now happening at the grassroots level where the UN has so far been ineffective, is provid.ing hope for many that the witch-hunts will one day come to an end. But for Tachira, these attempts are too little, too late. Though declared free of witchcraft at Gambaga, she says she prefers to stay in the camp where she knows she’ll never be abused, marginalized, or threatened again, rather than try to make a new life for herself in the outside world. She says at Gambaga, she’s found peace and love—something she never experienced at home. “What I passed through,” she says, getting up slowly with the aid of a walking stick, “it was more than hell.”

The History Of Birth Control Is Pretty Backwards

Tags: Ghana , witch camps , witches , from the magazine , from the archives