Riot Don't Diet: Metrecal Was Gross, And Now It's Gone 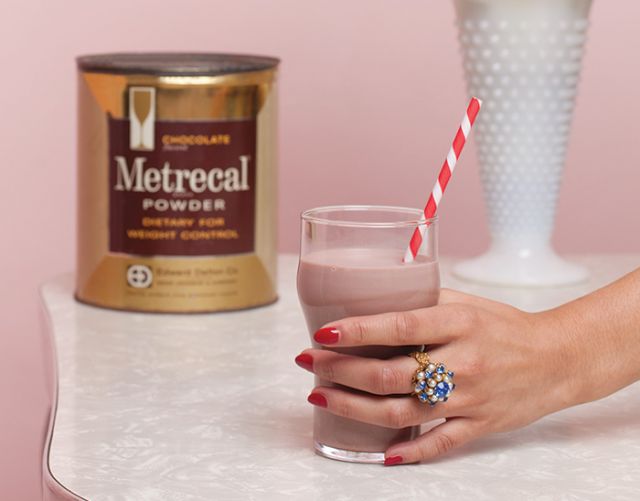 One of the symptoms of  “the problem that has no name,” outlined by Betty Friedan in the first chapter of her 1963 classic, The Feminine Mystique, was that American women “ate a chalk called Metrecal, instead of food, to shrink to the size of thin young models.” Metrecal wasn’t the first diet meal replacement food, but its introduction in 1959 was at the precise moment when the corseted tiny waists of fashion’s New Look began to give way to a naturally waiflike figure, later epitomized by Twiggy. Women gave up their girdles, and started dieting in earnest. Sure, Metrecal was for men, too, but virtually all the ads featured women. “When one glance tells you the new slim fashions aren’t for you,” was the ominous beginning of a 1963 Metrecal ad that featured fashions by hip designer Emilio Pucci. Editorial content also made the association between women and Metrecal. A 1961 Life magazine article about weight loss included a photo of socialites sipping Metrecal at a “swank” restaurant, while another showed women crowded around a drugstore lunch counter where individual cans were kept for regular customers.

Even so, Metrecal was wildly popular. A year after its introduction, The Kiplinger financial journal reported 1961 sales in the range of $30 million. Meanwhile, the counterculture indicted Metrecal, tranquilizers, and martinis as a decadent triumvirate of suburban self-medication. Academic Jeanne Noble picked up on the racial ironies of the product in 1968, writing: “While America is on a diet, having gluttoned itself into the land of Metrecal…thousands of black children starve in Mississippi.”

Sales eventually slowed as consumers turned to newer products that built on Metrecal’s success, notably an up-and-comer called Slim-Fast. And by 1977, it had all but disappeared from the market.

Orthorexia And Social Media: What You Need To Know About The 'Clean' Eating Disorder

Couple Catches Barbie Flu And Won't Stop Until They're All Plastic

Tags: Metrecal , diet , weight loss supplement , SlimFast , riot don't diet
Support Feminist Media!
During these troubling political times, independent feminist media is more vital than ever. If our bold, uncensored reporting on women’s issues is important to you, please consider making a donation of $5, $25, $50, or whatever you can afford, to protect and sustain BUST.com.
Thanks so much—we can’t spell BUST without U.