Dear Kristen Stewart: You Are Exactly My Brand of Antiheroine 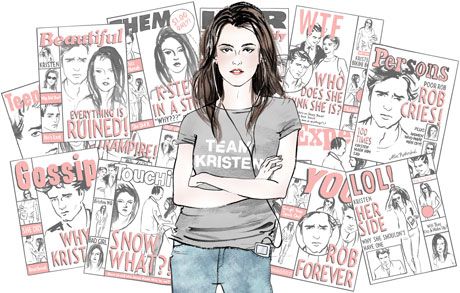 I’m sure you won’t mind that I’m not reciting this letter out loud to you on YouTube, the way a 14-year-old Twilight fan would. People are so full of feelings about you lately, Kristen Stewart—about your affair, your breakup, your public apology, your reconciliation. I have feelings about you too, but I’ll do my best not to make this weird.

I’m sorry that I didn’t have the best impression of you at first, when I caught New Moon on a plane. The movie was too boring to keep me awake in my jetlagged state, and yet I couldn’t fully fall asleep either, so it was a hellish cycle of watching and dozing while your performance as the mopey, lobotomized Bella played over and over for 10 hours.

Later, though, I realized that you’re really a better actress than that. You came of age onscreen not with cutesy-kid appearances but with movies like Panic Room with Jodie Foster. From a rape survivor in Speak to young Joan Jett in The Runaways, your body of work is impressive enough that, if future generations want to know what being a teenage girl was like at the turn of the millennium, they could just watch your back catalog. Though they might find it ironic that for your most famous role, in the Twilight saga, you had to play such a dud. Then again, if history remembers what a slut-shaming, looks-dissecting, reality-show-trainwreck-clusterfuck our popular culture has been, it’ll be no surprise that so many young women settled for a protagonist like Bella Swan. If nothing else, she was a blank slate they could project their fantasies onto.

Or, really, onto you, Kristen. Because somehow, Bella managed to turn you into her, and you became not just a blank slate but also a virtual punching bag when you didn’t act the way fans wanted. You should have smiled more at the Teen Choice Awards, and looked more in love with Edward. I mean, Robert! Whatever!

It was hardly a surprise that the backlash was so fierce when photographers caught you in a clinch with married director Rupert Sanders. After all, being 22 and getting caught cheating is fine if you’re on Jersey Shore, but we have different standards for women who have a multimillion-dollar franchise and a celebrity love story to uphold, young lady! So you publicly apologized, presumably for ruining our collective fantasy of your life with RPatz as much as the real relationship. But by then, the damage was done—the breakup happened, the “Kristen is a Trampire” T-shirts were printed, and it was announced that you weren’t part of the plans for a follow-up to Snow White and the Huntsman.

So where does this leave you now? You’ve failed at being the passive heroine Twilight fans want, and the “kick-ass” heroine that an action franchise like Snow White and the Huntsman requires. But fuck it, who needs them? What’s the point of donning armor for your “fierce female role” when you’re a walking target in real life? Why play Snow White in a world in which fairy tales aren’t just projected onto the screen, but are repeated by politicians who want laws that reflect their creepy beliefs about magical pregnancy prevention during rape? Never mind, let the folks who want “strong female characters” have Katniss Everdeen, safely ensconced in her fabulous dystopia.

Instead, you are in the here and now, navigating the perils of a dysfunctional culture torn between empowering ideas about women and ridiculously retrograde ones. It’ll be rough for a while, but I think you’re going to make it, even if right now you’re being crushed under the weight of fame. Here in the real world, Kristen Stewart, we don’t need you to be the girl who was on fire; we just need you to keep your cool. Don’t let anyone tell you to smile more, and don’t ever apologize.

This review appears in the Dec/Jan 2013 issue of BUST Magazine with Mary Elizabeth Winstead. Subscribe now.