Comedian Mike Birbiglia Confronts His Nightmares in Sleepwalk With Me 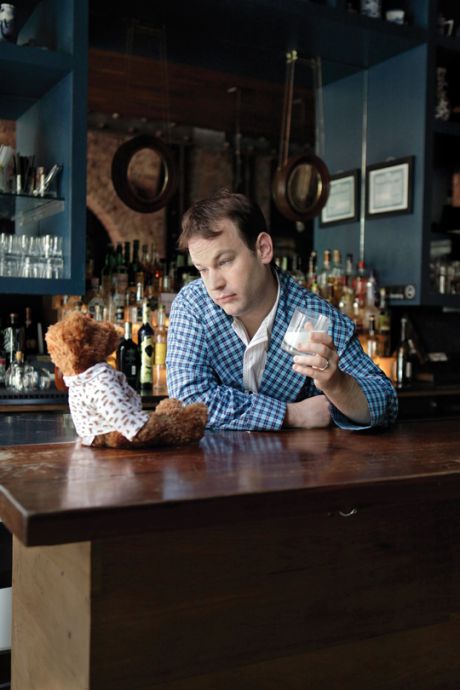 Mike Birbiglia has released three comedy albums, starred in three Comedy Central specials, is a regular contributor to This American Life, and both wrote and starred in two award-winning off-Broadway one-man shows. But even he struggles with staying professional from time to time. During filming for Sleepwalk With Me—the new movie he co-wrote, directed, and stars in based on his sleep disorders and love life—he had to make it through an unexpectedly difficult scene. No, it wasn’t an emotional moment between he and his fiancée (played by the delightful Lauren Ambrose) or his on-screen mom (played oddly and wonderfully by Carol Kane). It was a scene in which his filmic alter ego dreams he’s eating a travel neck pillow made entirely of pizza. “Our prop master built three pizza pillows, so we had three takes,” he explains. “The first take, me and everyone on the crew laughed through the entire thing. It was completely ruined. I said to Jesse Klein, the actress who was my scene partner, ‘I don’t know how not to laugh. Tell me something to think about.’ She said, ‘Think about world poverty,’ and it worked! So if you watch that scene, I’m eating a pizza pillow, thinking about world poverty.”

Eating a pizza pillow is nowhere near the strangest thing Birbiglia had to do for Sleepwalk With Me. The film is loosely based on his real-life experiences with rapid eye movement behavior disorder, a lengthy name for a terrifying condition that caused him to sleepwalk and occasionally act out his nightmares. The problem came to a head in 2004, when he was a touring stand-up comedian. In the midst of a particularly vivid dream in which he was the target of a guided missile, Birbiglia jumped out the second-story window of a Washington State La Quinta Inn and was running around its lawn, bloody, in his underwear. After a hospital stay, he was prescribed powerful sleep medication, and now sleeps in what’s essentially a giant sleeping bag and mittens. After writing a one-man show and New York Times bestselling book about his experiences, he collaborated with This American Life’s Ira Glass on the film version, a warm, hilarious, and riveting adaptation.

Asked about his biggest challenges during the adaptation process, he laughs. “The challenges I’ve surmounted in the last three years have been gargantuan,” he says. “I was a screenwriting major in college; I wrote two feature-length screenplays and two three-act plays. But they were never produced, because it became clear how expensive it was to make films. I was spending all my money trying to make these short films and I realized, ‘This is the opposite of a job. They’re supposed to pay you at a job—you don’t pay them. I can’t do this.’ Past age 30, you say, ‘I’m not gonna spend a million dollars making a movie. That’s gonna put me in the hole for the rest of my life.’ But I had to shoot past that and be like, ‘No, no, I believe in this. I’m gonna do it.’”

Birbiglia, who lives in N.Y.C. with his wife, turned 34 in June, and I tell him I recently read a study saying 33 was ranked “The Happiest Age.” So how did 33 play out for him? “It’s been a very productive year,” he says. “You’ve been through your 20s and you’ve made a lot of Lena-Dunham-in-Girls mistakes. At 33, you know just enough to make something good and not enough to try to make it too perfect. I think sometimes people mess up in their 40s and 50s because they’re like, ‘I got it! I figured it out!’ When you think you’ve figured out the Rubik’s Cube, you’re done.”

And check out the trailer for "Sleepwalk With Me," below: