With the passage of the national health-care bill, the abortion debate is back in a big way. Apparently assurances that no federal money would fund the procedure were not enough. As of today, lawmakers in at least six 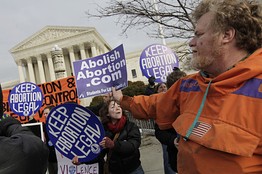 states are pushing legislation to block abortion coverage in some health plans. Even if you hate abortion, does it not rankle that there is no equivalent selective targeting for men? Viagra is covered, even for sex offenders. Under this punitive system, women are being forced to pay too hefty a price.

So get involved. Currently, the biggest crises are in Kansas, Missouri, Nevada, Arizona, Tennessee, Oklahoma and Indiana. Not that anyone is sitting pretty.

For instance, state law in New York pre-dates Roe v. Wade. A Reproductive Health Care Act has been written to uphold a woman's right to make her own, lawful health-care decisions. (Click here to sign the New York ballot. Or, check here to see what you can do.)