Review: The Princess and The Frog 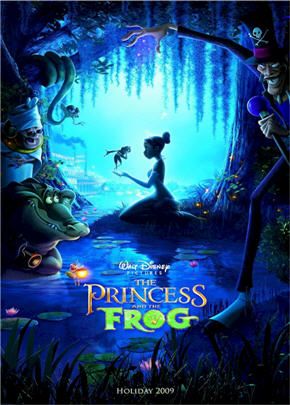 My curiosity was piqued by The Princess and the Frog when I began seeing trailers for this old-school animated film that features the first ever black princess in Disney's history. As I wrote at Cinematical, the trailer made me "uncomfortable" for a several reasons that were also pointed out by other movie writers.

"There have been a lot of switcheroos behind the scenes to make Princess more PC, but the rumble in my tummy says that the (mostly white) critics will be picking it apart scene by scene. So far just the trailers are getting people talking. I agree with /Film's Brendon Connelly that the character of the firefly, who seems to be obsessed with his big, glowing butt, is one of the more troublesome characters. Movieline is concerned about Mama Odie the witch doctor, while Katey Rich over at Cinemablend 'is tempted to give it a pass.' And Jezebel has quite a few discussions about the movie, like why it took so long for Disney to make a black princess, why she spends most of the movie as a frog, and many other dialogue-generating questions."

I admit I watched The Princess and the Frog with one eye on its politics as much as the overall quality of the movie itself. Why? Because I think it's important for young girls to have awesome and inspiring movies to watch. Because I think it's important for grown-ups to enjoy them too. Because the House of the Mouse was trying to get with the times at the same time it was showing off gorgeous, hand-drawn 2D animation that is a dying art in this world of disastrous post-production 3D tentpoles. (Yes, Clash of the Titans, I am looking at you. Blurrily.) And because its lead character Tiana was originally a maid named Maddy.

I gathered some equally film-loving but admittedly skeptical friends together for a small DVD screening one Sunday afternoon. The DVD comes as a DVD/Blu-ray/Digital Copy combo with extras like deleted scenes, games, and so on; I don't have a Blu-ray player, but the DVD itself looked fine. But we found ourselves, well, nodding off. If even we, thirty-something adults who watch subtitled movies that are sometimes over two hours on a regular basis, cannot stay engaged with this film, I have no idea how small children can. The Princess and the Frog is indeed gorgeous, especially one stylized '20s-style dance number, but even the prettiest eye candy can't make up for a sagging script, a poorly placed plot that consists of a lot of watching two frogs bicker and wander around in a swamp, and songs straight out of the Family Guy's Randy Newman episode. Tiana's best friend, Charlotte, is an amusing piss-take on the typical, floofy Disney wanna-be princess — she has a rich daddy, lots of big fancy dresses, and is just tickled pink to finally meet the visiting Prince Naveen. Tiana is interested in realizing her father's dream of opening a restaurant; she works two jobs so she can save up, even though everyone tells her she should go out and have fun and, oh yeah, find a man. And Prince Naveen? Well, he's kind of a douchebag. And when Tiana kisses a little frog on a whim, she turns into a frog too, except lo and behold, the other frog is Naveen, still douchey even in amphibian form. But on the surface, maybe this could be Disney 2.0....

Or not. Tiana and Naveen's sidekicks are stock characters — the hilarious fat friend, in this case an alligator named Louis (like Armstrong) who plays the trumpet, and Ray, a hillbilly-sounding firefly who's missing teeth. They also encounter real human hillbillies missing teeth who want to eat them, just in case you didn't get the joke. Tiana's "fairy godmother" is a toothless voodoo queen who is the only one who can help them remove the curse that's turned them both into frogs — a curse put on them by a voodoo doctor dressed like a pimp by the name of Dr. Facilier. Tiana herself is pretty cool, until she gets suckered into believing that you can turn a frog into a prince by teaching him how to cook. It's also completely illogical that Charlotte and Tiana are both viable candidates for Naveen's attention.

If you think I'm being a knee-jerk liberal arts middle class white chick, well, that's your prerogative. Instead, you can go over to Racialicious and read about what it meant to guest contributor and woman of color Shannon Prince that Disney was finally going to give little girls their first black princess: "Despite the fact that I was a sophomore in college and my sister was a senior in upper school, we all but swooned." Needless to say, they were also disappointed.