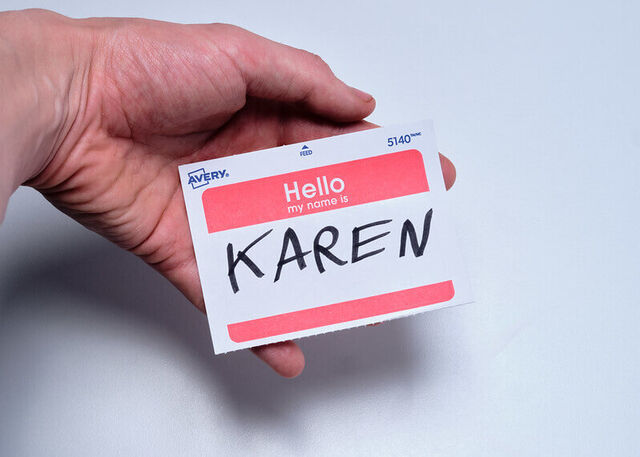 There’s a new Halloween character in town, and yes, she would like to speak to the manager. Spirit Halloween’s recently released “Karen” wig is a bobbed blonde updo reminiscent of helicopter moms everywhere. As shown on its packaging, the perfect Karen “look” can be completed with oversized sunglasses and a “Where the f*ck is our waiter?” stare.

and the scariest costume goes to… pic.twitter.com/AgCXEeE7SX

For the truly dedicated dresser-uppers, Spirit even offers a handy dandy Karen T-shirt for separate purchase, as well as Karen buttons with messages like “OK Karen” and “Not Today Karen.”

These costume items pay homage to the Karen meme that has exploded in recent years, with millennials and Gen Z-ers using the name to denote the kind of middle-class white women who thrive off racist microaggressions. If you’ve ever seen a white mom steer her kid away as a Black man walks past, then you probably know the type.

The wig and its packaging seem harmless enough. The online product description even jokes that it’s “the perfect hairstyle to show everyone you ain’t the one to mess with.” However, as the costume has garnered attention on social media, the wider implications of its message have received backlash.

While it’s not new to turn memes into Halloween showstoppers, other memes rarely possess the same political and social gravitas that underscore the Karen phenomenon. Karen – the ubiquitous nosy, privileged woman – may be an overblown stereotype, but there is real racial harm tied to what she represents.

Take last year’s widely publicized story of Amy Cooper, the Central Park dog walker who called 911 on a Black birdwatcher for asking her to leash her dog, or Lisa Alexander, the white woman who called the police on her Filipino neighbor for writing “BLACK LIVES MATTER” on his own property. As their despicable actions made headlines, both women were branded Karens on social media and immortalized in memes galore.

Cooper and Alexander are not just random, entitled white women, but rather, representations of a culture where white women can weaponize their racial privilege and target historically marginalized people around them. Should such seriously problematic behavior really be trivialized and played for laughs in a cheap Halloween costume?

Many who discovered the costume on Twitter found it frustrating and disappointing but ultimately unsurprising: a reminder that, to white people, racism is something that’s either mined for humor or swept under the rug.

The way yt people have managed to turn this into a joke is honestly so unsurprising. A whole costume for a label that's supposed to identify yt women who weaponize their whiteness to brutalize black people.

I don't see shit funny bout that, that's the face of either someone that's gonna get you fired from your job or cause you bodily harm when she crashes her car into you. I mean yeah it's definitely scary but I don't think it's a bigger threat to the US than domesticated terrorists https://t.co/KmouDb6DPd

Let’s also not forget that Spirit Halloween is a business. By producing and marketing their Karen wigs, shirts, and buttons, they’re profiting quite handsomely from very real racial tension. For just $19.99 a wig, white people can support the Spirit enterprise and subtly mock the severity of their own racism. Yay!

black people called white women karens for using the police to arrest us or to kill us by using police when they cant get their way and white people are profiting off of it .... https://t.co/luku5oc2M1

White people will profit off of everything we do, period. Our trauma, our culture, AAVE, everything. https://t.co/fr4PVcA22n

More than anything, the criticism of these Karen costumes suggests that the name should’ve never become such a widespread joke in the first place. Turning everyday racism into memes doesn’t make it go away; it simply makes racism feel even less consequential to those perpetuating it. Everyone can agree that it’s fun to have a catch-all name for ridiculous white women, but what happens when meme-ability supersedes the issues at stake?

So, let’s not rally the homeowner’s association this Halloween. Rather than sporting a “love to hate” mentality toward Karen, maybe we should just get rid of her.

Get The Morticia Addams Look Just In Time For Halloween

Tags: Karen , karne costume , spirit's karen costume , offensive Halloween costumes , racism , white privilege
Support Feminist Media!
During these troubling political times, independent feminist media is more vital than ever. If our bold, uncensored reporting on women’s issues is important to you, please consider making a donation of $5, $25, $50, or whatever you can afford, to protect and sustain BUST.com.
Thanks so much—we can’t spell BUST without U.