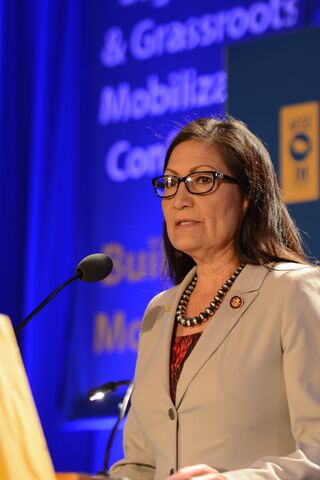 Democratic Representative of New Mexico, Deb Haaland, is now a leading candidate for President-elect Joe Biden’s Cabinet position as interior secretary, according to The Hill. If appointed, Haaland would make history as the first-ever Native Cabinet member.

Haaland, who was recently reappointed to New Mexico’s 1st Congressional District, has made large strides to preserve land and protect Indigenous communities. Her 30-by-30 resolution hopes to conserve 30% of U.S lands and oceans by 2030, and her initiatives surrounding the COVID-19 crisis largely focus on the disproportionate affects the virus has had on Native communities. The Department of the Interior greatly aligns with this work, overseeing a large sum of surface land and shores, managing both the Bureau of Indian Education and the Bureau of Indian Affairs, and facilitating the country’s natural resources.

If selected, Haaland could help advocate for Native communities in the face of larger corporations as well as heal the damages caused by the Trump administration. The interior's current secretary, David Bernhardt, has continuously supported Big Oil plans, which have caused several violations including the building of the Keystone XL pipeline that would “cross Indigenous lands in South Dakota, Oklahoma, and a few other states.” The Trump administration has also attempted to cut funding of Indigenous education and COVID-19 protections. In an interview with Vox, Haaland said, “This administration has essentially destroyed and gutted the department and policies. President-elect Biden’s commitment to fighting climate change and protecting our environment is the most progressive we’ve ever seen, and it will fix that.”

New Mexico Makes History, Electing All Women Of Color In Its House Delegation

We're Still Celebrating Kamala Harris' Historic Win And Some Of Our Favorite Celebs Are, Too!

Tags: deb haaland , biden , cabinet , interior secretary , first native american
Support Feminist Media!
During these troubling political times, independent feminist media is more vital than ever. If our bold, uncensored reporting on women’s issues is important to you, please consider making a donation of $5, $25, $50, or whatever you can afford, to protect and sustain BUST.com.
Thanks so much—we can’t spell BUST without U.