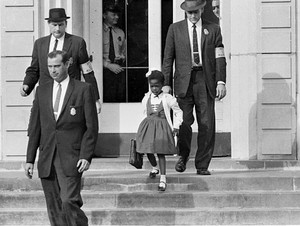 Lucille Bridges, the mother of one of the most recognizable and influential civil rights leaders, passed away yesterday. Because human life is fleeting, we tend to think of great injustices in this country, especially slavery and state-mandated apartheid, as a long time ago — but to have lost the mother of Ruby Bridges in 2020 says a lot about our collective memory and how the past is closer to us than we think. Lucille was 86 and died at her home in Louisiana.

On November 14, 1960, with the escort of federal marshals, Lucille walked her daughter to school, braving vitriol and abuse from white townspeople. Protestors shouted, “Two, four, six, eight, we don’t want to integrate,” and threw eggs and tomatoes at Lucille and her daughter on their way to school. That day gave us a picture that remains one of the most enduring symbols of the Civil Rights Movement. At just six years old, Ruby was one of the first Black students to integrate an all-white school in the South five years after the Supreme Court ruled segregation unconstitutional.

According to the National Women's Museum of History, “The Bridges family suffered for their courage.” Abon, Ruby’s father, lost his job, grocery stores refused to sell to Lucille, and Ruby’s grandparents were evicted from the farm where they had lived for 25 years. Despite it all, Lucille unwaveringly walked her daughter to class each day.

“Today our country lost a hero... She helped alter the course of so many lives by setting me out on my path as a six-year-old little girl. Our nation lost a Mother of the Civil Rights Movement today,” Ruby wrote in an Instagram post.

Today our country lost a hero. Brave, progressive, a champion for change. She helped alter the course of so many lives by setting me out on my path as a six year old little girl. Our nation lost a Mother of the Civil Rights Movement today. And I lost my mom. I love you and am grateful for you. May you Rest In Peace. Lucille Bridges (August 12, 1934 - November 10, 2020)

Imagination is necessary for progress; how different our classrooms might look if Lucille had lacked it. May we never forget the sacrifices made by those before us, and may we hold on tight to our visions of a more equitable future, as Lucille did.