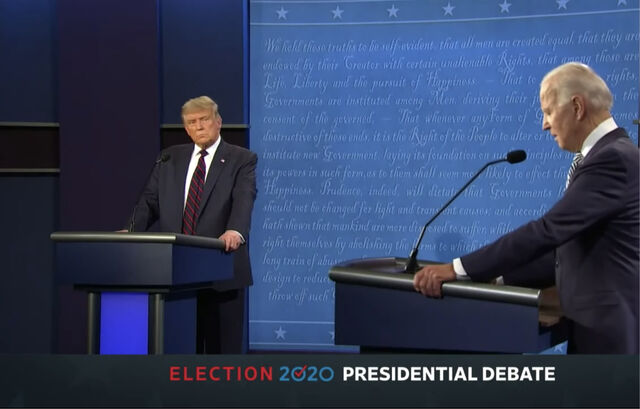 If you’re like any other anxious American voter who was curious about how the first Presidential debate went but too scared or too tired to watch, just turn on MTV and put on any reality show and you’ll get the gist. There was screaming, verbal taunts, mocking of dead children, and, of course, copious amounts of half-truths and straight up lies. To help figure out what was true and what was fake from all of Trump’s interesting claims last night, we compiled fact-checking on some of his declarations. While we are mainly focusing on Trump’s misinformation, Biden also had his moments. All of this information was obtained from factcheck.org, a nonprofit, nonpartisan website that monitors factual accuracies in U.S. Politics.

Trump was not correct when he said the Obama-Biden Administration “brought back nothing.” While 578,000 jobs were lost during their first four-year term, which included the Great Recession that began in 2007, Obama's second term added 225,000 jobs a month, as per The Washington Post.

The term and use of “super-predator”

During the debate, Trump kept saying that when Biden was involved in the 1994 Crime Bill, he called African-Americans “super-predators.” That statement was famously uttered by Hillary Clinton, not Biden.

During the debate Trump kept saying that when Biden was involved in the 1994 crime bill, he called African-Americans “super-predators.” That statement was famously uttered by Hillary Clinton, not Biden.

Trump bragged about his support from law enforcement organizations. He claimed the support of a Portland, Oregon, sheriff. He was wrong.

The sheriff in Multnomah County, which includes the city of Portland, clarified he has not endorsed Trump: “In tonight’s presidential debate the President said the ‘Portland Sheriff’ supports him. As the Multnomah County Sheriff I have never supported Donald Trump and will never support him,” Sheriff Michael Reese tweeted. Trump has, however, received the endorsement for re-election from David Beth, the sheriff in Kenosha, Wisconsin.

Trump yet again exaggerated when a COVID-19 vaccine will be made available to the American public. He said vaccine companies “can go faster” than they are working right now. The president also went on to suggest that any delay would be political. This claim is not backed up with any evidence.

The government does plan on shipping vaccines within 23 hours of approval from the Food and Drug Administration, but the vaccine would be available first to prioritized Americans, like those with medical disabilities. Many experts believe the vaccination process could possibly continue into 2022.

One of the most insidiously fascist moments in the debate was Trump trying to make the case that mail-in voting will result in fraud and that the election results must be questioned.

While it is true that there was an incident in which 1,000 people in Virginia have received two mail-in ballots by mistake, it’s not evidence of fraud. Election officials have repeatedly emphasized that people who get two ballots won’t be able to vote twice.

Even though Trump claims that mail-in or absentee ballots encourage more instances of voter fraud than in-person voting fraud, the numbers are insignificant and the number of known cases are very rare. Despite this, Trump continues to push that if the election results don’t align with his interests, they must be questioned. Furthermore, he told the Proud Boys to ‘stand by,’ a threat that could become violently true after the election. Trump doesn’t want you to vote. Please vote.

Death And The Maidens: How Previous Pandemics Helped Make The World A Better Place For Women

Tags: fact check , trump , biden , presidential debate , presidential election
Support Feminist Media!
During these troubling political times, independent feminist media is more vital than ever. If our bold, uncensored reporting on women’s issues is important to you, please consider making a donation of $5, $25, $50, or whatever you can afford, to protect and sustain BUST.com.
Thanks so much—we can’t spell BUST without U.