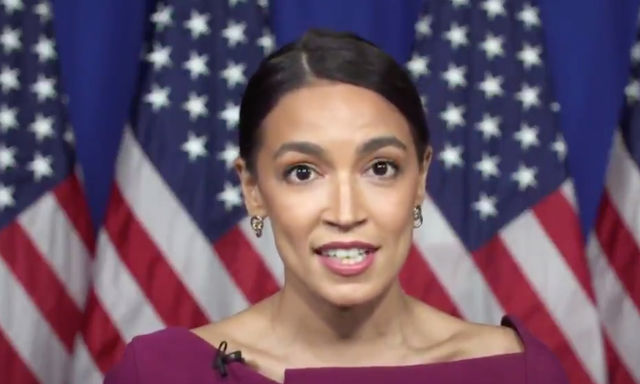 Last night, the second of the three-night Democratic National Convention, delegates from all 50 states and seven territories participated in the nomination roll call, officially nominating former Vice President Joe Biden for president. The roll call, which was done via pre-recorded video and zoom for the first time in the DNC’s 172 year history, featured a number of moving speeches from diverse citizens and elected officials from across the nation.

One of these short testimonials came from Congresswoman Alexandria Ocasio Cortez of New York, who was featured seconding a nomination for Senator Bernie Sanders from the Ltn. Governor of Vermont. “In fidelity and gratitude to a mass peoples' movement working to establish 21st century social, economic, and human rights,” Ocasio Cortez stated, “I second the nomination of Senator Bernard Sanders of Vermont for President of the United States of America.”

"In fidelity and gratitude to a mass peoples' movement working to establish 21st century social, economic, and human rights – including guaranteed health care, higher education, living wages, and labor rights for all people in the United States."
– @AOC#DemConvention pic.twitter.com/KbFL5xl0Uw

Traditionally, the names of other Democratic candidates who meet the delegate threshold are put into nomination so that their delegates have an opportunity to vote for them even though the outcome of the convention is typically known at this point in the nominating process. This is why over the course of the primaries, even if your state voted after Biden became the presumptive nominee, you had the opportunity to vote for one of the other candidates on the ballot as a means to select delegates that promote the different candidates’ viewpoints. The nomination of Sen. Sanders on behalf of Vermont, and subsequent speech and nomination from AOC, while an example of the resilience of the progressive #NotMeUs movement, were at their core a formality of the DNC nomination process.

However, it seems that a great deal of the Internet, including NBC News and a number of other media outlets, don't quite understand how national conventions work.

Following the nomination roll call, NBC News posted a tweet with an extremely misleading headline that insinuated AOC’s nomination of Sanders was a jab at Biden. “In one of the shortest speeches of the DNC,” NBC News stated, “Rep. Alexandria Ocasio Cortez did not endorse Joe Biden.” At a time when the Democratic Party is unifying and rallying together to defeat Donald Trump, this divisive tweet led to heated debates and attacks online and stayed live for hours despite a number of calls to take it down. At 1 a.m., NBC finally released an editor's note admitting that staff should have provided more context for AOC’s speech.

This tweet should have included more detail on the nominating process.

We have deleted the tweet to prevent its further spread, but it can be seen here for the record. pic.twitter.com/txXo4CCMOt

Ocasio-Cortez was asked by the DNC to second Sanders' nomination. The nomination is a procedural requirement of the convention.

Ocasio-Cortez has previously endorsed Biden, & her speech was similar in length to other nominating speeches.

“You waited several hours to correct your obvious and blatantly misleading tweet,” Rep. Ocasio Cortez tweeted after NBC’s editor’s note. “It sparked an enormous amount of hatred and vitriol, & now the misinfo you created is circulating on other networks. All to generate hate-clicks from a pre-recorded, routine procedural motion.”

AOC later cited that NBC and other news networks were briefed on her procedural remarks well in advance of the nomination roll call, meaning they should have known that it was going to happen before their problematic tweet was sent. AOC went on to tweet a follow-up, clearing up any confusion about her nomination of Sen. Sanders. “If you were confused, no worries! Convention rules require roll call & nominations for every candidate that passes the delegate threshold. I was asked to 2nd the nom for Sen. Sanders for roll call. I extend my deepest congratulations to @JoeBiden - let’s go win in November,” she stated.

Congratulations, @JoeBiden - I deeply look forward to fighting for our future together and reclaiming our democracy in November.

Thank you @DemConvention for having me deliver Sen. Sanders’ roll call nomination speech.

Twitter users are not at fault for not fully understanding the nomination process, as it is incredibly confusing and was not made any easier to understand by misleading articles from NBC and other media outlets. As political experts explained this morning in a trending Twitter moment, however, AOC’s nomination was entirely routine, and similar instances have happened in the recent past at Democratic National Conventions. In 2008, Dolores Hureta, co-founder of the United Farmers Union, nominated Hillary Clinton for president at the DNC on behalf of California even though a majority of the delegates were for Obama going into the convention.

Clinton later went on to suspend the official roll call on August 27, 2008 and move that Obama be selected as the Democratic Nominee by acclamation. Prominent Democrats Jerry Brown, Jesse Jackson, Gary Hart, and Ted Kennedy are all also former Democratic presidential candidates who had their names added to the roll call even after their opponents received the majority nomination.

AOC’s speech and nomination of Sen. Sanders was a showcase of why primaries are an important part of our democracy. This process allows a broader range of voices to be heard when political parties are selecting their candidates. In this case, delegates for Bernie Sanders helped influence the Democratic platform, making it more progressive than it otherwise would have been and giving Sanders supporters additional ways to impact American politics and policy.