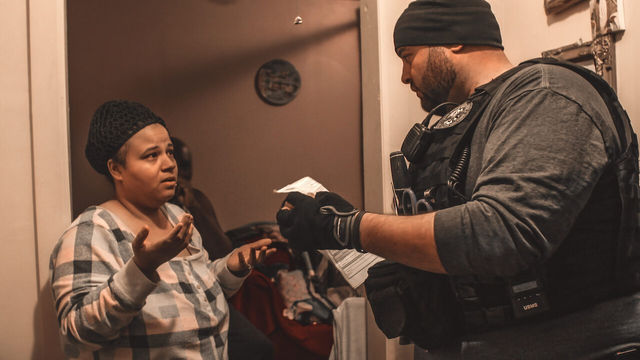 “As harsh as it may sound, the government didn’t hire me for my moral views.”

“We don't pick and choose groups of people based on race, color, religion. We just look for people who are removable.”

These are just some of the quotes from Netflix’s new docuseries.

Immigration Nation explores the ongoing immigration crisis in the United States and the widely contested work of Immigration and Customs Enforcement (ICE) agents under the Trump Administration. The six-part highly-anticipated docuseries, directed by Christina Clusiau and Shaul Schwarz, was released today, August 3, on Netflix.

The docuseries was shot over the course of three years. Schwarz and Clusiau follow the day to day life of ICE agents, lawmakers, attorneys, and activists. They also follow a wide range of undocumented immigrants, from longtime residents that have payed taxes for 10 years to deported U.S. military veterans to new arrivals escaping persecution.

In 2017, the Trump Administration implemented a “zero-tolerance" family separation policy, subsequently tearing families apart, separating children and parents. Trump’s tough immigration crackdown over the years coincides with his plans to build a wall between Mexico and the US to “stop” illegal immigration. Despite promising that Mexico will “pay for the wall”, the border wall has not increased very much since his inauguration, and Mexico has not paid for it.

ICE and the nation’s detention centers received a lot of media attention in 2018 because of photos and reports that showed inhumane treatment of immigrant detainees. In 2020, because of COVID-19, a U.S. judge ordered that all minors with their parents in ICE custody must be released by July 17. That order has yet to be carried out. Since the COVID-19 outbreak, ICE detention centers have been using disinfectants that causes bleeding and intense pain over 50 times a day. Many have compared these conditions to the gas chambers used in the Holocaust.

Schwarz and Clusiau began working on the series after President Trump was inaugurated in 2017. At first, they got full support from Department of Homeland Security (DHS) and ICE high-up administrators. They were given behind the scene access to immigration facilities and town hall meetings. As Immigration Nation neared completion, the cooperation between the directors and the agency began to diminish.

At first approved by ICE leadership, the Trump administration tried to prevent the release of certain segments and to block the release of the docuseries in its entirety until after the 2020 election. The six-part documentary shows some very disturbing and often illegal moments including ICE officers lying to immigrants to enter their homes and even shows one officer picking the lock to an apartment building illegally during a raid.

The Times reported that "the filmmakers observed numerous occasions in which officers expressed satisfaction after being told by supervisors to arrest as many people as possible, even those without criminal records" despite the agency claiming to be only trying to deport murderers and rapists.

In the docuseries, ICE agents complain about being compared to Nazis and claim they are not racist and only 'look for people who are removable'. ICE has also come under fire recently for telling foreign students if their colleges go exclusively online this fall, they must leave the U.S.

Jenny Burke, a spokesperson for ICE, denied the claims and told The Times the agency "wholeheartedly disputes the allegations brought forward by filmmakers of this production”. But, thankfully, the agency was not able to stop the release of Immigration Nation and it is now available on Netflix.

Check out the trailer for Immigration Nation below:

Tags: Trump Administration , ICE , Immigration Nation , DHS , 2020 election , detention facilities
Support Feminist Media!
During these troubling political times, independent feminist media is more vital than ever. If our bold, uncensored reporting on women’s issues is important to you, please consider making a donation of $5, $25, $50, or whatever you can afford, to protect and sustain BUST.com.
Thanks so much—we can’t spell BUST without U.