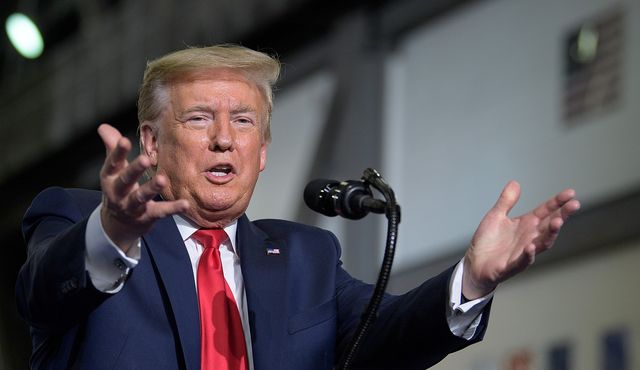 We’ve come to the conclusion that even if there is some mass document in the Oval Office with every last detail of the President’s job description, Trump almost certainly has not read it. On Thursday morning, President Donald Trump tweeted a statement that had Twitter-goers reeling. Please, read the following with your very best impersonation of Trump: “With Universal Mail-In Voting (not Absentee Voting, which is good), 2020 will be the most FRAUDULENT Election in history,” he wrote. “It will be a great embarrassment to the USA. Delay the Election until people can properly, securely and safely vote???”

The Internet was quick to call the President’s statement on delaying the election dictator-like, which is a completely fair assessment. But while Trump thinking that he has ultimate dictator-like authority is concerning, there might not really be cause for panic this time around. Trump deploying unmarked federal officers to various U.S. cities where protests are taking place? Yeah, that’s scary. This tweet? Well, it only really proves that the President has once again made a statement proposing something that he literally has no authority over. Let’s walk through exactly why Trump cannot delay the 2020 presidential election.

Under the 20th Amendment, which describes presidential terms and successions as well as congressional assembly, the Constitution states that both the President and Vice president must end their terms of office at 12 p.m. (very specific) on the 20th of January following a general election year. This is important to remember, as even if every possible scenario took place for which voting could be delayed, Trump would still have to be dragged out of the White House on January 20 no matter what (which might still happen even if the election goes as planned, but that's besides the point). The rules on how elections must play out are put rather plainly in the U.S. Constitution, none of which describe the President as having any power over whether or not the election process can be changed. The Congressional Research Service (CRS) states that “while the Executive Branch has significant delegated authority regarding some aspects of election law, this authority does not currently extend to setting or changing the times of elections.” In fact, it all comes down to Congress and individual states themselves.

Ultimately, Congress is the only group that has any power over changing a federal election. As experts like the National Constitution Center (NCC) have stated, however, this would be extremely unlikely, as not only would any changes have to be voted on by both the Democrat-led House and the Republican-led Senate, but a presidential election had also never been changed in response to an emergency over the entire 244-year history of the United States. Theoretically, governors of individual states could delay voting if they find themselves in a state of emergency as November 3 approaches, but they have no power over actually changing the election. You want to get into the nitty gritty of what would happen if some individual states postpone voting? Well, that means we have to discuss everyone’s least favorite U.S. institution following the election of 2016: the Electoral College.

The Constitution states that members of the Electoral College must give their votes for President and Vice President “on the first Monday after the second Wednesday in December.” No explanation for why that rule is phrased that way, but this year, the first Monday after the second Wednesday is December 14. As the NCC states, “Another part of the election law requires the states to send in their electoral votes to Congress by December 23rd, 2020.” All this means is that even if certain states postpone voting, if they do not have the electoral votes by December 23, that state would not be counted in the election. All of the above is extremely unlikely, but playing games of “what if” is kind of getting fun.

What if a few states don’t get their electoral votes in and there is no majority winner for POTUS? The constitution has a plan for that. If a presidential candidate does not receive a majority vote, the House is left to select the next President and the Senate is left to select the next Vice President. Situations like this have only occurred a total of three times in all of U.S. history — one of which you’ve actually probably been reminded of rather recently (if you watched Hamilton on Disney+, that is). Remember that song where Hamilton spits one of the coldest lines in the entire musical (“Jefferson has beliefs, Burr has none”)? That was during the election of 1800, where Jefferson and Burr tied for president with 73 electoral votes each, leaving the House to ultimately vote Jefferson into office.

So, 500 words, a few semi-confusing constitutional amendments, two coffee breaks on my end, and one Hamilton reference later, we have now officially learned that no, Donald Trump has absolutely no authority over delaying the 2020 election, and the possibility of Congress deciding to do so is extremely unlikely. Even though we might be able to sleep a little easier knowing this, the President's latest Twitter tantrum proves that he still can’t quite wrap his head around how elections work:

Glad I was able to get the very dishonest LameStream Media to finally start talking about the RISKS to our Democracy from dangerous Universal Mail-In-Voting (not Absentee Voting, which I totally support!).

Must know Election results on the night of the Election, not days, months, or even years later!

And don’t even get us started on how mail-in voting and voting by absentee ballot are literally the same exact thing. Register to vote here or find out how you can vote by mail below.

LESS THAN 100 DAYS UNTIL ELECTION DAY ? Are you set up to vote by mail? I did it all the time when I was traveling a lot for work. It’s easy, gives you time to consult your voting study guide, and bonus, it makes the President mad! @votesaveamerica is a one-stop-shop with the tools to request a #VoteByMail ballot and ways to encourage others to help make every last vote count ? votesaveamerica.com/everylastvote SWIPE FOR DEADLINES IN YOUR STATE AND WAYS TO HELP