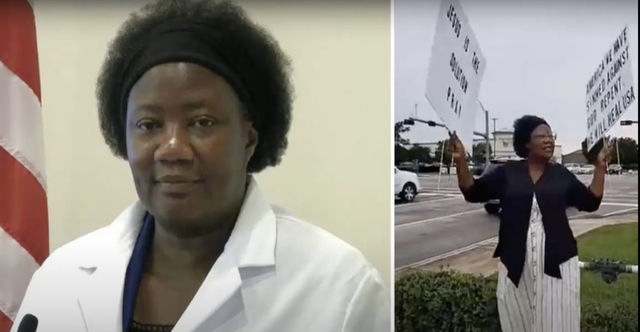 On Monday, a Tea Party Patriots-backed group known as "America's Frontline Doctors" held a press event in front of the U.S. Supreme Court. A doctor claimed that she had "cured" COVID-19 by using a combination of Hydroxychloroquine, Zithromax, and zinc, a claim not supported by any strong scientific research. She also said that wearing a facial covering and social distancing were unnecessary.

Breitbart News, the right-wing news site, published the video which was viewed millions of times before it was removed from the social media sites Facebook, Twitter and YouTube because it broke their rules on misinformation. The Food and Drug Administration removed the medication hydroxychloroquine as treatment for COVID-19 because they said that it had not been proven to actually treat the virus.

Stella Gwandiku-Ambe Immanuel is a Cameroonian-American doctor, author, and pastor. She has spread false and dangerous medical advice in the past, as well. Surprise, surprise she is also very homophobic.

Immanuel preaches her beliefs on Fire Power Ministries and Fire Power, a radio and television show. She has written several books as part of her Occupying Force series and she has been an outspoken supporter of Donald Trump. Immanuel has been very critical of "unmarried couples living together, homosexuality, bestiality, polygamy" and "homosexual terrorism.”

Immanuel's medical claims are often combined with her religious and spiritual beliefs. One of her claims is particularly concerning. She has said that gynecological illnesses are the result of having sex dreams with an incubus or succubus and receiving "demon sperm.” According to Immanuel, endometriosis, cysts, infertility, miscarriages, and sexually transmitted infections are caused by individuals having sex in their dreams with these demons.

In a 2015 sermon, Immanuel said that alien DNA is used in vaccines and that reptile people run the government. She also believes that Illuminati are using witches and demons to destroy the world with abortion and gay marriage. Immanuel also said that she believes the government is trying to make a vaccine for people who are religious.

Twitter had a lot to say about this whole situation with Dr. Immanuel:

On July 28, Trump again doubled down on hydroxychloroquine and cited Dr. Stella Immanuel, who believes in alien DNA and sex with demons. Even Twitter & FB are taking down his dangerous BS. Yet this dangerous fool remains president until next January 20, in the best case scenario.

150,000 Americans have died and all anyone can talk about is demon sperm and alien DNA. This is the dumbest country in the entire multiverse.

Immanuel recently told the AP that “the average American should be concerned" about COVID-19 and has denied involvement with the Trump campaign. In regards to Facebook taking down her video riddled with misinformation, Immanuel said that, "Jesus Christ would destroy Facebook’s servers" if the video was not restored.

This Nonprofit Is Building Tiny Homes For Black Trans People