Elizabeth Warren Drops Out of the Presidential Race 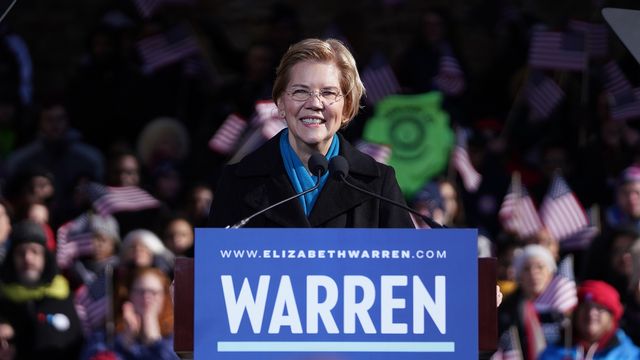 Senator Elizabeth Warren (D-MA) has officially ended her 2020 presidential campaign. The senator was unable to amass the number of delegates needed to move forward and won no states in the process either, including her home state of Massachusetts. In a call to campaign staff earlier today, Warren tells us the ultimate takeaway from her campaign should be this: "Choose to fight only righteous fights, because then when things get tough — and they will — you will know that there is only one option ahead of you: Nevertheless, you must persist."

Warren started her career as a public school teacher, before earning a law degree and becoming a professor. Her academic work focused on how bankruptcy law affects middle class Americans, which she considers the catalyst that turned her into a Democrat. She became a public figure in 2010 when President Barack Obama appointed her as a special advisor to the Consumer Finance and Protection Bureau, created after the financial crisis of 2008. In 2012, she was elected to the Senate, beating popular Republican incumbent Scott Brown.

Warren’s campaign started strong, with polling placing her near Joe Biden by October of last year. Her policy-driven, detail-oriented style of campaigning earned her legions of supporters impressed with how thoroughly she knew the issues affecting everyday Americans: “Warren Has a Plan for That” becoming a popular refrain. Warren earned the support of many trans activists, many of whom “shared similar accounts of how she had earned their support and trust: campaign staffers reached out for in-depth policy discussions on their rights and safety, and they later saw their ideas echoed in the platform and in Warren’s own words,” according to one recent article from The Guardian. This personal approach and willingness to listen to marginalized communities was one of her greatest strengths as a candidate. She even received an endorsement from Kimberlé Crenshaw, the law scholar who coined the term “intersectionality.”

I voted for @ewarren today b/c she listens to Black women, understands that “Economic justice has not ever been sufficient to ensure racial justice,” admits mistakes, is a tough broad, and b/c we now see how not having a leader w/ a plan costs lives. https://t.co/RHIMCN6TE4

At a recent debate, she absolutely wiped the floor with Michael Bloomberg, exposing him as a misogynistic creep. She called him out for his use of non-disclosure agreements preventing former his employees from speaking out about his alleged inappropriate behavior, which led him to release three people from those agreements.

Ultimately, she struggled to build a diverse base of support. She was popular among college educated white-women, but failed to capture the vote from people under 30 and working class Americans, groups that overwhelmingly support Bernie Sanders. Warren has also (rightfully) been called out for saying she’s “a capitalist to [her] bones,” the fact that she was a Republican until she was 47, and her problematic history claiming Native American ancestry.

Now that Warren has dropped out, Sanders is the only progressive candidate left. There are some supporters out there who claim that Warren stayed in the race too long and thwarted his chances of winning more states, but it's important to note that the math there doesn’t add up! For one thing, Sanders' failure to capture several key demographics is on him and his campaign, not Warren (especially considering he has had years since his last presidential run to widen his base). For another, Joe Biden outperformed, and no one really planned for that; and finally, many Warren supporters might have deflected to Biden. There also exists a demographic of Warren supporters who don’t want to vote for Sanders because his supporters are “mean,” which is, bluntly, a childish and privileged viewpoint: people are dying without healthcare coverage.

Sanders and Warren are stronger together. Both candidates and their supporters can learn from each other. I am grateful to Elizabeth Warren and her campaign for the work they've done, and though I would have been thrilled to see a woman finally become president, there could still be a chance to elect a feminist president this year.