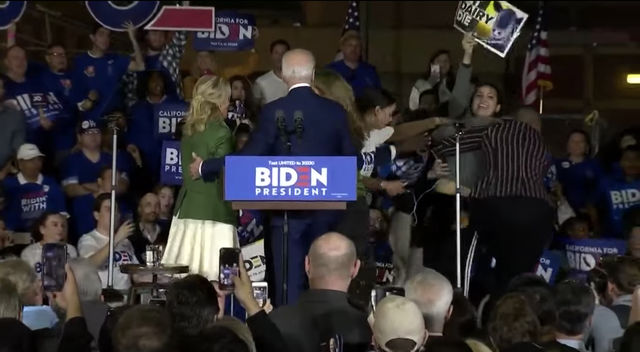 BREAKING: Protesters rush the stage toward Joe Biden during #SuperTuesday night speech; they were stopped by people near Biden. Biden is continuing with his speech. pic.twitter.com/0tI9uSj7pQ

With stiff arms, Dr. Jill Biden, former Second Lady and possible First Lady, held the protester back and away from her husband. Now, an iconic photo is circling the internet of Dr. Biden with a fierce look, baring her teeth as she holds the protester back. After Symone Sanders stepped in, Dr. Biden said to her husband, "You're OK. You're OK," and calmly turned back to the audience.

Jill Biden using good pass-pro technique. Moves her feet, extends her arms, keeps balanced and stays between rusher and Joe. Should have been a left tackle. https://t.co/DejYnHwuYH

Symone Sanders, worked for Bernie Sanders as National Press Secretary for the 2016 election, and now works as Senior Advisor for Joe Biden. But, after the Super Tuesday events, many think that she should be made Biden’s new Head of Security. She really went in for the kill, tackled the protester and dragged her off stage in a matter of milliseconds. “I broke my nail. #SuperTuesday” Symone said on Twitter later that day.

? SYMONE SANDERS FROM OUTSIDE ? pic.twitter.com/5zLMp28pwl

The power that these women showed reminded a lot of people of when Karine Jean-Pierre, a political commentator, all of 4’11,’’ shielded Kamala Harris from a protester who ran up on stage in June 2019.

Damn, Dr. Jill Biden and Joe’s younger sister surrounded him like Secret Service agents to protect him, then Symone Sanders came in for the tackle. That’s love from powerful women. https://t.co/lwg2bepZxl

This quick altercation already has hundreds of hilarious memes made in its honor that has me out of breath. Many were very proud that Joe has such a fierce group of women protecting him. Others had more profound questions that needed answering: Should Symone Sanders become his new one woman Secret Service team? Will Jill be drafted?

While both of these women were incredibly powerful and intelligent to begin with, this week, “Symone’d” became a verb and Dr. Biden proved that not only is she an amazing educator but she could also have an impressive career as a football player. Who needs a security detail when you have powerful women to back you up?