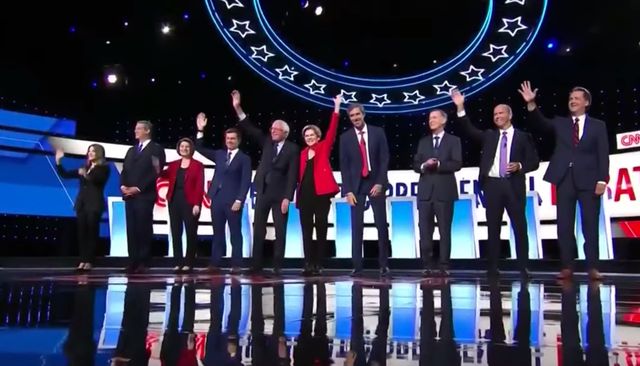 Last night in Detroit, ten candidates took the stage for the second Democratic primary debate. Like the first debate, CNN distributed the candidates over two days, so you’ll have to tune in tonight to hear from the remaining presidential hopefuls. Here’s the break down:

It’s almost trite to say that CNN runs debates like boxing matches or reality TV—but it’s worth noting briefly as we start out. CNN’s promo included dramatically-lit headshots of Warren and Sanders staring defiantly into the camera, plus a gravely, deep voice (I’m pretty sure that's the same guy who does trailers for mediocre action movies). But if CNN was hoping to catch Sanders and Warren going head-to-head, they ended the night disappointed.

The debate, in part thanks to the way moderators directed their line of questioning, boiled down to a divide between moderates and progressives. So, one way to think about last night is as a vignette of a major rift in the party regarding how the Dems can beat Trump. Should they appeal to centrist views to pull white voters in states like Wisconsin and Michigan or should they call for deep, progressive change and energize people to get to the polls?

Sanders and Warren teamed up as the most prominent progressives on stage, and they strategically chose to postpone what many predict will be an inevitable stand-off. Both made strong cases for Medicare-for-all and big structural change.

Ryan, Bullock, and Hickenlooper are decidedly moderate, and I don’t have much to say about them besides the fact that their performances were stale and they sound like Republicans. John Delaney is a middle-of-road guy as well. Some sources are reporting that Delaney made a stir by repeatedly disputing Warren and Sanders’ progressivism, but let’s all admit Delaney’s most memorable moment came when Warren succinctly tore him apart: “I don’t understand why anybody goes to all the trouble of running for President of the United States just to talk about what we really can’t do and shouldn’t fight for.”

Amy Klobuchar represents a moderate voice too. She stressed her capacity to win over working-class white voters and repeatedly expressed her skepticism toward sweeping, progressive policy proposals. I think she wanted to present herself as practical and trustworthy, but her performance largely translated as a call to “dream smaller,” as Charles M. Blow of the NYT put it.

Oh, and Beto O’Rourke was technically there too, but he didn’t make much of an impact. He’s already qualified for the next two debates, so we’ll see if he can reverse his tailspin.

But there were other memorable exchanges too. In spite of everything, Marianne Williamson captured attentions. She mentioned the phrase “dark psychic force,” she described debate discussions as “wonkiness,” and she never let us forget she found fame as a spiritual leader. But Williamson stood out with her comments about the Flint water crisis and her support for reparations. That said, she’s rightfully received a lot of criticism for her hyper-individualist “harness love” theories and her proximity to the idea that you can cure diseases with “positive thinking.” In all likelihood, we won’t see her again in future debates.

My favorite quote of the night came when Sanders called out Jake Tapper after a question about Medicare-for-all. Tapper framed the question around a Republican refrain: Medicare-for-all “would eventually take private health insurance away from more than 150 million Americans in exchange for government-sponsored health care for everyone.” Sanders clarified the misleading claim and replied, “Jake, your question is a Republican talking point."

Vox listed the Republican Party as one of the “winners” of the debate because of the way CNN crafted the discussion:

If you were Donald Trump or another Republican lawmaker running for reelection in 2020, you probably had a good time watching Tuesday night’s debate. Several of the major issues were framed by the moderators in terms Republicans would love: Will you take private insurance from Americans to give them Medicare-for-all? Will you raise taxes on the middle class to do it? Will you decriminalize illegal border crossings and give unauthorized immigrants free health care? Are Democrats going too far to the left?

DJ Collectives That Center Women, Queer, And Nonbinary Folk Are Scratching Out Gatekeepers

Tags: Democratic Debate , democratic , debate , election , 2020 , moderate , progressive
Support Feminist Media!
During these troubling political times, independent feminist media is more vital than ever. If our bold, uncensored reporting on women’s issues is important to you, please consider making a donation of $5, $25, $50, or whatever you can afford, to protect and sustain BUST.com.
Thanks so much—we can’t spell BUST without U.