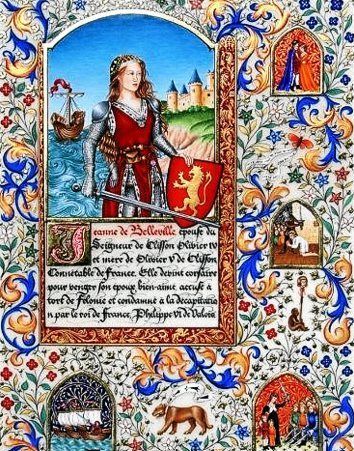 Strap in for the tale of Jeanne de Clisson, the gentile noble lady-turned-warrior pirate and traitor. Game of Thrones’ Cersei has nothing on this vengeful woman.

We’ll be travelling to 14th century France to meet a lady who took the term ‘woman scorned‘ and ran way past the line with it, going from a rich noble-born to making a name for herself as both France’s number one enemy and a fearless swashbuckling pirate! Ready? Let’s get to it, then.

Born in Brittany, France, in 1300 to wealthy, titled parents, Maurice IV of Belleville-Montaigu and Létice de Parthenay, Jeanne De Clisson had a story that started off as that of your average 14th century noble-born woman. And by that, I of course mean that Jeanne was married off at 12. (Wasn’t the past great!?).

She lived her life the way a well-behaved noble lady was expected to, popping out babies and remarrying other rich, influential men when her husbands died. So far, so standard.

By the time Jeanne reached her thirties she was onto marriage number three, to nobleman Olivier De Clission. But Jeanne and Olivier’s marriage was actually incredibly unique for this era: you see, they actually loved each other.

Unsurprisingly, with people being married off purely based on how it would help build up a family’s wealth and title, true “love matches” were few and far between. Luckily, Jeanne and Olivier were the exception to that rule.

Together, they lived in a blissful bubble. They had five children and flitted between their family castle and manor with little to no drama. Life was perfect.

That is, until war tore their world apart. 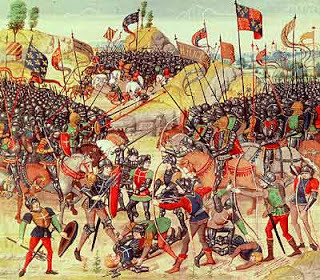 War of Breton Succession, Battle of Auray from Froissants Chronicles

In 1337, France and England were at each other’s throats, fighting for the right to rule over France. You see, ten years earlier, French King Charles VI had died without leaving a clear heir, meaning the crown was anyone’s to grab. (Well, if you could come up with a decent claim for it!) To make things even worse, this wasn’t your usual battle for power, oh no: this went on so long that it became known as the ‘Hundred Years’ War.’

And you know what makes any already confusing and convoluted war even better? That’s right, another mini war to take place within the already existing war!

Enter: The War of Breton Succession

In 1341 John ‘The Good’ of Brittany, who ruled over the homeland of Jeanne and her brood, died childless. This meant that he left no clear-cut heir to take his place (apparently, France loves a theme). Thus, two rival factions made a claim to Brittany. John Montfort, who was backed by the English, and Charles of Blois, who was both married to John’s niece and had the French nobility’s support.

As battle over their Brittany home sped up, Olivier and Jeanne opted to give their support to noble fave Charles of Blois, with Olivier stepping into the role of one of Charles’ military commanders.

This would prove to be a bad choice. In 1341, Olivier was sent to defend the town of Vanne against English invaders. Sadly, Vanne fell, and Olivier and several others were captured and ransomed.

Left alone with five kids, her beloved husband locked up and her home at war, this was far and away one of the darkest times in Jeanne’s life.

But suddenly, there was a light! Olivier’s ransom was set incredibly low and he was released. Not only that, but England and France had signed a truce. To celebrate this incredible turn of events, Olivier was invited to take place in a tournament.

The family back together, a lovely day out, and relative peace? Surely for our lovebirds Jeanne and Olivier, the future was looking bright?

Nope. It was all a ruse.

It turned out that Charles of Blois suspected that Olivier’s ransom had been set so low because he was actually working with the English to assist their seize of Vennes. He had lured Olivier to the tournament to arrest him.

Olivier was detained and sent to Paris for trial. There, under the blessing of French King, Phillip the Fortunate, he was sentenced to death, despite no clear proof of guilt found against him.

And so Olivier was executed as a traitor—essentially, because his boss reckoned he might have been one. 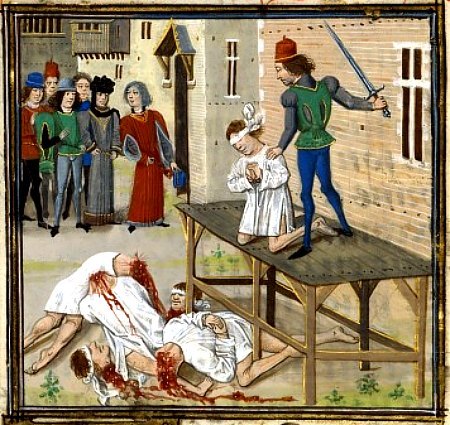 Something had shattered inside Jeanne, and what replaced it was cold steel.

To further her pain, Olivier’s body was desecrated, his body strung up by the armpits and his head sent to be placed on a spike in Nantes as a warning to others.

Emotionally broken, Jeanne actually took her sons to see their father’s head in Nantes. And after that minor traumatic moment was over, she decided to pack up her stuff, sell the family’s lands, raise a small army of fighters, and set out to avenge her husband.

Newly armed and incredibly dangerous, she was determined to reek bloody revenge on Charles of Bois, King Phillip the Fortunate, and France itself.

Jeanne’s first stop was to the castle owned by Galois de la Heuse, a friend of Charles of Bois. She turned up, kids in tow, and asked to be let in. And of course they let her in! I mean, sure, she was the wife of a traitor, but how much of a threat could one woman be? Right….

By morning, everyone in the castle had been killed.

All except for a few wide-eyed survivors who Jeanne let flee so they could spread word of her murders.

In 1343 Jeanne had been declared a traitor and, with the French fuzz catching up to her, she decided to take her fight to the sea and become a pirate (as one does).

She bought three ships with the money she had from selling all her lands and goods. She then ordered them to be painted black and their sails dyed crimson. With her incredibly dramatic ships set, she set sail across the channel.

Now, if you thought that seeing the pirate skull cross bones set fear into the hearts of sailors, that had nothing on Jeanne and her merry band of murderers.

French crews who saw those crimson sails emerging from the fog knew it meant one thing. They were about to die.

Jeanne and her crew set their sights on any and all French ships, capturing them and slaying the entire crew. And unlike many other pirates, noble-borns weren’t kept for ransom. Instead, it’s believed that Jeanne would behead them herself.

Yet it wasn’t all stabby stabby kill time. As she had before, Jeanne left a few survivors. Not because she was being nice, but so word would spread back to King Philip of the horror she was wreaking across the seas.

Now Jeanne wasn’t just about indiscriminate murder. She was also one smart woman, which is why she joined forces with England in her quest to take down France.

You see, by this point France and England had fallen out once more, with their truce only lasting two years (1343-1345) and the battle for the French throne was back on. It was, well, called the Hundred Years War for a reason.

With his country at war, things were already bad, but things started to look very unfortunate (get it?) for King Philip after he discovered that Jeanne was not only brutally murdering his ship’s crews, but also using her fleet to provide supplies to English troops in France.

Much of this particular time in Jeanne’s life has been turned into legend, meaning it is really hard to sift through and tell fact from fiction. There are tales of her plundering French fishing villages and towns, joining English ships as they invaded France, and beheading more people than Henry VIII on a really bad day.

You might think that King Philip dying in 1350 would have satisfied Jeanne’s bloodlust and stopped her quest for vengeance. But it didn’t.

It looked like only death could stop Jeanne. And it came for her around 1353, when her flagship sunk, leaving Jeanne and her two sons, Guillaume and Olivier, adrift in the middle of the sea.

Huddled together in a small boat, the mother and sons looked like they stood no chance against the elements.

Guillaume soon died from exposure and time was fast running out for Jeanne and Olivier.

But a little shipwreck wasn’t going to stop Jeanne. She didn’t stop rowing. Even after her son died, she wouldn’t stop. This lasted for five days, until both she and Olivier were picked up by Montfort forces. Their survival was nothing short of miraculous and yet, considering Jeanne, not surprising.

Following this, Jeanne and her surviving son sought exile in England. And from here, Jeanne’s story takes a very unexpected turn.

She met English Knight, Sir Walter Bentley, during her exile, and for the first time in years, she must have felt a joy that she thought had been lost forever. The pair married in 1356. Jeanne chose to leave her pirating days behind her in favor of returning to the quiet married life she’d left behind over a decade ago.

With her new husband by her side, Jeanne actually moved back to Brittany, living happily in Honnebont Castle until she died peacefully in 1359.

This article originally appeared on F Yeah History and has been reprinted with permission.

The Princess In The Tower And The Skeleton Under The Floorboards: The Story Of Sophia Dorothea