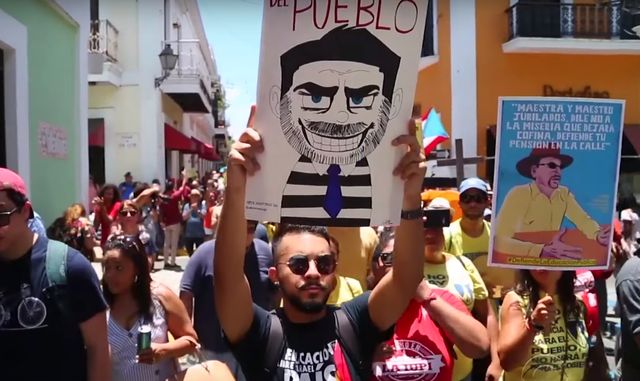 Over the weekend, Puerto Rico’s Center for Investigative Journalism leaked almost 900 pages of messages that reveal Governor Ricardo Rosselló exchanging misogynistic comments and slurs with members of his inner circle. The thousands of texts, sent through the encrypted messaging system Telegram, include homophobic taunts, slights toward political rivals, and jokes about the dead from Hurricane Maria.

The private chat group included Rosselló and 11 top aides, including Rosselló’s secretary of state, a former fiscal officer, a former communications aide, the current Interior Secretary, and the Public Affairs Secretary. As of now, four have submitted their resignations or have been fired.

On Monday, thousands of protestors filled the streets surrounding the executive mansion in San Juan, demanding Rosselló step down as well. The governor, however, refused. Instead, cops in riot gear barraged the crowds of protestors with rubber bullets, tear gas, and pepper spray.

Now dubbed #TelegramGate and #RickyLeaks, the scandal surfaces just a week after two of Rosselló’s ex-officials were arrested for siphoning over $15 million to allies for sweetheart deals.

But critiques of the governor’s leadership were escalating even before this week’s protests and last week’s arrests. Rosselló has been criticized for his handling of Hurricane Maria (failing to react swiftly and refusing to acknowledge the full extent of the storm’s destruction or its death toll) as well as his inadequate resistance to Trump. Puerto Rico’s recession has spanned over a decade, and federal financial regulation from the US has continued to tighten.

One protestor asserted, “The chat was the final straw.”