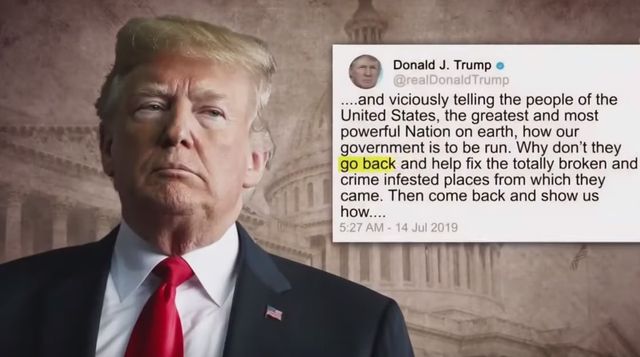 So interesting to see “Progressive” Democrat Congresswomen, who originally came from countries whose governments are a complete and total catastrophe, the worst, most corrupt and inept anywhere in the world (if they even have a functioning government at all), now loudly......

....and viciously telling the people of the United States, the greatest and most powerful Nation on earth, how our government is to be run. Why don’t they go back and help fix the totally broken and crime infested places from which they came. Then come back and show us how....

....it is done. These places need your help badly, you can’t leave fast enough. I’m sure that Nancy Pelosi would be very happy to quickly work out free travel arrangements!

Ocasio-Cortez, Tlaib, and Pressley were all born in the US, and Omar is a Somali refugee. They are all American citizens and elected representatives. So when Trump speaks of a “totally broken” place, the irony is that he’s actually describing the US. Ocasio-Cortez pointed this out in her response:

Mr. President, the country I ‘come from,’ & the country all swear to, is the United States. But given how you’ve destroyed our border with inhumane camps, all at a benefit to you & the corps who profit off them, you are absolutely right about the corruption laid at your feet.

Of course, it’s no coincidence that the four representatives Trump chose to attack are women of color. His words have everything to do with xenophobia, and they’re deeply invested in protecting whiteness. Like many of his tweets, Trump’s comments this weekend read as an attempt to frame white nationalism as patriotism, an effort to equate nativism to loyalty. He uses the preferred rhetorical strategy of propaganda machines—us vs. them, "our government” vs. “their own country,” "the greatest and most powerful Nation on earth" vs. "the worst, most corrupt and inept almost anywhere in the world"—to tout his racist message.

Enmeshed in this language are two demands: be quiet and leave. First, Trump claims that the elected Congresswomen in question have no right to voice any criticism. Even if he does recognize the need to critique our nation in order to achieve progress for it (his entire campaign relied on the image of a shattered America that needed to be made "great again"), he clearly doesn’t believe that criticism can come from anyone besides a white man. And when Trump writes that the Democratic Congresswomen should “go back” to their own countries—a phrase that is entrenched in the lexicon of white supremacy, as AOC reminds us—he isn’t just dog whistling racist voters. He’s demonstrating his outright eagerness to embrace white nationalist ideology. He’s showing us exactly who he is.

By now, Trump’s public racism has a long history. His “sh**hole country” rant and his claim that Mexican immigrants are rapists are among the most horrifying and memorable. Sunday’s tweets are the latest and perhaps the most blatant example of Trump’s indisputable racism.

But we've known for years that Trump's bent on publicizing racist rhetoric, and we know he’s committed to silencing any objections. New York Times columnist Charles M. Blow notes, too, that as disturbing as the tweets themselves is Trump’s refusal to acknowledge they’re racist. We’ve seen this pattern over and over. Trump publicizes a racist comment, insists he is not racist, and condemns everyone that calls him out. As is typical, he’s now doubling down. Trump began his day by demanding an apology from the Congresswomen and calling their responses “racist hatred.”

The absolute absurdity and childishness of Trump's "I'm not racist; you're racist" stance comes as no surprise. But Ocasio-Cortez, Omar, Tlaib, and Pressley are having none of it. AOC sums it up by saying, “You are angry because you can’t conceive of an America that includes us.”