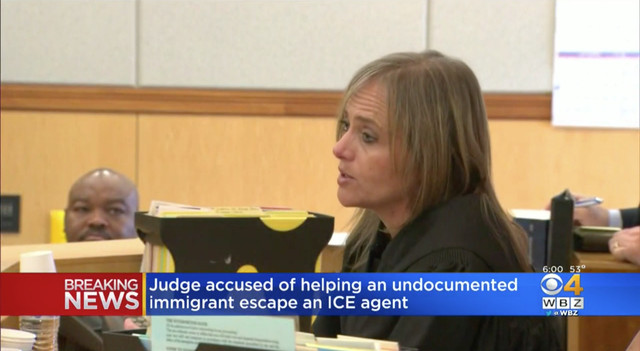 Last Thursday, Massachusetts' Newton District Court Judge Shelley Joseph and Court Officer Wesley MacGregor pleaded not guilty to charges against them for allegedly helping a defendant leave court through the back door a year ago. The defendant was facing fugitive and drug charges, and almost certainly would have been taken by a plainclothes ICE officer waiting for him in the lobby.

Joseph and MacGregor are currently facing obstruction of justice and other federal charges for being believed to be responsible in aiding defendant Oscar Manual Peguero. A recording of a sidebar conversation in the courtroom captured Joseph, the defense attorney, and the prosecutor discussing the situation of the ICE officer outside.

“My client denies that it's him... ICE is going to pick him up if he walks out the front door. But I think the best thing for us to do is to clear the fugitive issue, release him on a personal, and hope that he can avoid ICE. ...That's the best I can do.” The defendant’s attorney said. Joseph responded. “ICE is gonna get him? ...What if we detain him?”

Joseph is then heard requesting the audio recorder be turned off. It remained off for 52 seconds, and once it was back on Joseph stated that the defendant would be released. The attorney then requested to speak with the defendant and an interpreter downstairs, where MacGregor escorted them and allegedly allowed Peguero to exit out the back door.

The ACLU of Massachusetts condemned the charges against Joseph and MacGregor, claiming these actions were a part of Trump’s “anti-immigrant agenda.” Susan Church, an immigration attorney, argued that this case will only make undocumented people more afraid of the legal system than they already are.

If Joseph is guilty, though it has not been determined yet, it must be acknowledged that what she did was quite brave. She risked her career for a single person because he was at the risk of being detained by arguably the worst law enforcement agency of the federal government. ICE has been cruel and inhumane to undocumented children and adults, and under the Trump administration, there has no accountability to ensure that these officers abide by the law. If Joseph must be held responsible for allegedly allowing a man charged with non-violent crimes to exit out the back door, ICE must be held responsible for the deaths that have occurred under their watch.