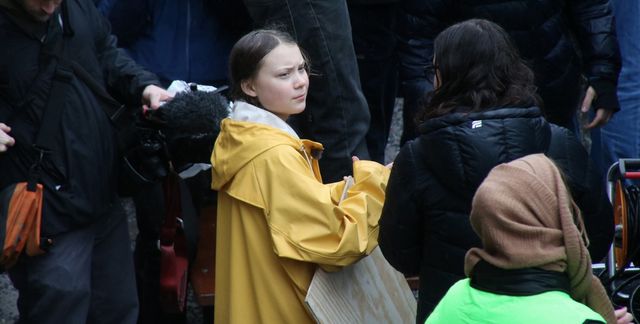 Last Friday, the marching sounds of young environmentalists could be heard throughout the world as hundreds of thousands of students walked out of class and took to the street to demand that politicians and world leaders take serious measures on the undeniable fact that our climate is in crisis.

The #FridaysForFuture movement began in August 2018 when Greta Thunberg, who, in her Twitter bio, describes herself as "a 16-year-old climate activist with Asperger," started skipping school every Friday to protest outside Sweden’s parliament.

The Swedish teen garnered worldwide attention at a United Nation’s climate summit in Poland, in which she condemned climate change negotiators as “not mature enough to tell it like it is.” Additionally, at a World Economic Forum luncheon, she directly addressed the global elites in attendance saying, “Some people, some decision-makers in particular, have known what priceless values they have been sacrificing to continue making unimaginable amounts of money. And I think many of you here today belong to that group of people.” Thunberg later commented on the absurdity of people traveling via private jet to an event about climate change. She took a 32-hour train ride.

According to CNN, Friday's strike could be one of the largest environmental protests in history. Kicking off in Australia and New Zealand, walkouts occurred in France, Japan, Germany Belgium, and the UK. A national strike was organized in Washington D.C. in company with strikes in almost all 50 states. The common demand among students is for the reduction of greenhouse gas emission. The Youth Climate Strike’s website includes a detailed agenda of demands regarding climate change, particularly that all government decisions be tied to scientific research.

Thunberg’s activism has inspired young people around the world to intensify the dialogue on climate change and provoke action from world leaders. She was recently nominated by 3 Norwegian members of parliament for this year's Nobel Peace Prize, BBC.com reports. Winning would make her the youngest recipient since Malala Yousafzai. Norwegian Socialist MP Freddy Andre Ovstegard told AFP news agency, "we have proposed Greta Thunberg because if we do nothing to halt climate change, it will be the cause of war, conflict and refugees." Thunberg addressed her nomination on Twitter saying she was "honoured and very grateful."

Honoured and very grateful for this nomination ❤️ https://t.co/axO4CAFXcz