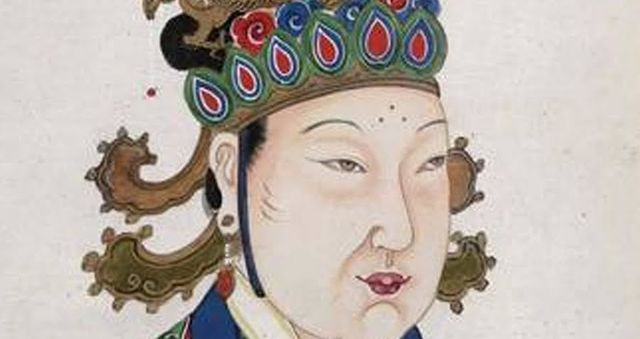 Today, we’re going to take a look at China’s first female Emperor in 3,000 years of Chinese history (!!!): Wu Zetian. A lady whose life was full of sex, scandal, murder and a neverending quest for ALL OF THE POWER.

Born in the 7th century, Wu started life lower down the social ladder. Her dad was a general and she began her career at the court of the Emperor Taizong as a concubine.

Wu worked for him until his death, at which stage the concubines were supposed to spend the rest of their lives in a convent – fuck that.

Wu ran away from the convent and went back to the court of Taizong’s son Gaouzong, starting off as a consort to the new Emperor, who was—to be frank—abbout as useful as a chocolate teapot. She advised him on pretty much everything from politics to who he kept on as advisers.

Wu was now the top concubine, but this wasn’t enough for her. She wanted to be the Emperor’s wife!

IT’S MURDER AT THE TOP

Wu needed to get the current wife, Empress Wang, out of the way, so she devised a harrowing plan to put Wang in an early grave and get herself on the throne.

She (allegedly) strangled her own infant daughter and framed the Empress for the crime.

We don’t really know if the child died at Wu’s hand, or if Wu just took advantage of the death for her own gains. But we do know that, unbelievably, it worked!

The Empress Wang AND her poor mother (?!?) were executed. Not long after that, Wu and the Emperor got hitched.

When the Emperor passed away in 683, Wu saw her chance to take over. Though Wu’s son became the Emperor Zhongzong, she kept power by being Empress Dowager.

Sadly for Zhongzhong, his reign only lasted 6 weeks, because he wouldn’t do as he was told. Wu was the real boss here, so she overthrew Zhongzhong and plonked another one of her sons on the throne.

This son behaved himself, but Wu decided she was the one doing all the work, so she should have the title. In 690, Wu declared herself Emperor.

To make sure she kept the throne, Wu set about destroying all families with any claim to it. She executed dozens of people, wiping out entire family lines. Then, to keep control over the court, Wu had a series of spies who reported all information and gossip back to her.

Empress Wu held onto her power for over half a century, even before her 15 years as Empress (690-705 to be exact). Her time as a ruler was marked by a period of economic growth and stability that rippled out into the next century. The Tang Dynasty (all of whom were her descendants) that came after her is seen as a golden period in China’s history.

There’s lots of different tales of Empress Wu’s treachery and bloodlust, but we need to remember that at the time it was unthinkable to have a woman in charge. People found it abhorrent, and historians at the time wanted to paint her as a disgrace and an abomination.

There’s no doubt Wu did some pretty questionable shiz to get hold of power and keep it (baby murder framing remains not okay) but none more so that many male rulers in China’s long and illustrious history.

We should look at Wu as an exception to the rule: she was clever and driven and, unthinkably for a woman at the time, she managed to hold onto power for decades.

No, she isn’t going to win any Nobel Peace prizes, but she’s still an interesting figure who deserves to be remembered.

We don’t just want to look back at the women who were “good.” We want a whole picture: good, bad, and everything in between.