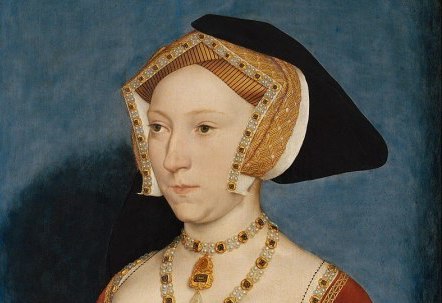 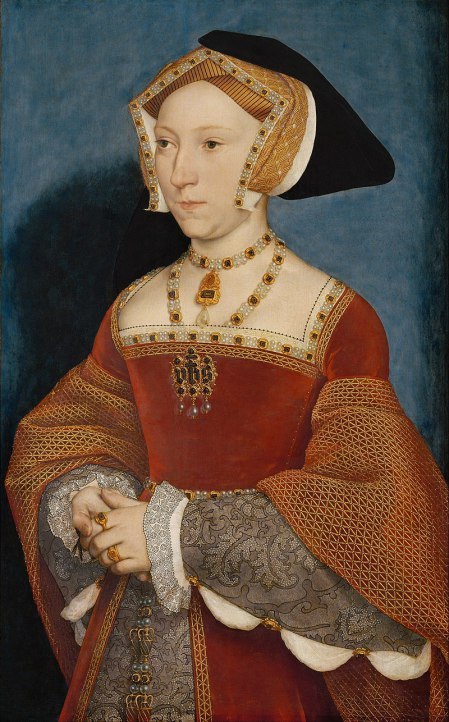 The third of Henry VIII’s wives, Jane Seymour, is mainly remembered as the one that Henry liked the most (which is kind of damning with faint praise) and erm…that’s kind of it.

She’s sort of seen as the wet flannel of his wives. Nice and mainly inoffensive, but…well, she had a reputation as boring.

BUT that couldn’t be more wrong, you see:

Jane Seymour was a wily motherfucker. And I mean that in the best way possible.

Prepare to have all your perceptions of Jane smashed!

So before we get cracking, let's have a quick recap on the life of Jane Seymour (if you want to skip this bit, just scroll down till the break and we’ll see you there!)

Most likely born in 1508, Jane was one of several children born to high-up Tudor courtiers Margery Wentworth and Sir John Seymour. Jane’s main role in life was to marry well and pop out a ton of kids (preferably boys). So she was educated to be a wife, with little emphasis on academia, and LOTS of emphasis on needlework. With her cross-stitch mastered, Jane was sent to serve Henry VIII’s first wife, Catherine of Aragon, and more crucially, snatch a rich husband.

Jane arrived at court in a huge time of upheaval. In just a couple of years, she saw Henry VIII change the country’s religion, divorce Catherine of Aragon, and marry Anne Boleyn (who she then served).

BUT by 1536 Henry was falling out of love with Anne and had his sights set on getting off with the woman who was the exact opposite of his wife. That woman was, of course, Jane.

So, with Anne proving to be pretty problematic, Henry decided to cut both his losses and Anne’s head (this is, of course, very simplified!).

The day after Anne’s execution, Jane was engaged to Henry, and the pair were married ten days later (so many red flags). Within a year, Jane was pregnant and soon gave Henry the thing he most wanted, a son.

And that’s where the story ends. Jane died on October 24, 1537, following drawn-out complications she experienced in labour.

OK, GOT ALL THAT? YES? AWESOME!

Let’s get down to business and look at just why Jane was in fact not a cute little wifey, BUT a calculating master manipulator.

Beware those in pink, because on Wednesdays they will come for you!

OK, first things first, let’s get this out the way:

DID JANE SEYMOUR PROFIT OFF OF THE DEATH OF ANNE BOLEYN?

Long answer: Yes… but it’s not that black and white!

Here’s the thing: Anne Boleyn was doomed. Her downfall plotted from all sides, it was inevitable that she would be dethroned and disposed of.

And you know what a Queen down means? A WHOLE TON OF POWER UP FOR GRABS!

With the possibility of marrying the king (or at least becoming his mistress) open, the game was well and truly on. Enter the Seymours.

The family had been on the rise for a while, but with Anne’s downfall, it looked like this could be the Seymours’ chance to cash in on some serious power and influence. Especially because Henry had already set his sights on his next love:Jane Seymour (handy that!).

And so, Jane had her family on side to advise, guide, and generally ensure she (and more importantly, they) could milk the situation for all it was worth!

Sorry Anne, this situation does include your death…

Jane utilised the demise of Anne Boleyn to her favour—by becoming the exact opposite of Anne.

Anne was outspoken, bold, and the focus of any room, so Jane made sure that, at all times, she came off as meek, mild, and shy.

That’s not to say Jane didn’t follow in any of Anne’s footsteps. In fact, she actually used same the ploy as Anne had in her early days with Henry: rebuffing his initial romances, hooking him with the thrill of the chase, and tempting with what he—the man who could have everything—couldn’t have.

But where as Anne had won Henry by turning down his initial romances with a mix of flirtation, sweetness, and ambition, Jane went for all doe-eyed Bambi innocence.

In fact, according to historian Antonia Fraser, Jane explained that she couldn’t possibly accept the king's gifts, for she had:

"Nothing in the world but her honour, which for a thousand deaths she would not wound… If the King deigned to make her a present of money, she prayed that it might be when she made an honourable marriage."

This was a seriously smart and calculated move!

Just as Anne Boleyn was entering her downfall, rumours of her alleged infidelities were spreading like wildfire. The other topic of hot court gossip? How has Jane Seymour remained a devout virgin in such a den of sexual sin? She must be an incredibly upstanding virtuous woman.

Like that, Jane secured her place as Henry’s dream girl.

But being Henry VIII’s dream girl wasn’t a walk in the park. After all, this was a man with a body count…

Which brings us to our next point on what makes Jane so ingenious:

SHE DIDN’T LOSE HER HEAD!

You see, Jane has the special role in Henry’s wives, as the only one who was never in danger in getting executed.

Catherine of Aragon was threatened with death and eventually exiled, Anne Boleyn was beheaded, Anne of Cleves divorced Henry in part to ensure she didn't end up missing a key part of her anatomy, Catherine Howard was beheaded, AND Katherine Parr just narrowly avoided execution.

And you best believe that’s a badge well-earned!

What we often forget about Jane is that she had one full year with Henry before becoming pregnant with what is now often considered her golden ticket: a boy, Edward.

That’s one year with a man who was by now a full-on tyrant, with violent mood swings galore, and one recently decapitated wife under his belt (not to mention the abused, exiled one).

To be blunt, daily life as Henry’s wife was akin to a tightrope walk over shark infested waters. 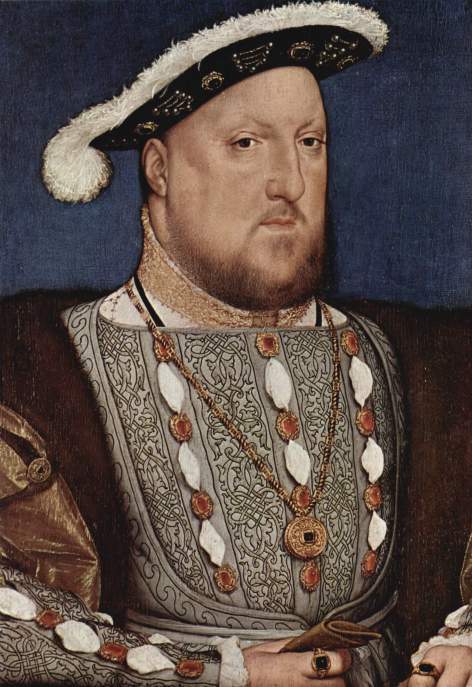 So, how did Jane survive? Well, she played the game.

Like we’ve already covered, Jane courted Henry by playing up to idea of the docile little wife he wanted. And when she was actually his wife, Jane made sure to keep the act up.

She gave herself the royal motto: "Bound to obey and serve."

Now, that isn’t to say that Jane didn’t also want to use her new power to fight for what she thought was right. Just months after her marriage, she begged Henry to restore the abbeys he had destroyed years earlier. In response, Henry reminded Jane of what happened to the last wife that disagreed with him…

After that, it seems Jane made a concerted effort to study Henry’s moods, eventually having them down to a fine art. This meant that unlike her predecessors, Jane knew when to push and more importantly, when to stop pushing. 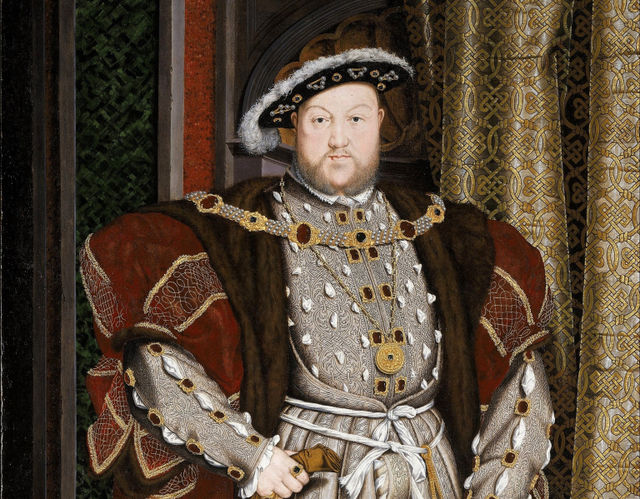 Because handling Henry VIII is more than similar to handling a pissy toddler.

Jane’s ability to handle Henry meant that she was able to bring a queen back to court.

Even before Jane and Henry were married, she was (allegedly) fighting to bring Henry’s estranged daughter, Mary, back to court. Spanish ambassador Chapuys wrote:

"I hear that, even before the arrest of the Concubine [Anne Boleyn], The King, speaking with mistress Jane of their future marriage, the latter suggested that the Princess should be replaced in her former position; and the King told her she was a fool, and ought to solicit the advancement of the children they would have between them, and not any others."

But Jane wasn’t letting this one go. She’d known Mary from her time serving Mary’s mum, Catherine of Aragon. She had watched on as Mary was cast aside and disinherited. Jane wasn’t going to let this shit continue!

So she continued quietly plugging away, getting the issue on the table under the radar, until finally Henry agreed—if (and it’s a big IF) Mary would agree his marriage to Catherine of Aragon had been invalid.

Seriously Henry, could you just try and not be the worst for one second

The idea of signing a document declaring her parents' marriage invalid broke Mary’s heart. After all, her mother had spent years fighting for that marriage's validity, losing so much in that battle.

Yet signing was Mary’s only hope at ever being able to regain her power. So she did—but she did so partly because she knew she now had a strong ally in Jane.

Mary knew that Jane had more than her back. She was one of the only people who was able to control and sway Henry. That’s one powerful person to have on side!

Mary's return led to Henry allowing his other daughter, Elizabeth (Anne’s daughter) back into his life. The little princess was invited back to court for Christmas in 1536.

That’s two queens brought back into the folds of power, a feat Jane achieved in just six months, thanks to her skill at manipulating Henry without him even realising.

And that’s what makes Jane’s death even sadder.

She had such a short time on the throne, yet this master at the long game proved she could have achieved so much, if she had just had time on her side.

So don’t overlook Jane. Sure, she was quiet, but remember: it’s the quiet ones you have to watch.

This was interesting, where can find out more? Sadly, there aren’t many books on Jane, but I’d suggest Elizabeth Norton’s biography Jane Seymour: Henry VIII's True Love. If you want an in-depth look at all the wives,  I will always suggest checking out Alison Wiers' The Six Wives Of Henry VIII.

The Four Sisters Who All Became Mistresses Of Louis XV