What Happened To The Wild Ravens Of London? 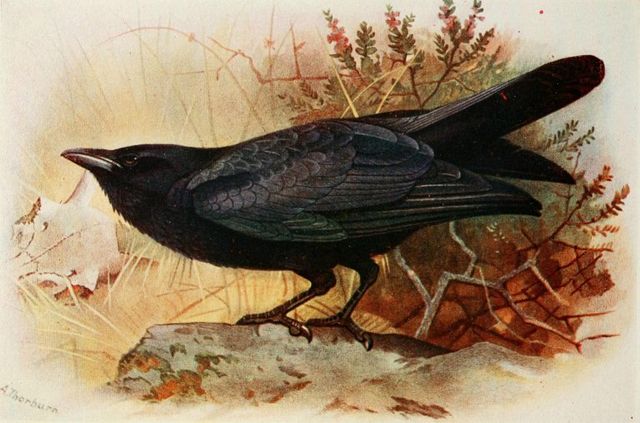 In medieval London, ravens were a common sight. By the late eighteenth century, however, they had been almost entirely eradicated. According to nineteenth century ornithologist William Henry Hudson, the last pair of wild ravens in London resided in a large elm tree in Hyde Park. This pair bred annually up until 1826 when one of the park keepers pulled down their nest, which at that time contained two of their young offspring. Deprived of their home and their young, the pair of old ravens quit the park and were never seen again.

Fortunately, this was not the end of ravens in nineteenth century Hyde Park.  One of the young ravens from the nest was retained and successfully raised by the park keeper.  This young raven was allowed complete liberty and he took full advantage of it.  He spent most of his time in the vicinity of Rotten Row and, as Hudson writes, “he came to be very well known to all those who were accustomed to walk in Hyde Park at that time.”

The young raven was a gregarious bird and often visited the workmen then engaged in the construction of John Rennie’s bridge across the Serpentine.  The workmen made a pet of him.  But not everyone was as fond of the raven. He was highly intelligent and had an eye for mischief.  His favorite activity was to slyly sidle up to an unwitting passer-by and give them a “sharp dig on the ankle with his beak.” This sort of sneak attack sometimes had unexpected benefits. As Hudson relates:

“One day a fashionably dressed lady was walking near the bridge, when all at once catching sight of the bird at her feet, on feeling its sharp beak prodding her heel, she screamed and gave a great start, and in starting dropped a valuable gold bracelet from her wrist.  No sooner did the jewel touch the ground than the raven snatched it up in his beak and flew away with it into Kensington Gardens, where it was searched for, but never found.  It was believed that he made use of one of the hollow trees in the gardens as a hiding place for plunder of this kind.” 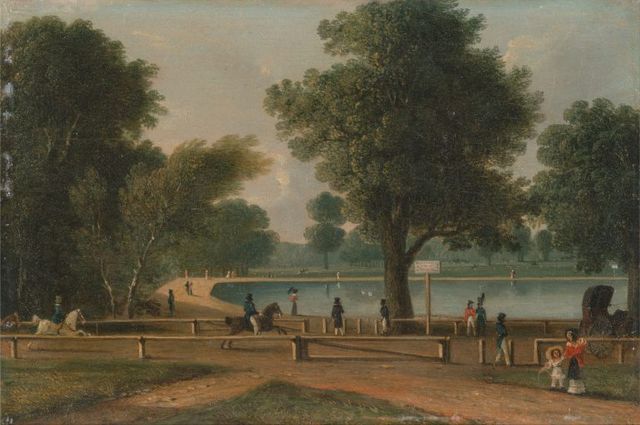 As do many animal tales of the nineteenth century, the tale of the last raven in London has a sad end.  At some point, the bird simply disappeared. It was assumed that he had been stolen. Several weeks later, he reappeared in Hyde Park with his wings clipped.  No longer the gregarious, mischievous bird that he had been before his absence, he moped about the park, clearly depressed by whatever had befallen him. According to Hudson:

“Finally one morning [he] was found dead in the Serpentine. It was surmised that he had drowned himself from grief at having been deprived of the power of flight.”

Of course, the reported last raven in London during the 1820s was by no means the actual last raven in London. In the 1850s, a keeper in Regent’s Park reported that two ravens had appeared and engaged in a “savage fight which ended in the death of one of the combatants.” In 1890, a solitary raven appeared in Kensington Gardens until a keeper captured it and took it away.

Meanwhile, there have been ravens at the Tower of London since the mid-nineteenth century. Hudson states that at the end of the nineteenth century, there were two in residence—a male and a female who worked industriously to build a nest in a tree. Eventually “for some unknown reason,” the two birds tore apart their nest and commenced building a new one in a different location. This second nest was also unsatisfactory to them. They pulled it apart and started a third nest. Hudson writes:

“After half a dozen such attempts, the cock bird, who was a strong flyer, abandoned the task altogether and took to roaming about London, possibly in search of a new mate with a better knowledge of nest-building.” 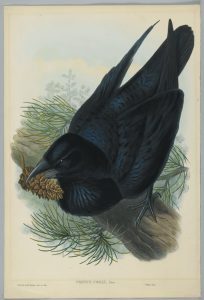 This solo male raven would fly up to a “considerable height in the air” and “soar about above the Tower.” He would then fly to St. Paul’s Cathedral and perch on the cross at the top of the dome. After having surveyed the activity on the ground at St. Paul’s, the raven was in the habit of flying down to the London docks. Every day that passed, the bird’s range was expanded until the keepers at the Tower of London were warned that if they did not clip his wings, he would soon be lost to them forever.

At last, the keepers decided to cut the raven’s wings. Unfortunately, by that time, the raven refused to be caught. Hudson writes:

“He had grown shy and suspicious, and although he came for food and to roost on one of the turrets every evening, he would not allow any person to come too near him.”

After many weeks of living in this semi-independent fashion, the male raven disappeared. It was believed that he met his end in Kensington Gardens. Meanwhile, his abandoned mate, a female raven by the name of Jenny, remained at the Tower of London. At the time of publication in 1898, she had just been provided with a new mate. 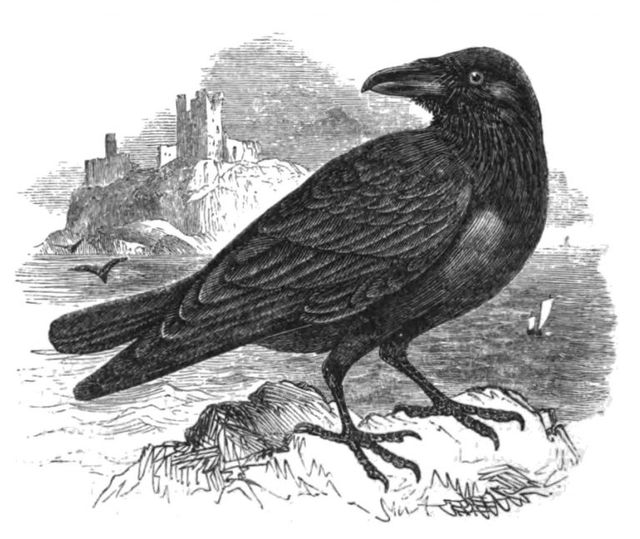 The Raven by Philip Henry Gosse, 1849. (Image from The Natural History of Birds.)

I cannot close this article without mentioning a few of the many legends and superstitions that have been connected with ravens throughout history. From as far back as Ancient Greece, the raven has been viewed with a measure of fear and something akin to awe.  Many believed that ravens were harbingers of death. In William Hazlitt’s 1905 book Faiths and Folklore, he quotes a fifteenth century source, writing, “If the superstitious man hears the raven croak from the next roof, he at once makes his will.”

Others believed that the wings of the raven carried contagion, bringing pestilence and illness wherever the bird went. Even Shakespeare makes reference to the raven as a bird of ill omen in Act IV of Othello:

Thou said’st, it comes o’er my memory,
As doth the raven o’er the infected house,
Boding to all.

Some of the raven superstitions were quite specific. In Cora Lynn Daniels 2014 Encyclopaedia of Superstitions and Folklore, she reports the old belief that if a man meets a raven on the way home from church, it is a sign that he will either develop epilepsy or die. A bit less severe is the Irish superstition: “If a raven cries at the foot of the husband’s bed, it is a sign that his relations are coming.” 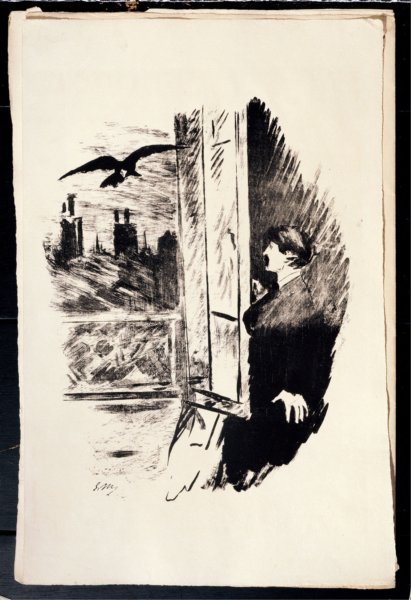 Etching for Edgar Allan Poe’s The Raven by Édouard Manet, 1875.

Hazlitt states that “of inspired birds, ravens were accounted the most prophetical.” Sometimes referred to as “the bird of the gallows,” there are numerous supporting tales of illness and death following in the immediate aftermath of a raven perching in one’s house or roosting in one’s chimney. But not every legend casts ravens as avian prophets of death. Daniels writes:

“In Sweden, the raven’s cry at night in swamps and wild moors, is held to be the ghosts of murdered men, whose bodies have been hidden in these spots by their murderers.”

While another superstition holds that the reason the raven is so reviled is because it is, in fact, an exorcised spirit. Daniels explains:

“There is a hole in the left wing, caused by the stake driven into the earth when a vampire spirit has been exorcised. One must take care not to look up when it is flying overhead, for he who sees through the hole in the wing will become a night-raven himself. This uncanny bird is ever flying toward the East, in hope of reaching the holy sepulcher, where alone it will get rest.” 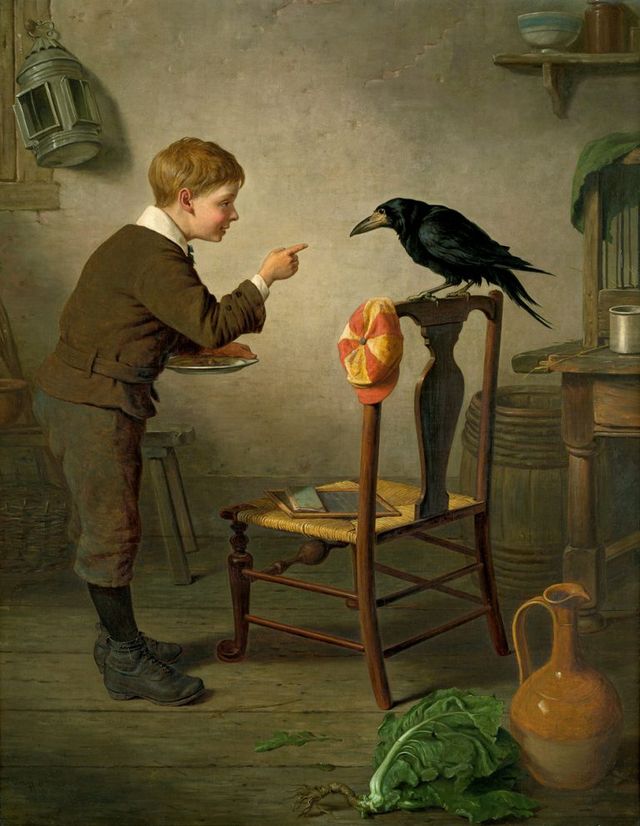 Folklore and legend aside, the common raven (corvus corax) is considered to be one of the most intelligent birds in existence. They can live 15-20 years in the wild and are able to survive in a diverse range of climates. The raven is omnivorous and is known to store his food. Ravens have also been known to use tools and their intelligence relating to problem solving has been compared to that of the human and the chimpanzee.

Clearly, the nineteenth century did not see the last ravens in London, however, unlike crows, ravens are not generally seen in more populated areas. This does not mean that they are endangered. In fact, The Royal Society for the Protection of Birds reports that there are currently 7,400 breeding pairs in the country. As for the presence of larcenous ravens in Hyde Park or bachelor ravens perched on the cross atop of St. Paul’s Cathedral, I could find no twenty-first century reports.

The Fascinating History Of Peacocks, From The Devil's Assistant To "The Most Beautiful Bird In The World"