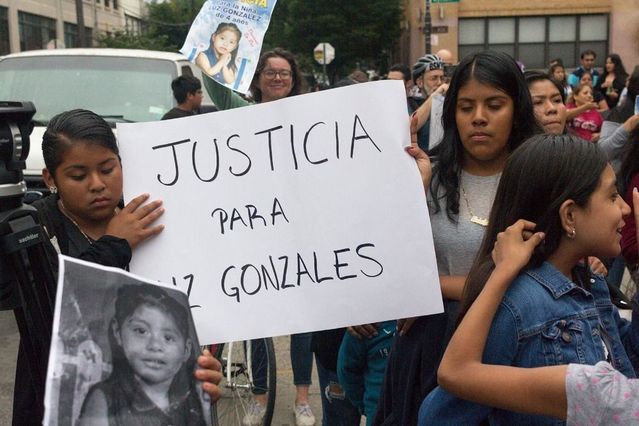 On June 24th, four-year-old Luz Gonzalez and her mother Reyna Candia were hit by an SUV outside of Clean City Laundry in Bushwick, a neighborhood in Brooklyn, New York, reports Gothamist. They were taken to Wyckoff Hospital, where Luz was pronounced dead and Reyna had her injuries treated. Meanwhile, Jeanette Maria, the driver who ran them over on the sidewalk and then fled the scene, was stopped by the police but not arrested nor charged.

Luz’s body was flown to Mexico, where their extended family still lives, and her burial was held there on July 3rd. Her parents chose not to attend the funeral because they feared not being allowed back into the US. They are in the process of seeking green cards but were worried about the increased deportations. Her parents held a memorial service in Brooklyn instead.

Gonzalez’ friends and relatives, along with local activists, have done a series of marches from the laundromat to the 83rd Precinct in Bushwick to demand an explanation for why the driver has not been convicted. On July 5th, Office Capt. Hugo Dominguez told Gothamist, "What happened was horrible. It takes time. It doesn’t mean that the lady is free—she’s entitled to due process."

According to Gothamist, neither the NYPD nor the Brooklyn District Attorney's office responded to their inquiry about Maria's rumored family connection to law enforcement. There is also a non-comfirmed rumor that the mother was threatened with deporation if she continued to press charges. City Councilmember Rafael Espinal, who represents Gonzalez's district, told Gothamist that "anyone who flees the scene of an accident should be charged."

On July 6th, the Department of Buildings verified that the parking lot was illegal and ordered it to be closed. Cars were only able to get to it by driving over the sidewalk where Luz was killed. There are still many similar parking lots remaining in Brooklyn.

The district's state senator, Martin Dilan, also did not respond to the Gothamist inquiry. However, Governer Cuomo called on the senate to pass a law to keep the speed cameras which would ensure safety, but he has not compelled the senate to meet in Albany for the vote, which he has the legal power to do.

According to Luz’s godmother, Fabiola Mendieta, Luz's parents were concerned that if they went to the funeral they would not be allowed back to New York, and therefore could no longer fight for the justice of their daughter. To help them in their fight, call the 83rd precinct at 718-574-1605 and demand justice for Luz Gonzalez, or donate to the GoFundMe created by a friend of the family to help offset the costs they have faced with her funeral.

How To Help Immgirant Families Being Separated At The Border