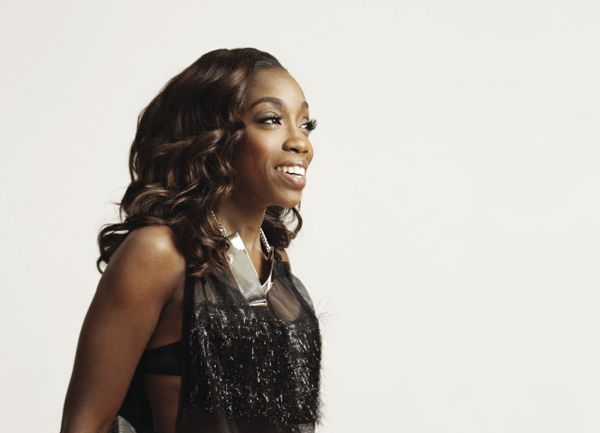 Even though it came out six years ago, the song “American Boy” is still Estelle’s claim to fame. The peppy collaboration with Kanye West earned her a Grammy, but her later singles never quite stuck. Her fourth album, True Romance (out November 4), should change all that. It’s sultry R&B at its finest, inspired by the ambiguous, confusing period in a relationship that Estelle (last name Swaray) describes as that moment “between happily ever after and breaking up.”

Estelle, who started singing in church when she was seven, is releasing True Romance on her own label (Est. 1980 Records), a company she hopes will eventually become a home for other artists who, as she puts it, “really want a career, versus one or two singles.” The record’s first single, “Make Her Say (Beat It Up),” is a sexy, heavy jam sure to soundtrack many 3 a.m. trysts, while “Conqueror” is a soulful, anthemic power ballad. Moving easily between soul, hip-hop, and R&B, Estelle uses her powerful voice and cool-girl attitude to make True Romance a delightful mashup of genres. The London-born singer called from N.Y.C. (where she’s lived for seven years) to chat about Latino men, Beyoncé, and the importance of good sex.

True Romance has a very grown-up R&B sound. Was that intentional?

Absolutely. I don’t think I could be 34 singing “American Boy.” You’d think I was a real trivial human being. Like, “Girl, you’re 30-something. Ain’t she figured this out? Ain’t she got a boy?” I don’t think it makes sense for somebody who sings what I sing to be out there, singing as though I’ve not been through anything. But everything I write has some kind of depth. Even “American Boy” was about being 27, the first time I discovered Latino men in Miami. That was where I was at that point. But I’m a grown-ass woman at this point. So what do I write about? Grown-ass woman shit. It’s about stuff that my friends and I talk about, where it’s like, “I don’t know how to handle this. Maybe I’m the one that’s fucked up.” It’s just real life. I’ve never been trivial. But the album’s still quite lighthearted in some places.

The video for “Make Her Say (Beat It Up)” is one of the sexiest things you’ve ever done. Were you nervous about that?

Not at all, I think the single is way more graphic than the actual video. But anything that I sing, I stand by. I was the one trying to egg the directors on to go further like, “Yo, put it all out there!” I think that song is an honest take on what happens when you leave a relationship. You have to figure yourself out again. And most times [when I was going through a breakup myself], I went and had sex. I went and found a couple of guys, and tested what I wanted again—who I liked, what kind of guy I liked, how I felt sexually with another person.

But still, it seemed like a very un-Estelle song.

Did anyone hear [2010’s] “Freak”? Clearly not, I guess. Maybe I left it too long, before I put out another one of these songs. “Freak” had the same kind of energy. I don’t understand why everyone was worried or nervous [about “Make Her Say”]. It’s as though people don’t expect women who are decent and classy to enjoy sex. [It’s like] unless you’re walking around over-sexualized, over-hyped, and next to naked every 10 minutes, then you’re not sexual. But there are women who go to work as nurses and get home and are freaks. There are women and guys who have office jobs and work in paper factories, who then get home and get it crackin’. And that doesn’t exclude them from wanting to listen to music like that, you know? My response is always, “Your sex life must suck if you don’t like this record, or you don’t understand what I’m doing, because I have fun.”

It’s like when people gave Beyoncé shit about her last record being so sexual.

She’s grown! She’s married and had a baby! I mean, shit. How do you think little Blue got here? Why can’t she talk about what she wants to on her album? Why can’t she express herself? Ninety percent of the people who were saying that stuff have danced to all her records—the most sexualized ones. I don’t understand it. It’s all a contradiction. [“Make Her Say”] wasn’t done to shock. It was done from a place of sincerity. I heard the beat and it sounded like sex and I was like, “Well, that’s what we’re gonna talk about.”

What do you do for fun when you’re off the road?

I’m a homebody. We party for a living, so when I get home, I just want to watch reality TV or the Discovery Channel. It’s terrible. I also watch a lot of the Cooking Channel and then cook. I enjoy cooking for my friends. My house is never empty. I also started an accessories line called Swaray. We do all things scarves, from sarongs to long, man scarves to pocket squares to beach scarves. We’re working.

Where do you keep your Grammy?

All my awards stay with my mom. I keep my Grammy, though, because I remember having a real rough period when I was like, “That’s it. Fuck it. I’m just gonna go win a Grammy.” So to actually do it at the time I wanted to was pretty awesome. I won’t say it’s in my house, but I definitely have it.

Tags: from the magazine , sexy , r&b , estelle , american boy , grown ass woman shit
Support Feminist Media!
During these troubling political times, independent feminist media is more vital than ever. If our bold, uncensored reporting on women’s issues is important to you, please consider making a donation of $5, $25, $50, or whatever you can afford, to protect and sustain BUST.com.
Thanks so much—we can’t spell BUST without U.