Holiday Trivia: How Kissing Under Mistletoe Came to Be 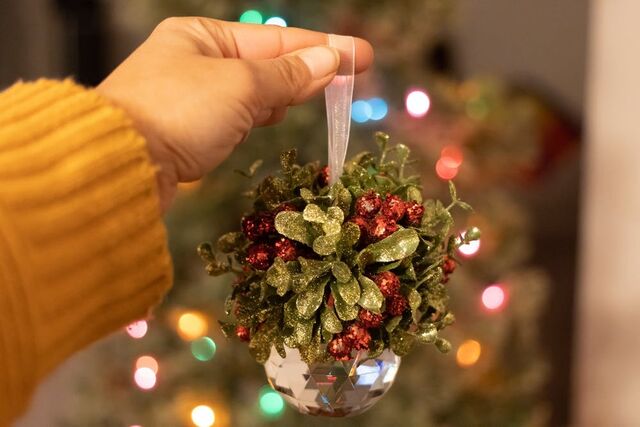 I’d always figured mistletoe for a benign holiday decoration at best, and at worst, an invitation for office-party antics in movies set in the 1980s. Aside from being a tiny bundle of green leaves and white berries under which creeps occasionally try to mouth-assault you, what exactly is mistletoe and why did people start kissing under it?

Mistletoe, or Viscum album, is a parasitic plant. There are several varieties of mistletoe, but they all attach themselves to a host tree and proceed to suck its nutrients until the host dies or weakens to a sickly, stunted state. Its berries are poisonous to humans, and use a sticky, semen-like coating to adhere to tree branches after being passed by birds.

We can thank the Vikings for the weird tradition of kissing under such a charming plant. Norse mythology states that Baldur, son of Odin and half brother of Thor, was a favorite among the gods. When he began having nightmares of his own death, his mother, Frigg, asked that the gods of just about everything (god of steel, fire, animals, disease, etc.) look out for Baldur, and keep him safe since Norse gods were not immortal. It took Loki, the trickster god, to discover that Frigg had forgotten to ask mistletoe to keep her son safe. So when a branch of mistletoe was hurled at the handsome, beloved young Baldur, he died immediately. Grief stricken and distraught, Frigg declared that mistletoe should never be overlooked again, and that instead of spreading sorrow, those who passed under it should kiss to spread joy and love.

Whether you pucker up in the name of a dead Norseman, or channel your inner Viking badass to rough up the parasite who dares to make unwanted advances under it, mistletoe will surely be ubiquitous again this holiday season.

Tags: holidays , traditions , christmas , from the magazine , plant , vikings , norse , mistletoe , viking , kissing , baldur , odin , frigg , loki , viscum album , holiday party
Support Feminist Media! During these troubling political times, independent feminist media is more vital than ever. If our bold, uncensored reporting on women’s issues is important to you, please consider making a donation of $5, $25, $50, or whatever you can afford, to protect and sustain BUST.com. Thanks so much—we can’t spell BUST without U.