A Special Sneak Peek at Our Cover Story with Community's Gillian Jacobs!

On the cult comedy Community, Gillian Jacobs’ character, Britta, is a fan favorite. Here, she dishes on her childhood as a “baby feminist,” her upcoming role on Girls, and the trouble with balls

When I meet Gillian Jacobs for lunch at Bouchon Bistro in Beverly Hills, it’s kind of a banner day. Alison Bechdel, originator of the Bechdel test—a handy way to determine whether a movie is sexist—has just been awarded a MacArthur Genius grant. (To which Jacobs enthusiastically responds, “So RAD!!”) It also happens to be the six-year anniversary of the date Community, the beloved sitcom that follows an unlikely group of tight-knit weirdos at Greendale Community College, first aired. (She knows this because Twitter told her.) On the show, Jacobs plays Britta Perry, an outspoken, political, leather-jacket wearing former anarchist and aspiring therapist. In other words, she’s complicated. And Britta’s just one of the complex characters Jacobs is bringing to life. Her current list of projects reads like the syllabus for a Feminism in Pop Culture class. In addition to starring in the seventh and final season of Community, which (after being cancelled by NBC) airs on Yahoo in January, she also plays the lead opposite Leighton Meester in Life Partners (out December 5), a film about female friendship. Plus, she’s got an upcoming role on the girliest of girl culture shows: HBO’s Girls. Details of her character, who will debut on season four in January, are under wraps —“You know I can’t,” she says when I pry for information—but we do know that she plays an artist who befriends and “challenges” Lena Dunham’s character Hannah Horvath. And the day before we meet, it was announced that she would be starring in Netflix’s newest series, Love, created by Hollywood’s patron saint of smart and talented women, Judd Apatow. So Jacobs’ current IMDB page is a veritable laundry list of awesomeness. And someone working this hard to bring well-rounded women to the forefront of entertainment deserves a delicious lunch.

The restaurant we’re in is around the corner from Rodeo Drive, one of the most bougie retail areas in Los Angeles (remember that shopping scene from Pretty Woman? It happened here). We are flanked at our white-linen-covered table by fancy dudes in business suits and polished-looking women who seem to have never broken a sweat despite the fact that it’s at least 90 degrees outside. Jacobs, whose first name is pronounced with a hard G (and yes, she’s heard every Gilligan joke you can think of) is obviously a regular here—the staff greets her warmly and our server jovially welcomes her back. But it’s clear the 32-year-old does not belong. And I mean this in the best way possible. When our waiter comes to take our order, Jacobs points to the dishes she wants rather than mangle their en francais names—“I never know how to say anything with a French pronunciation,” she says—and the outfit she’s wearing is downright nerdy. Technically her top is designer, but it’s a yellow Rachel Antonoff T-shirt featuring two tennis rackets with “Love & Other Indoor Sports” written across the chest. Her jeans are baggy and cuffed above her ankle and she’s wearing patterned socks with sneakers. Her hair is endearingly disheveled and she’s not wearing a lick of makeup. But she gives zero fucks; she is here for the food. “Before Community, I could never really afford to eat at restaurants, so now I feel like I’m making up for lost time,” she says. “I lived in New York before and people are like, ‘What are your favorite restaurants in New York?’ I’m like, ‘Uhhh, Mamoun’s Falafel? Dollar pizza…a lot of dollar pizza.’” (When our chilled tomato consommé drizzled seductively with basil oil arrives, she simply revels in it.) 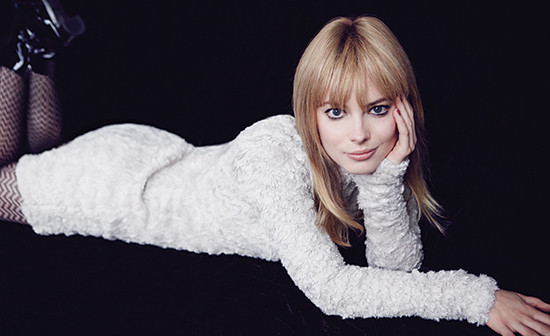 But being a nerd is something Jacobs, an only child, has had her whole life to get used to. In fact, it’s how she got into acting in the first place. “Apparently, my elementary school called my mom and told her that I was talking to myself on the playground and I had no friends,” she says, ripping a chunk of bread off the loaf that sits on the table between us. “My mom says I was a very dramatic child and that I made a big production out of everything, so she thought I would like acting. She signed me up for this class and I just fell in love with it from the start.” Outside of Pittsburgh, where she grew up, the paper would list auditions every Friday, and Jacobs was only eight when she first tried out for a local production of Hans Christian Andersen’s The Steadfast Tin Soldier. “I got it, which was, like, a very bad precedent to set for a career as an actor,” she says, laughing ruefully. From there, she dove into a slew of auditions and plays “whenever they needed kids”—dinner theater, children’s theater, musicals, classical theater. It was an auspicious beginning that primed her for The Juilliard School in New York, where she studied drama after graduating high school. (It was during this time, she tells me, that she “read many an issue of BUST. Like, a Friday night for me in college was going to the magazine section in Barnes & Noble.”) But it certainly isn’t the kind of background you’d expect from someone who’s now entrenched in the comedy world. “[Comedy] was something I always loved, but when you’re in a classical theater training program there’s not really a lot of crossover,” she says. “They’re not like, ‘Read this Friends script.’ They’re like, ‘Molière is hilarious.’”

Which is why the beginning of Jacobs’ career looked quite different from the roles she’s known for now. One of her earliest acclaimed parts was as a rape victim in a production of Cagelove off-off Broadway (the New York Times review of the performance advised readers to take note of her name). “No one would hire me for [comedy] ‘cause everything I’d done was a serious, heavy drama,” she says. “I think until someone has seen you do something, they can’t imagine you doing it.” But Dan Harmon, creator of Community, changed all that when he tapped her for the role of Britta. Then, of course, she had to figure out how to be funny. “Unlike a lot of other people I know who went to UCB or to Groundlings or Second City where they have real training in comedy, I didn’t have any of that, so I felt insecure—‘Can I really sell and deliver jokes, and make bits work?’ There are very technical things about comedy that are intimidating when you don’t have a strong background in it,” she says, a forkful of salad greens in her hand. “But the great thing about TV is working day in and day out for months with other people who are really, really good. I’ve learned so much from Jim Rash who plays the dean and from Joel McHale and Donald Glover and Ken Jeong. I felt like I got an education in comedy working on the show.” 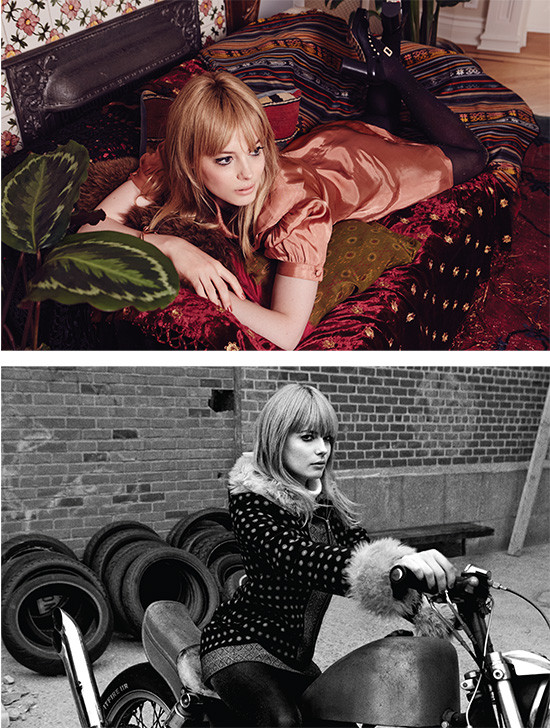 And viewers got an education in gender equality thanks to her character. When Community debuted on Thursdays on NBC, she joined the ranks of other network lady icons; Tina Fey’s Liz Lemon, Amy Poehler’s Leslie Knope, and Jacobs’ Britta Perry formed a trifecta of primetime feminists. But while Liz Lemon garnered laughs by poking fun at singledom and Leslie Knope was a Hillary Clinton wannabe, Britta became the feminist we could most relate to: idealistic, but occasionally overzealous when speaking up for what she believes in. This fervor has been the butt of a running joke throughout the series: No matter what she says, she hears a chorus of “You’re the worst” from every character on the show. (Something the outspoken among us can definitely relate to, amirite ladies?) But what’s truly refreshing about Britta is how progressive her sex life is. “I know, I love that about her,” Jacobs says. “That she and Jeff [Joel McHale] have had an on-and-off sexual relationship and it’s ultimately not that big of a deal to either one of them. She’s dated a bunch of other guys, a bunch, and contrary to the common narrative, nothing terrible has happened to her because of it.” Jacobs thinks it’s the antiquated rules of television that prevent us from seeing realistic portrayals of female sexuality more frequently. “Like, I remember there was one joke in the show about someone having a big pair of balls,” she says, “and the Standards [and Practices] note was that there had to be a pair of large balls in evidence on the character’s desk in order for us to say that line. As though someone would be like, ‘Oh, they’re not referring to testicles, I see the two large balls, OK I’m not offended now.”

Playing Britta isn’t too much of a stretch for Jacobs. In interviews and on podcasts she often refers to her younger self as a “baby feminist.” When I ask her if she actually identified with that label as a kid, or if the understanding of her beliefs came later, she regales me with a story that makes me wish I knew her in junior high. “Well, I had a mom who always tried to instill in me ideas about gender equality. I wrote an opinion paper about equal pay when I was in sixth grade. You had to basically write an argument for something so other people were like, ‘Why you should be allowed to chew gum in class,’ or ‘Why you should be allowed to wear a hat,’ and I wrote about ‘Why women should receive equal pay,’” she says. “I definitely still consider myself a feminist. I just think I’m surrounded by more people now who share these same ideas. When you’re a little kid and you’re wanting to talk about equal pay,” she interrupts herself with a laugh, “you’re not gonna find a lot of other little kids who are equally passionate about it. And I think my response to that was to become very strident about it. I think I understood as a kid that I could probably have more friends if I stopped talking about those sorts of things, but, like Britta, it made me talk about them more.”

To read the rest of Gillian's interview, pick up the Dec/Jan 2015 print edition of BUST Magazine. Subscribe now and get this shit delivered right to your mailbox!!

Tags: bust magazine , Feminist , girls , NBC , new issue , Community , actress , gillian jacobs , bust cover girl , britta
Support Feminist Media!
During these troubling political times, independent feminist media is more vital than ever. If our bold, uncensored reporting on women’s issues is important to you, please consider making a donation of $5, $25, $50, or whatever you can afford, to protect and sustain BUST.com.
Thanks so much—we can’t spell BUST without U.