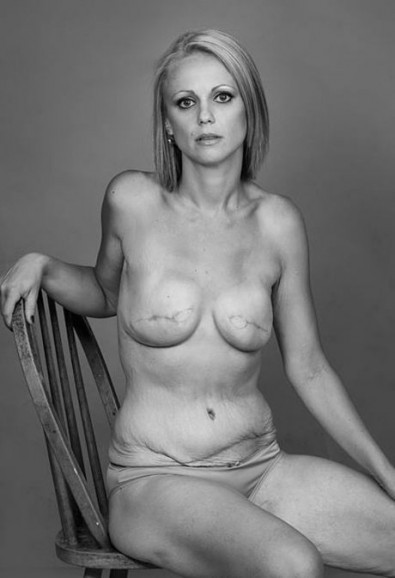 On her 32nd birthday, Beth Whaanga was diagnosed with breast cancer; valiantly fighting back against the illness, she asked her friend, the photographer Nadia Masot, to take portraits of her nude body after a double mastectomy and hysterectomy as part of Under the Red Dress, a project designed to spread awareness about regular breast and pectoral examination. The beautiful series of images features Whaanga, a mother of four, gazing fixedly at the camera, acknowledging her scars, and proudly exposing her resilient body.

In each image, she poignantly highlights each scar and mark, affixing arrows to them and labeling each procedure and side effect. She tells Mirror News, "Cancer effects people [of all genders, races, and ages] in many ways and it's important that those of us who can set the example do.” She does exactly that; her direct confrontation of the illness is an inspiring and courageous testament to the importance of awareness and an all-too-rare exploration of the powerful beauty of cancer fighters and survivors.

After receiving Facebook’s blessing, Whaanga posted the images on her page. What followed is shocking: over 100 individuals unfriended her and attempted to shut the page down, calling the images pornographic and unsuitable for children’s eyes. The shaming of this extraordinary and compassionate woman’s body is a discouraging consequence of our culture's censorship and judgement of the female body, but she maintains her right tell her story; as her sister Emma Rayner explains, "If you can't personally distinguish the difference between porn and awareness then you obviously have issues within yourself. Facebook has an age limit of 13 and over.” Brava, Beth; your images and your passion is inspiring, and we stand by you.

Writer's note: This post is dedicated to my grandmother, a sculptor, who in the depths of her illness, created clay figures of the female body, celebrating the beauty of human strength and resilience, even in the face of fear and challenges. Thank you to all the people still living who carry on this tradition of courage and internal fortitude.

Published February 23, 2014. Images via Under The Red Dress