Jessica Williams: An Interview with the Endearing Young Trailblazer 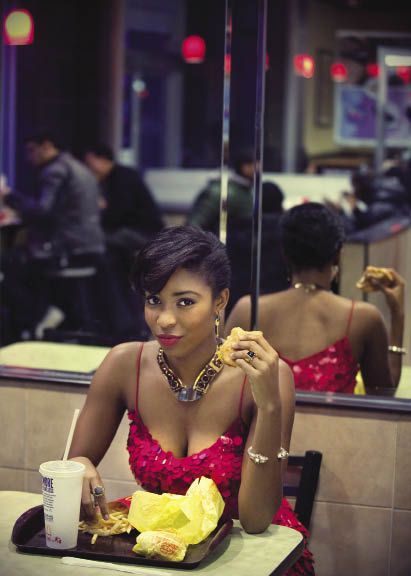 For most of us, our first job after college involves trying to keep up with people older and more seasoned than we are, adjusting to paying bills, and stumbling into adulthood. That’s pretty much been the experience of 23-year-old comic actress Jessica Williams. But as the newest, youngest, and first black female correspondent on the legendary fake news program, The Daily Show with Jon Stewart, her first job also entails searching for people of color at the Republican National Convention and portraying an enterprising Lower East Sider selling free-range rats in the wake of Hurricane Sandy.

“I do feel like a kid. I feel like the baby sometimes,” says Williams of joining the show. “I have to get used to the fact that I came straight from college, where my friends were still making out with each other by accident, to being at The Daily Show, where people are married with children.”

The transition from college student to TV star was abrupt. “I was eating lunch at the Panda Express in the quad with my best friend,” recalls Williams, who is now on a leave of absence from Cal State Long Beach, where she was studying film. She’d submitted a tape to the show at the suggestion of a casting agent she met while auditioning for a Will Ferrell movie. “My manager called and was like, ‘Hold on to your seat. The Daily Show called. Jon Stewart likes your tape and wants to fly you out to audition with him in the studio.’ I was like, ‘Holy shit.’” Days later, the California girl raised “in a Christian home with strong family values” was in New York with her mom. “We went to T.J. Maxx and got an ill-fitting suit,” she says. “My mom was like, ‘We’re on a budget but you gotta look cute!’”

“I’m still the same person I was when I moved here. Just because I’m on The Daily Show doesn’t mean I’m any less awkward.”

The Daily Show is Williams’ first grown-up job but not her first foray into television. As a teen, she starred in a short-lived Nickelodeon series, Just For Kicks. “You can’t find clips!” says Williams, sounding relieved. “I was going through puberty!” When that series ended after one season, Williams thought she had fizzled out at 16. “We got cancelled,” she says, “and I remember thinking, ‘My life is over! I’m never gonna act again!’”

Now Williams, who earned her comedy stripes performing at L.A. clubs and with the Upright Citizens Brigade while in college, regularly gets recognized on the streets of her new Williamsburg, Brooklyn, neighborhood. But despite the fact that she could pass for a model (she’s six feet tall!), Williams says, “I’m still the same person I was when I moved here. Just because I’m on The Daily Show doesn’t mean I’m any less awkward.”

While she hopes to meet the right “goofy guy” who’s secure enough to deal with her high-profile gig and frequent travel, Williams says that for now she’s happy to focus on her frequent DIY arts-and-crafts kicks, regular drinking with her new Brooklyn crew—mostly bloggers she met through friends or Tumblr—and of course, her job.

There’s a certain pressure that comes with being the “first black” anything, and Williams has dealt with her share of haters on social media. “There are some who don’t like black people being on the show,” she says, “but the fact that I’m able to do this job and talk about African American issues and politics on a program that has a large white audience is amazing to me. When I think about that, I feel how lucky I am to be here. I get to address so many issues that I don’t think I’d be able to otherwise.”

Tags: bust magazine , Williamsburg , girls , the daily show , jon stewart , interview , black female comedians , jessica williams
Support Feminist Media!
During these troubling political times, independent feminist media is more vital than ever. If our bold, uncensored reporting on women’s issues is important to you, please consider making a donation of $5, $25, $50, or whatever you can afford, to protect and sustain BUST.com.
Thanks so much—we can’t spell BUST without U.