Having A Son Makes This Mom Reconsider Masculinity 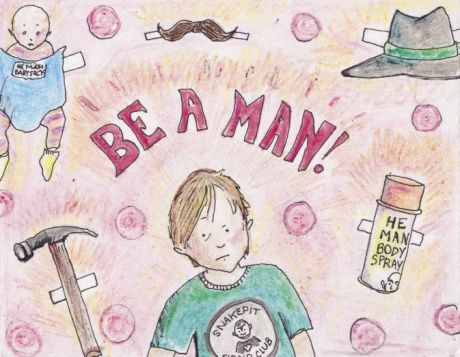 This may seem an unlikely forum in which to examine manhood as something to aim for, but let’s remember that every man on the planet owes his existence to a woman. Recently, the only dude I’ve ever given birth to turned 13. To celebrate his Not Mitzvah, I invited various adults in his orbit to contribute to a homemade instructional book, titled Be A Man! Flip through it, and you’ll see input from various friends regarding male qualities they find most essential—unsurprisingly, humor, kindness, and good listening skills won out by a landslide. My only rule when soliciting tips was that the advice had to be road-tested, so that ruled out any underage contributors, no matter how emotionally mature or beloved they might have been. The youngest contributor to the anthology is newly 21, while the oldest clocks in at over 90. For the record, the latter recommended cleaving to the Boy Scouts’ 12-point law with the possible exception of number seven (“A Scout is obedient”).

While I don’t think my boy’s in need of intervention, it’s reassuring to know we’ve got a cross-section of friends providing backup. After all, snapping one’s newborn son into an “I’m a Feminist” onesie isn’t enough to keep him on the road to righteousness. I often envy friends whose close-knit extended families live within geographic proximity. That said, I’ve never been obligated to suffer through Sunday night suppers with an in-law or uncle who insists on sharing his ultra-right-wing views at the table, so maybe it’s for the best.

The best counsel, not surprisingly, defies gender, though I do appreciate the few male-oriented specifics: always use a condom, wash your clothing before it starts to stink, and don’t buy anything scented with Axe body spray. Too bad no one mentioned keeping one’s thighs properly closed on the subway, since so many male riders seem to think that possession of a penis means you must spread your legs like a damn moth. Though on that note, another contributor did touch on our animal nature: “Don’t be afraid to not be a man. Be a lion. Be a butterfly. Be a walrus. The most beautiful souls are the outliers.”

Several gents who added advice viewed friendship as a key to manhood. “Don’t do something you know is wrong just to impress someone,” wrote a friend who’s worked hard to get out from under the ills of his misdirected youth. “Don’t be impressed by people who brag to get your friendship,” someone else added. “They are usually phonies.”

Another line of thinking that happily got a lot of repeat mentions was the idea that real men stick by their friends, even those friends that the general public would define as “weird.” Ah, to go back in time and lay some of these gems on my 13-year-old self. Among the other tips that made the list? “Do good for others,” “Don’t be afraid to change your mind,” and “Free your mind and your ass will follow.” All rock-solid directions which grownups of all ages and orientations should probably follow.

Condom reference aside, I was surprised preparedness didn’t come up. Not even from our nonagenarian Boy Scout, who presumably knows a thing or two about what it takes to go the distance. I certainly wasn’t going to be the one to suggest this virtue. Having solicited these responses less than a week before Milo’s birthday, I ran out of time to properly prepare, resorting to assembling the book on a Greyhound bus. My seatmate, an Ohio lad bound for MIT, expressed admiration for the project, but agreed that it was likely to be a slow burn in terms of its influence on Milo: as extra insurance, I brought along a Simpsons comic anthology and a game called Zombie Fluxx.

Perhaps the most unexpected advice came from my stepfather, who urged, “Always be honest with your parents. They are your best friends and will support you if you are truthful with them.” If only I’d known then what I know now.

This story appears in the Oct/Nov 2013 issue of BUST Magazine with Neko Case.
Subscribe now.