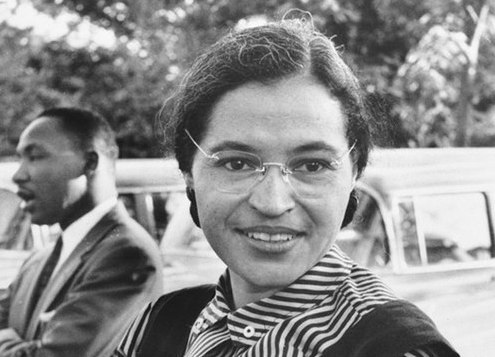 Everyone knows Rosa Parks as the quiet, humble woman who refused to give up her seat on a Montgomery, Alabama bus over 60 years ago. She is eternally personified as the gentle saint responsible for a revolution.

What many people don't know is that Parks was so much more than one occupied bus seat. She had a history of outspoken activism, and dedicated most of her life to fighting sexism, racism, and police brutality.

In 1943, Parks joined the NAACP and was elected secretary of the NAACP's Montgomery branch. During her time in this position, Parks was responsible for the documentation and investigation of racist and sexist violence. The following year, she played an integral role in the organization of the "Committee For Equal Justice for Mrs. Recy Taylor," urging justice for Taylor, a young, Black woman who had been attacked and raped by six white men, and bringing national attention to the case. The Chicago Defender called it “strongest campaign for equal justice to be seen in a decade."

Parks was also known for the passionate speeches she shared at rallies and gatherings. This intensity is immortalized in a 1931 essay in which Parks shared that she'd nearly been raped by a white employer, connecting her experience to her great-grandmother's abuse under slavery. In the essay, Parks set forth her desire to end the abuse of Black women everywhere.

After she refused to give up her seat on the bus—a deliberate act of protest that was planned in advance, inspired by a teenage girl named Claudette Colvin—and sparked the Montgomery Bus Boycott, Parks continued to work as an activist. In the 1960s and '70s, she fought against police brutality and for open housing.

A slightly different picture than the silent woman on the bus, isn't it?

That isn't to say her act of defiance on that December day should be forgotten or downplayed. But there are many other dimensions to this brave and inspiring woman that should be remembered for their very real impact.

The Story Of Recy Taylor, The Woman Oprah Honored In Her Golden Globes Speech

Tags: activism , history , civil rights , rosa parks , naacp
Support Feminist Media! During these troubling political times, independent feminist media is more vital than ever. If our bold, uncensored reporting on women’s issues is important to you, please consider making a donation of $5, $25, $50, or whatever you can afford, to protect and sustain BUST.com. Thanks so much—we can’t spell BUST without U.