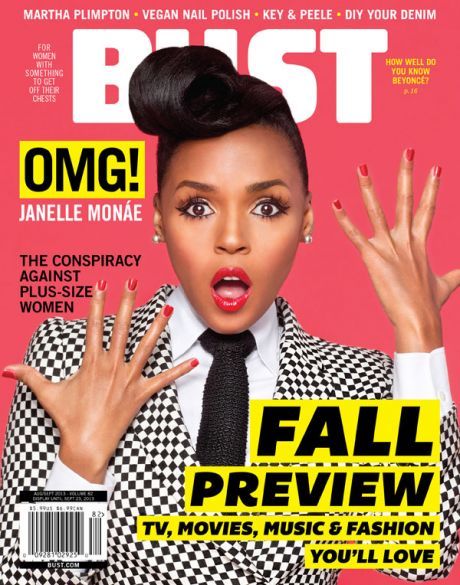 Pop star Janelle Monáe is at once retro and futuristic, disarmingly down-to-earth and freakishly abstract. Here, she reveals the strategy behind her trendsetting look, the origins of her “divinely inspired” alter ego, and what it’s like to hang out with the president

Janelle Monáe may have been born to sing, dance, and write some of the most creative pop albums ever to hit an iPod, but the world wouldn’t have known about her if it weren’t for the video for “Tightrope.” The 2010 breakout single (featuring Big Boi) made her an Internet sensation, garnering more than 11 million hits on YouTube. In the video, the 27-year-old strides on screen with a move that can only be described as an ostrich walk, then treads an imaginary tightrope with a complicated series of swishy steps that make her feet look like they’re on tiny invisible wheels. It’s the kind of routine that almost no living person could pull off without looking like a massive idiot, but Monáe can make anything look good. Plus, the song is awesome. So awesome, in fact, that it earned Monáe multiple invites to the White House to perform for the Obamas, as well as a legion of fans who can’t wait to see what she’ll come up with next.

Born in Kansas City, KS, Monáe sounds a bit like Lauryn Hill, if Hill listened to lots of show tunes and Diana Ross and then time-traveled to the year 2113. She draws inspiration from legends like Stevie Wonder and Prince, as well as Michael Jackson, who certainly would have enjoyed the “Tightrope” dance if he had lived to see it. Usually clad in black-and-white menswear (lots of tuxedos and patent-leather oxfords) and often rocking a giant pompadour that would make Elvis cry, she looks like someone from an earlier era. Her music, though, is completely modern. The ArchAndroid, her first full-length, released in 2010, is a kaleidoscopic mix of soul, R&B, funk, and pop, and features cameos from fellow iconoclasts like Saul Williams and Of Montreal’s Kevin Barnes. It is an ambitious record, but she still manages the rare feat of achieving mainstream success without compromising her artistic vision.

It’s her artistic vision, however, where things get complicated with Monáe, especially if you’re a label exec looking for a radio hit. The ArchAndroid actually consists of chapters two and three of an ongoing sci-fi saga that began in 2007 with Monáe’s debut EP, Metropolis: Suite I (The Chase). The epic tale follows her alter ego Cindi Mayweather, an android sent to free citizens of the future city Metropolis from the oppressive regime of the Great Divide, which uses time travel to suppress freedom and love. Monáe has called Cindi the mediator between the oppressed and the oppressor, quoting the 1927 sci-fi film Metropolis to explain, “‘The mediator between head and hands must be the heart,’ and Cindi is the heart.” Think Neo from The Matrix, but smarter.

Monáe is so committed to her Cindi persona that she gives up very little straightforward information about her personal life. When I ask her a series of innocuous questions about her day-to-day activities, I’m met with a confusing volley of totally out-there responses.

Do you have any pets?

“A pet llama. The grandson of Michael Jackson’s pet llama at Neverland.”

What do you do for fun when you’re not on the road?

“Skiing in my backyard, eating with Einstein’s nephew, and giving lectures at Spelman College.”

Are you single or in a relationship?

“I’m in an open relationship with two androids and a cyborg.”

It’s surprising, given sound bites like these, that Monáe has become the face of such mainstream brands as CoverGirl and Sonos. But despite all the billboards bearing her luminous likeness, she hasn’t forgotten her origins. Not long ago, she was living in a boarding house, selling copies of her self-produced EP, The Audition, for five bucks a pop. It wasn’t until 2006 that she caught her big break, working with Big Boi on the Outkast soundtrack Idlewild. He was so impressed that he told his friend Sean Combs (aka Diddy) to check out her tunes, and before long, she had a contract with Diddy’s label, Bad Boy Records. The aforementioned Metropolis: Suite I (The Chase) failed to make much of an impact, but The ArchAndroid debuted at number 17 on the Billboard 200 and earned spots on the 2010 year-end best lists of The Village Voice, Spin, NME, Vibe, and Pitchfork.

Her highly anticipated sophomore album, The Electric Lady, is due out this fall, and while Cindi Mayweather’s goals have changed slightly since The ArchAndroid, Monáe’s unique approach to her music has not. In the spring, she released a video for the single “Q.U.E.E.N.” that found her paired with Erykah Badu in, according to the female narrator, “a Living Museum, where legendary rebels from throughout history are frozen in suspended animation.” The clip also features a skull-shaped record player, a poodle with hair teased to match Badu’s, and Cindi/Janelle leading a chorus line of dancers in mod minidresses. 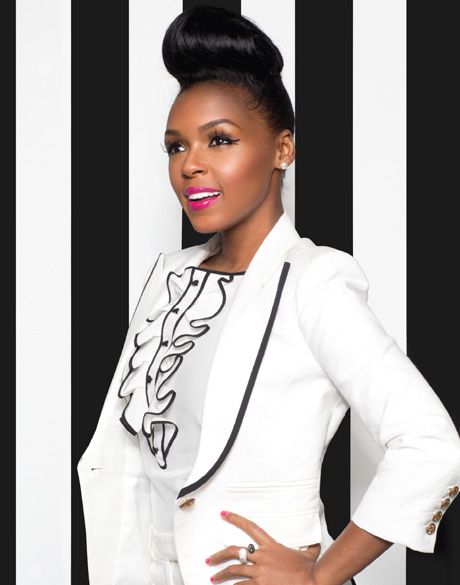 Monáe took a break from finishing up her new LP in Atlanta to chat with BUST about what really makes the woman beneath the pompadour tick.

When did you first start singing?

I don’t remember. Singing is part of my DNA. Both sides of my family are musically inclined. I had living-room training. That’s when you go in a living room and sing in front of everybody, and then everybody sings with each other.

What was it like for you growing up in Kansas City?

I grew up in a very big family. My mom has nine sisters and two brothers, so right now I have over 50 first cousins. I never really had any need for outside friends because my family was enough for me. My parents both worked really hard. We were living from check to check, but I never felt like I was in need of anything. My mom supported me when I decided to get into the arts, and it was a great moment for us when I decided to do talent showcases. My family would watch us rehearse and then take me [to the shows] in a little two-door Dodge. The hardest thing for me has been being away from my family. My mother is moving to Atlanta, so I’m excited about that, and my sister is moving to Atlanta too, so I’m really excited about having them here with me.

Before you started making albums, you studied drama at a conservatory in New York. What led to that interest?

As great as Kansas and my family were, I wanted to leave after high school. I wanted to hone my craft, get better as a performer, and be involved with musical theater. But most importantly, I really just wanted a ticket out of Kansas City. I didn’t finish, but I learned a lot about myself. I grew up in predominantly African-American schools, so it was a culture shock for me when I moved to New York because I was the only black girl in my classes. I had to adjust, and people had to adjust to me. I also learned that I didn’t want to be in musical theater. I think it’s the control freak in me. I didn’t want to go from audition to audition and have my success be dependent on what I look like and whether or not I’m right for the role. So I started to plan for my future: to own my own label and write songs, plays, and concept albums that I could have full creative control over. 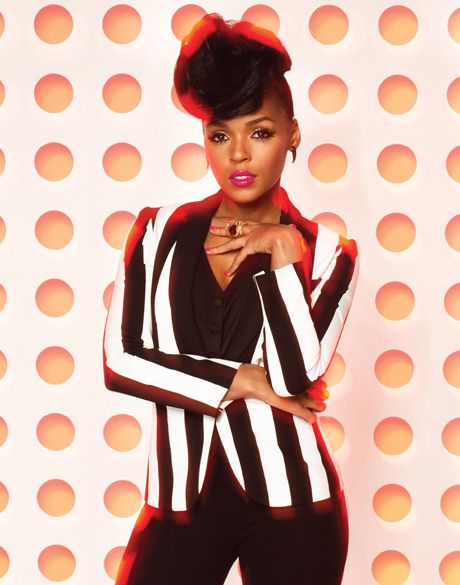 How did you support yourself before your music career took off?

After high school, I needed money to go to New York, but nobody would hire me. Then this lady from my church who was the supervisor at a cleaning service said, “Come here and I’ll hire you.” I was the youngest maid there, and all the women would ask me to sing while we cleaned. I was the only one with a clean record. A lot of the women were ex-convicts trying to get back on their feet. That was one of the most interesting jobs I’ve had. Then, when I moved to Atlanta, I worked at Office Depot. I got fired from that job because they caught me using the computer at the store to respond to my fans who had seen me perform. After that, I didn’t work any more. It was time. It was all or nothing. I pressed my own EP, The Audition, and I sold it for five dollars while living in a boarding house with five other girls.

Your last album, The ArchAndroid, referenced Fritz Lang’s Metropolis and had a very sci-fi feel. How did you get so into science fiction?

I would always watch The Twilight Zone with my grandmother, and I knew about Star Wars and things. But when I met [my producing partners] Chuck Lightning and Nate Wonder, they got me into Isaac Asimov, artificial intelligence, and cybernetics. Chuck asked me to watch Metropolis, and I was like, Wow. I saw the parallels between growing up in Kansas City and the have-nots living underground, working for the haves. That constant struggle was something I could identify with because my parents worked day and night, trying to make a living. I thought science fiction was a great way of talking about the future. It doesn’t make people feel like you’re talking about things that are happening right now, so they don’t feel like you’re talking down to them. It gives the listener a different perspective.

To read the complete interview, pick up the Aug/Sept 2013 issue of BUST Magazine. On newsstands now.

Tags: janelle Monae , interview , pop , female musician , pop singer
Support Feminist Media!
During these troubling political times, independent feminist media is more vital than ever. If our bold, uncensored reporting on women’s issues is important to you, please consider making a donation of $5, $25, $50, or whatever you can afford, to protect and sustain BUST.com.
Thanks so much—we can’t spell BUST without U.