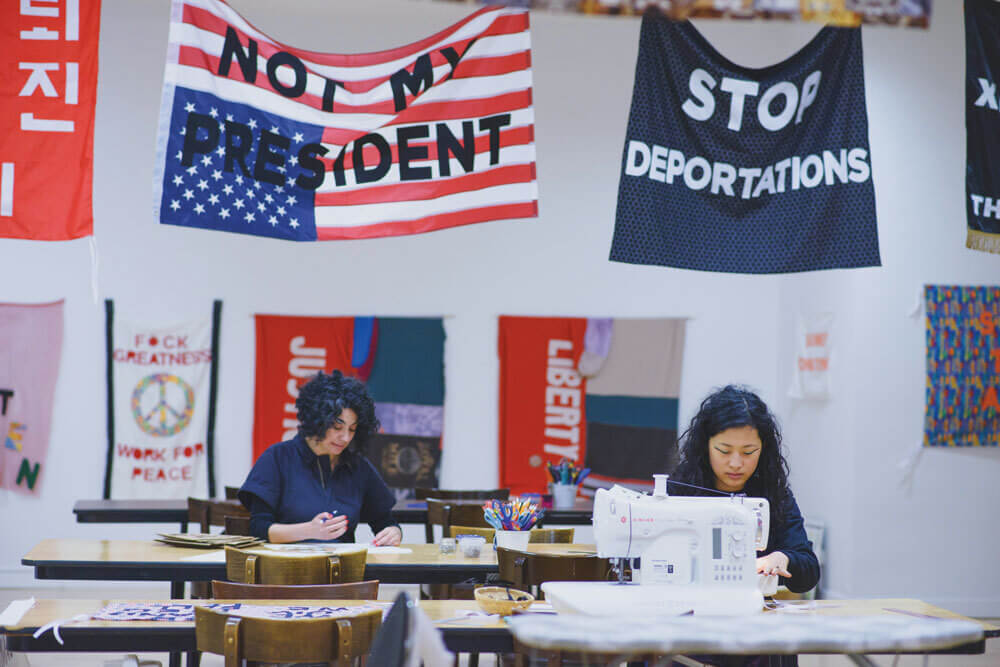 Aram Han Sifuentes’ Protest Banner Lending Library began in 2016 out of a desire to have a voice when she felt like she had none. After Donald Trump was elected, Sifuentes recalls feeling devastated. Especially since—as someone whose family immigrated from Korea to California when she was a child—she wasn’t a citizen and couldn’t vote. “So much of [Trump’s platform] was about demonizing the immigrant population,” she says, “but immigrants like me don’t have a say in what directly impacts our safety.” Using sewing techniques she learned at age six, the fiber artist gathered whatever materials she had on hand and began making colorful protest banners decorated with a variety of pro-immigrant and social justice slogans, including, America Was Never Great, Stop Deportations, and Trust Black Womxn.

A new mom at the time, Sifuentes wasn’t comfortable going to protests herself, but she shared her banners on social media and people began volunteering to take them to rallies. Soon, activists also began asking how they were made, “So, I started doing workshops and other people started donating their protest banners to be borrowed,” she says, explaining how the collection that became the Protest Banner Lending Library got started. Since then, Sifuentes has led workshops all over the world, from Chicago—where she now resides and where her main lending library is based—all the way to the Netherlands, generating around 3,000 banners that can be found through her website.

When asked why she feels it’s not only important to create her own art, but also to teach skills like sewing to others, she explains, “When it comes to revolution, you can’t just make one banner and it’s over. It’s really important to share skills like making banners so that people know, can keep going, and can share with other people—it grows that way.”