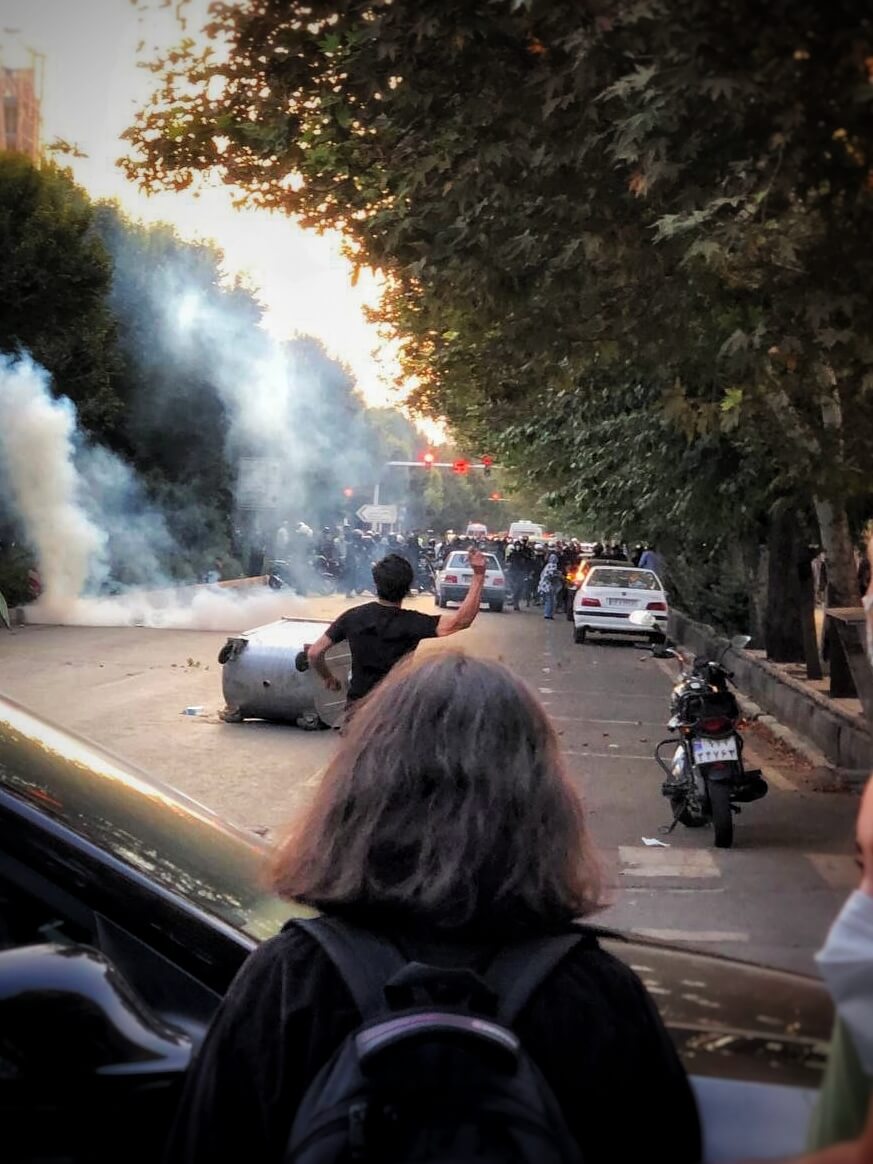 For the first time since the 1979 Iranian Revolution and birth of the Islamic Republic, Persian women and men have taken to the streets to fight for justice for women. Combatting police brutality, an unjust government, and decades of systemic oppression, the Iranian people have come together by the thousands to fight for women’s rights and claim the freedom that has been cruelly seized from them. A recent tragedy has lit a fire in the belly of a nation, sparking  cries for liberation that are being heard around the world.

On September 13, a 22 year-old woman, Mahsa Amini, was arrested by the morality police in the Iranian capital of Tehran for wearing her hijab incorrectly and not complying with the nationwide veiling laws. After her arrest, she was allegedly tortured for three days before dying in custody on September 16, and, according to CNN, “Iranian officials said that she died last Friday after suffering a ‘heart attack’ and falling into a coma following her arrest.” Her father, Amjad Amini, immediately denounced this claim, and told BBC Persia on Wednesday that “They’re lying. They’re telling lies. Everything is a lie … no matter how much I begged, they wouldn’t let me see my daughter.” Her horrific death has sparked outrage throughout the nation, and reportedly, following her funeral on Saturday, protests have ensued in various cities including Tehran, Orumieh, Gonbad-e Kavous, Kermanshah, Amol, and more.

Unprecedented scenes in Iran: woman sits on top of utility box and cuts her hair in main square in Kerman to protest death of Mahsa Amini after her arrest by the morality police. People clap their hands and chant “Death to the dictator.” #مهسا_امینی pic.twitter.com/2oyuKV80Ac

Men, women, and children have taken to the streets to demand justice for Amini’s family, and for themselves. In these flash protests, citizens have clashed with the police, and there has been a significant amount of blood shed. Amnesty International reports that they have “recorded the deaths of six men, one woman and one child during protests on 19 and 20 September in the provinces of Kurdistan (4), Kermanshah (2) and West Azerbaijan (2). Of these, at least four died from injuries sustained from security forces firing metal pellets at close range.” Another human rights organization, Hengaw, has reported that at least 450 people have been injured while participating in the protests.

Women in Iran have 10x the balls as any man in Russia. https://t.co/FUicqKmMSW

For six days now, women have been marching in the streets, burning their hijabs, and calling out for justice for this young woman’s tragic death. Videos and photos of women chanting, fighting back against the police, and cutting their hair have been going viral on Twitter and Instagram. According to CNN, “Footage shows some protesters chanting, ‘Women, life, freedom.’ Others can be seen setting up bonfires, scuffling with police, or removing and burning their headscarves – as well as destroying posters of the country’s Supreme Leader and shouting, ‘Death to the dictator.’ In one video in Tehran, young protesters march around a bonfire on the street at night, chanting: ‘We are the children of war. Come on and fight, and we’ll fight back.’”

Women of Iran-Saghez removed their headscarves in protest against the murder of Mahsa Amini 22 Yr old woman by hijab police and chanting:

Removing hijab is a punishable crime in Iran. We call on women and men around the world to show solidarity. #مهسا_امینی pic.twitter.com/ActEYqOr1Q

As feminists, we can, of course, all feel empathy with the women fighting for their rights in Iran, but I, personally, feel especially connected to this strife, despite the fact that I am geographically removed from the situation in Iran. For one thing, Amini was only 22 years old, and I happen to turn 22 next week. But also, my own family fled Iran. My father is Iranian, and he immigrated to New York in 1979 at just 10 years old alongside my grandparents and two uncles. My grandfather, being a Persian Jew, anticipated a second Holocaust and fearing what was to come with the new Islamic regime (after the last Shah was overthrown), left everything behind to start over in the United States. Eventually, my entire family immigrated to the United States, and they now are spread out between Long Island, New York and Los Angeles, California.

My grandmother often tells me that she knew that they had no choice but to move when it became compulsory for women to wear hijabs. According to BBC News, “Following the 1979 Islamic Revolution, authorities in Iran imposed a mandatory dress code requiring all women to wear a headscarf and loose-fitting clothing that disguises their figures in public.” While there have been movements online in recent years to combat this oppressive dress code, there have never been protests of this scale against the hijab laws. The last mass protests occurred in 2019, following the rise in gas prices. Moreover, the “morality police” who are arresting, imprisoning, and in many cases beating citizens for not abiding by the law, are reportedly “also known as “The Gasht-e Ershad (Guidance Patrols) are special police units tasked with ensuring the respect of Islamic morals and detaining people who are perceived to be "improperly" dressed.” To make things worse, the veiling laws have only gotten stricter since the revolution 43 years ago, as BBC News reports that “President Ebrahim Raisi, a hard-line cleric who was elected last year, signed an order on 15 August to enforce a new list of restrictions. They included the introduction of surveillance cameras to monitor and fine unveiled women or refer them for "counselling", and a mandatory prison sentence for any Iranian who questioned or posted content against the hijab rules online.”

internet in iran is being shut down partly in iran.
instagram also has been blocked and access to whatsapp has been restricted.
Now it's your turn to be our voice,for we have always been your voice for freedom!#Mahsa_Amini #مهسا_امینی #OpIran pic.twitter.com/gNZb5J2Yaf

In order to shut down the protests and silence the voices of the people, according to Netblocks, the government has shut down access to Instagram and Whatsapp and there have been blackouts (no internet service) in cities nationwide. To help the Iranian people obtain their freedom, spread the word about what is going on, and use your social media to empower them. You can also donate to the organizations Children of Persia and My Stealthy Freedom to aid the Iranian people.