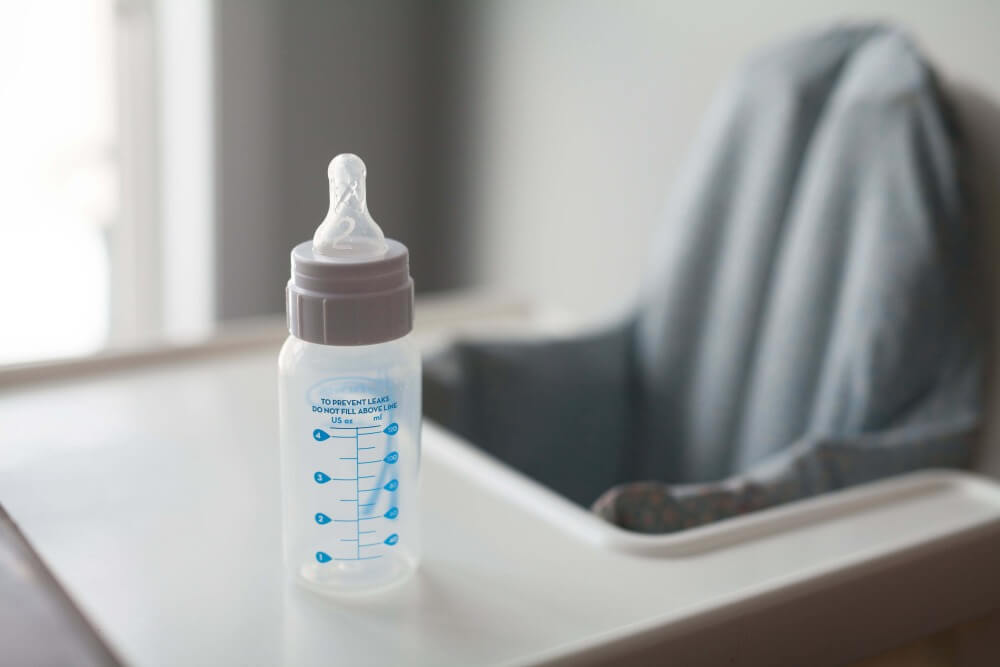 We’re still in the midst of a nationwide formula shortage, but that apparently isn’t stopping formula companies from aggressively marketing their products to potential consumers—whether or not they're planning on having a baby!

On July 16, Twitter user @melancholynsex uploaded a thread alleging that one week after purchasing a pregnancy test from Walgreens using their rewards card, they had been sent a package from Enfamil containing baby formula. Besides criticizing the waste of a product which has recently become a scarce commodity, they chastised formula company Enfamil for sending free formula without being sure the recipient needed it, pointing out that if they were “desperately trying to get pregnant,” that package would be “a kick to the face,” and that if an abusive partner had intercepted the package, that could potentially put the recipient in harm’s way. In the wake of Roe v. Wade’s overturn, this kind of marketing can elicit a special sort of worry—what data can companies collect about reproductive choices, and how will they use it?

Dear @Walgreens I received this package today a week after purchasing a pregnancy test at your store. I was asked to take the test by my doctor despite having no Fallopian tubes. 1/X pic.twitter.com/EZTsTPf7jd

Walgreens responded to the thread claiming that they “did not provide individual customer purchase information to Enfamil.” Enfamil also responded, claiming that their promotional programs were carried out on an “opt-in” basis, wherein those receiving communications had to provide consent beforehand to either Enfamil or a partner organization. Both of these statements are vague, and the companies’ privacy policies do little to clear things up. Walgreens does collect personal information from consumers, including purchases—they also claim that while they don’t sell this information, they do share it under certain circumstances, including within loyalty programs.

Enfamil’s privacy policy states that they may collect information from other sources, including third-parties. They may also use this information to draw inferences about consumers, including inferences about what products they might be interested in. Prior buying habits, then, could be used to guess that a consumer may want to try Enfamil’s baby formula, even if they aren’t absolutely sure that a baby is on the way. However, the program which sends out free samples of formula, called “Family Beginnings,” does require a sign up from Enfamil’s website. How exactly one could opt-in to Enfamil’s promotional program through partners is unspecified.

Based on the purposeful murkiness surrounding data collection and usage, it’s hard to infer exactly how a package of formula got sent to someone with no use for it. However, it’s not a new occurrence, though our hyper-vigilance post-Roe may make it feel like that. Formula companies have long participated in aggressive advertising campaigns, even to the detriment of parents, as well as the confusion of non-parents. In 2018 NBC found years of online complaints about receiving formula from another industry giant, Similac, despite not having or planning on having a baby. This style of marketing is based on aggressively pushing product onto people who may not have used it without the exposure—of course, some slip through the cracks.

Baby formula marketing has become enough of an issue to attract attention beyond the Twitterverse and US news outlets. Even the World Health Organization has brought attention to this problem. They recently published a study exposing the pervasive practice of digitally marketing baby formula, in which companies utilize algorithms, private messages, and even influencers to promote their product. And while this study is new, the WHO’s criticism of the formula industry goes far back. They published an international code on formula marketing back in 1981, and are still tirelessly defending its merit today. The updated 2017 version of the code declares that the general public should not be exposed to any kind of formula advertising, period. The United States has never made a great effort to adhere to that rule, and as such, formula companies continue to target potential consumers—even those without infants.

It’s essential for the health of infants across the country, and for the sanity of their parents, that formula supply levels are restored. Formula remains an important option for many parents, especially considering the social and cultural barriers to breastfeeding. However, the reports of receiving formula despite not needing it reveals that the formula industry is much less concerned with providing an alternative to breastfeeding than getting as many products out to as many consumers as possible. If that means some formula goes to waste in the midst of a shortage, well, that’s just business.

Photo by Lisa Johnson from Burst